.
Having spent my first week and a bit in Wight revisiting my places of happiest last-time memories – those of them that are the kind that stand revisiting, that is – I decided, the last couple of days, it was about time to get a little more adventurous.
I’ve not really investigated the bottom left hand corner of the island, judging the Needles and Alum Bay not a repeatable item, but there are lots of Downs and walks down thataway, and after my muddy 2008 disappointment with the Tennyson Trail I haven’t done any of the Tennyson stuff, so I decided on a first bite. Fred and I headed for Tennyson Downs, but we came first upon a nice, comfy car-park for the Compton Downs and decided to give them a go instead. They are a delightful, open-sky walk, steadily uphill, along a path which bisects .. the local golf course. It’s the only golf course I know which slopes, sometimes quite aggressively, all one way. Up, Or down, depending.
From the downs you get some splendid geographical views of the island, lots of fresh air, and also a nice glance over Freshwater Bay, with its background of white cliffs. 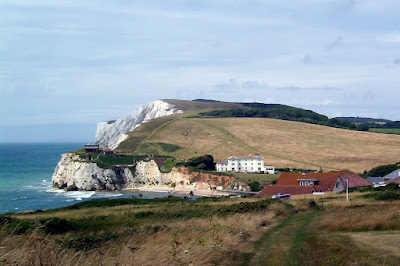 I’d been told I should go down to the Bay, so I did (12 percent steep), and was glad. It is charming. It has just the Victorian air that I like, in spite of two glossy but tasteful modern blocks of holiday apartments. I imagined the hotel – which looked sadly deserted under the greying sky – bustling with colourful but correct holidaymakers… yes, it seems a sweet place. 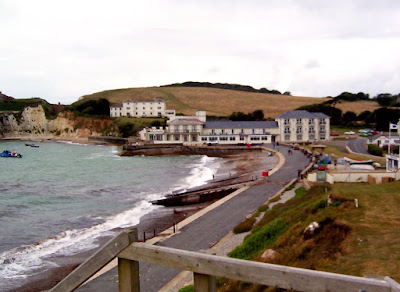 Since the sky now started dropping a little water, I decided against further walking, and set out in search of a new lunch-place to add to my list. Brightstone has been perhaps my most-visited village on the Island, but although I’ve visited and photographed and posted, I’ve never eaten there, so …
The Three Bishops Pub is an attractive place, manned by nice people, but I should have known … swings for children and a charabanc in the carpark? It’s a ‘family’ place. Fittingly, the sandwich was ‘hearty’ and served with decidedly hearty lettuce and … who in the world invented this idea of serving potato crisps with a sandwich? Everybody’s doing it these days (including Raffles Hotel Singapore) and I think it’s dire. Impossible to get just a plain beer and sandwich anywhere. And you’re up for eight or nine quid. I’ll have to start doing a packed lunch.

Today was to be Bonchurch. Andrew and Wendy Lamb and I walked round Bonchurch last year, but we didn’t see much, so I thought I’d try again, as I’d been tipped I might find a nice lunch there (I do think of other things than food, you understand). Well, if Yarmouth isn’t made for cars, Bonchurch even more isn’t. Especially when the one, steep road into town is under excavation, and several large trucks at once want to get down there while trying not seriously to crush the cars insanely parked down one side. I managed to get to the waterfront, appreciated the sea, and drove on towards the ‘sights’ and the ‘food’. But it was no use. You can’t stop anywhere (except when waiting for traffic to unblock), so I passed the 11th century church and Swinburne’s home (now an event centre), renounced the pretty café, and scrambled in second gear up the switchback hill to the main road.
Too hard. Life was meant to be easy. And so was lunch 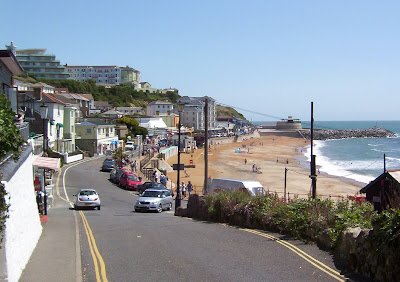 So I headed back to the Esplanade at Ventnor, paid my pound to park, and sat down in the bright sun (hurrah, at last!) on the terrace at the attractive looking ‘Ale and Oyster’ bar-restaurant. The Ale and Oyster is, actually, slightly responsible for my being here at all. It has some holiday flats above it, and on my first visit with the Lambs, two years ago, I spotted them and thought ‘maybe I could…’.
If I had, I suspect I’d be eating downstairs most days. I had a very nice bowl of what was called Portuguese Fish Soup, reeking of coriander, and a ginger-ale shandy (tut! they didn’t have ginger beer) and it cost me no more than my beer-and-sandwich jobs of earlier days. 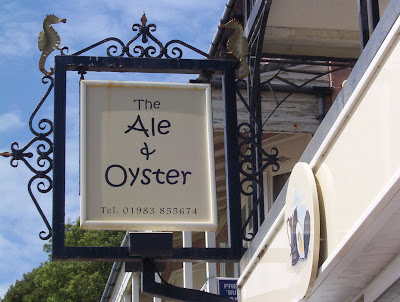 Their full meal menu is rather more pocket-stretching, but I’ll be stretching. This could be a good find. And sitting on the Esplanade at Ventnor, that delightful and characterful little street (even that bucktooth new block of grey-blue flats is starting to melt into the landscape), on a nice day, is really something of a joy. 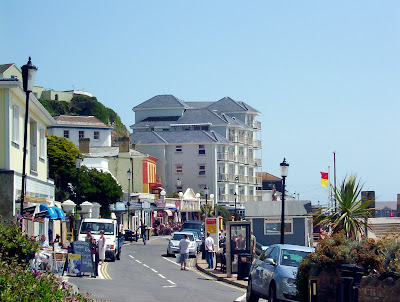 Imagine if they pedestrianised it ….
Heavens, 10.30pm. And I haven’t even thought about tomorrow’s .. no, not lunch, jaunt..
Ummm. Maybe the Ale and Oyster...?
Posted by GEROLSTEIN at 2:40 PM