Brian visited Les Baux, and carried me off to his petite maison rose (see last year’s blog) in the Mayennais (sic) village of Couptrain.
I’ve been here now a week and a half, and – since we did all the tourisme in the near vicinity last year – we haven’t felt obliged to rush around ‘doing things’. We paid a repeat visit to the delicious little restaurant at St Aignan which I’d enjoyed so much last year (and this year the menu was … andouilette!), we paid a fresh visit to infinitely-flowery Bagnoles de l’Orme, on market day, and I was even more sunnily charmed than last year. 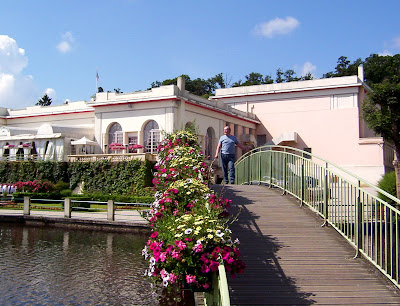 We dined with Kathy and Dean of British musical theatre repute (see last year’s blog), and – tenors really do seem to be my motto this year, from Berlin to Les Baux – we visited Bruce (tenor) and Christopher (chef) who live (with their ferocious hounds, Jason and Buffalo) in an amazing ancient batisse which was once a factory turning out candles for the Holy See in Rome. The hooks where the candles were stocked are still there in what is now the garage, as are countless other traces of the place’s origins, in both the huge stone house and the lovely gardens.
Bruce, I should explain, is the well-known American coloratura tenor Bruce Brewer, now retired from performing and teaching music here. He has also done a great deal of research on bel canto tenors, which overlaps a little with my own research on Victorian Vocalists, so we have a great deal in common.
I don’t know how I managed to get (left to right) Brian, Christopher and Bruceand a tiny part of the garden in a photo without Jason and Buffalo burying their canines in my right ankle, but I did and here it is. 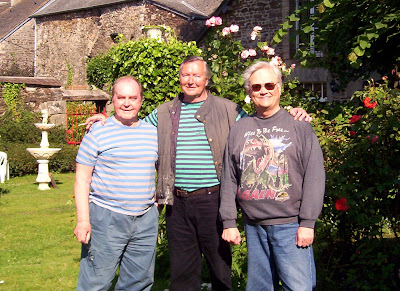 I don’t know if I’ve ever mentioned it, but – apart from horse-racing – my sporting passion (non-participant) has long been cycling. The return to racing of L Armstrong and his unhealthy peers and the vagaries of the repugnant Astana batallion and their like have rather diluted my once unbounded enthusiasm for such as the Tour de France, and I’ve now turned my interest rather onto French national races. So I’ve been delighted not only to catch (today) the French national road race championships on telly, but to have this week’s Boucles de la Mayenne, stage two, pass – centimetres from me and my lens -- directly in front of the ‘la petite maison rose’. I took this photo from our very doorstep. It’s only the second time in my life I’ve actually grabbed an in-the-flesh glimpse of pro riders sweeping by (the first was in Monaco about 1970), so I consider it memorable. 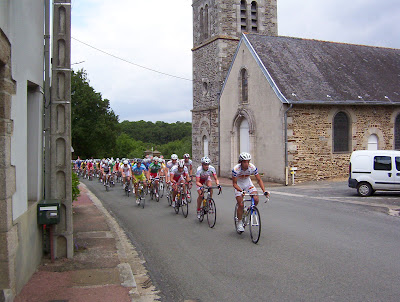 And now, come morning, I’m off to Ablon, and a hostelry named the Jolly Pig, to Honfleur, to Ouistreham and its ferry … and on 1 July I shall arrive, once more, in the Isle of Wight. Of which more anon.
Posted by GEROLSTEIN at 5:11 AM

Hi Kurt, just remembered about your domain name www.ganzl.com which is still set up. It's paid up for another year I think as I guess you paid for 10 years way way back in 2000. Was it really that long ago?
I've pointed www.ganzl.com to your blog here as your old web site is no longer around, I guess it used to be part of your friend's (Paul?) web site.
I pop in from time to time to see where you're currently located in the world. So currently the IOW?
Anyway, how are you?
I'm doing well and had a great time in India in April. I did a blog (www.winchcombe.org/india2009) which turned out to be quite addictive, whenever I could find an internet connection.

Welcome to my place!

Your India blog looks famous. Can the Taj Mahal compete, though, with Quarr Abbey??

Bring the family down during July and check it out.

I think a decade between meetings is a tad too long.