The Second Time Around

Coming back to somewhere you’ve enjoyed as very much as I did, last year, the Isle of Wight, is a risky business. With the element of discovery, of thrilled surprise at finding something new and unexpectedly delicious, now gone, will it be the same? Will love be lovelier the second time around. Or even as lovely?
I’ve been here a week now, so what is the answer? The answer is ‘yes’ and ‘not always’.
The weather has been a bit diffident, off and on, so I’ve done rather more Victorian Vocalists than I intended, rather less walking, and Red Fred has been earning his keep rather easily. But, between the greynesses and cloudbursts, I’ve still got around a bit.
All started dazzlingly well. Fred in fine form and Hermitage Court Farm the same lovely, cosy white haven of peace and friendliness as before. My first venture was across the downs to Niton, and wow! they must have known I was coming. I whinged last year about the nettles and briars on steep Bury Lane? Someone has been down there since then and sheared back the greenery and even metalled the worst part of the track: it’s a doddle now. So much a doddle, that the 25-minute stroll from ‘home’ to the White Lion at Niton is a distinct possibility. Of which I’ve taken advantage three times already!
I climbed the downs to Mr Hoy’s monument, and to the Pepperpot (which doesn’t smell of sheep urine this year and has a smart new information board), and took Bury Lane down to the Medical Centre where the delightful Dr Hill (guarded by a series of blonded dragons, but I got past!) gave me my hay-fever jab, approved my blood-pressure, and began a serious investigation into my perhaps-not-vanished Bug. Lord, even the Doctors are decidedly fanciable here.
As soon as Fred and the weather were compatible, I took a swift zoom round my favourite route of last year. Starting at Chale Green, and … what! My sweet little grocery is gone and a posh grocery-deli-tea room is in its place. Well, I’ve now tried all three thirds of the new Chale Green Stores and … Bravo, Chale Green! A veritable hit!
On to Brightstone, Mottistone, a glimpse at Yarmouth (where the roundabout is so full of no-entry signs that you never get into Yarmouth, just chucked round and out of it), and on towards Shalfleet … I resisted the temptation to visit Newtown and the New Inn (that’s for tomorrow), and zoomed back through the impossible streets of Calbourne… ah, yes, all’s well. Everything’s just as I left it. 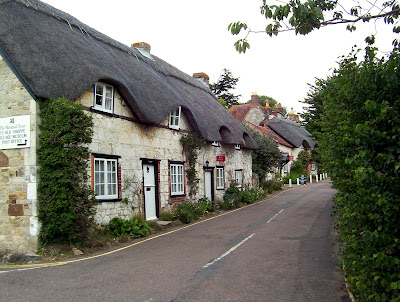 Next trip was a Fredderie over to Bembridge, down stage right, where I’m going to be staying for a couple of days later on. Quarr Abbey is sort of ‘on the way’, so I decided to take 15 minutes out for a ‘feeling of God’s love’ in the glorious church there. 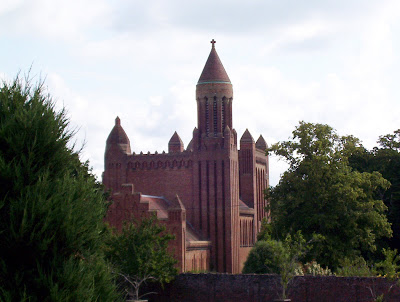 Funny. The place was smaller than I remembered. Less impressive. Though the grounds are still oddly empty of folk. Never mind, the church is still the most wondrous I know, even if the edge was taken off my pleasure in it by a new sign telling ‘visitors’ they can’t walk down the nave. This time, there actually was a monk in view, sitting in a pew in the nave. But he didn’t want to talk to me, as he was – no, not praying – simply plugged into his ipod. Hmm. God speaks in mysterious ways. He told me to go away and keep my original memories. So I went and visited the monastery’s graveyard: the old part is memorably chaste and impressive. A simple cross, a name and a Latin date. No frills. Suitable. Memorable. 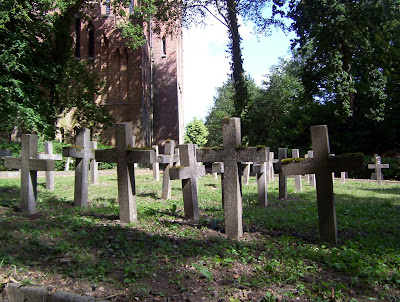 I scuttled through Brading (no, I am resisting the commercialised Roman Villa) and on to Bembridge. Well! After the spaciousness of St Catherine’s Downs, Bembridge is … er .. cluttered. How do you drive down those streets in anything bigger than a Suzuki Alto? And where do you park? Well, I guess I’ll find out next week! I am a little nervous. One day I must learn to parallel park.
Today’s trip was Ventnor. Firstly, because I like it. Secondly, because ATMs are rare in Wight and if you want cash (using a card involves a fee below ten quid) you have to go there. I paid a pound to park my car while visiting the bank. Of course, being in Ventnor, lunch at the Spyglass Inn was inevitable. The view is still lovely, the ham still good, but … my lunch at Chale Green for the same price was much better .. I think a blog entry on food in Wight is brewing…
Well, tomorrow I’m doing the other Big Test. After some other kinds of tests at the doctor, I’m going to drive out to Newtown and to lunch at the New Inn, Shalfleet. Please let it be as good as before ... I’m pretty sure it will be, just as I’m pretty sure that I’m more into the left-hand side of this island than the right…
and St Catherine’s Downs, and my big white bed the most of all.
Good night.
Posted by GEROLSTEIN at 1:11 PM