.
I have to say I didn’t really want to go to Bembridge. I didn’t want to drag myself from my comfy cocoon on St Catherine’s Downs and trek to another corner of the island to a place which my recce of recently had left me with an impression of being drowned in motor vehicles. When I asked glumly ‘what about Bembridge?’, the only answer I got was ‘it’s OK, if you like crazy Colonels’, when I asked about eating opportunities, I got silence. Then someone ventured timidly ‘Bembridge is nice’.
Well, I’m just back from three nights in Bembridge, and there’s no need to be timid about it: Bembridge is nice. And – even though I didn’t met any Colonels, crazy or not – I had a really nice time.
Thanks to Jayne’s arrangements, I stayed at ‘Breakfast with Tiffany’s’ – a super B&B run by Tiffany and Richard Buckley (just to explain the name) – within walking distance of everything and with all my priorities thoroughly cared for: whizzbang wifi, nice, comfy bed, aggressive shower in spotless bathroom, no noise (except actor son Jamie singing in the shower), and a breakfast fit for a condemned man (10 points extra for the Greek yoghurt!).
The walking bit was important, because on my arrival I nabbed an open-ended parking space right opposite the front door, and there was no way I was moving Red Fred (see roof below) out of it until it was time for him to take me home. 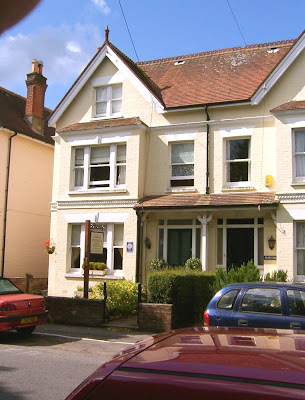 Bembridge boasts of being the largest ‘village’ in Europe, with 5,000 inhabitants. All I can say is, it doesn’t feel like it. It feels deliciously cosy, and the sunny several hours I got while there were sufficient for me to do the rounds: down to the shore, along the beach, through the back streets and the woods, taking in as I went each of the village’s four pubs. Well, I had a kind of competition on, to see if I could get served a schooner of extra-dry sherry …
Bembridge beach is fun. It has that splendidly antiquey flavour that I like … there were little boys playing bucket-and-spade, beating granny at cricket, swinging on an old tyre, and dipping shrimping-nets into the sea, and there was even a lass on a horse ... heaven! Who needs the south of Spain or a cruise ship when you can have this? I snapped heaps of photos, but alas my beloved Kodak CX4230 is dying, so I can say to the lady who wasn’t at all sure about my photographing her wee boys and their nets: it’s OK, it didn’t come out.
There were also rows and rows of sea-wasted Victorian sea walls, sticking up from the sands like stumps of old teeth, dripping with green weed.. . little pools with odd crustacea .. oh! give me this before Majorca any day! 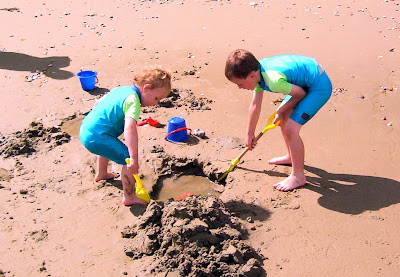 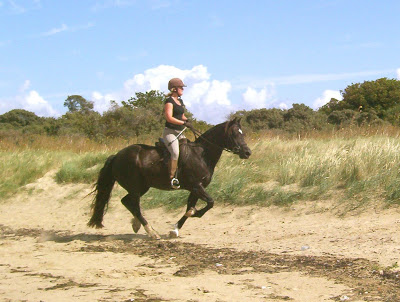 I wandered the beach happily, and finally came upon the very decorative Crab and Lobster: the first pub, with a nice wee lawn overlooking the sea. They had the sherry, but not the schooner, so I settled for a wine glass and sat watching the water and the rusty old ships… until it was time to plunge on. Alas! I finally walked too far, out of Bembridge, and came instead to an enormous caravan-park cum campsite. Not at all my sort of thing, so I hightailed it back through the woods and, eventually, back into the tiny town and to the Windmill, which is almost too elegant to call a pub. Excellent tio pepe, but the bad news that nobody manufactures schooners any more.
After a lazy afternoon, I girded my loins to go in search of food. I’m not really a pub eater, I like my restaurants ... and I hadn’t spotted one amongst the few dozen Bembridge shops. But I was wrong. Fox’s doesn’t exactly shout at you, and when you see the words ‘fully licensed’ and look closer, you aren’t quite sure what you are in for. The décor is calm and pleasantly un-nicknackish, the menu is decidedly slim (hurrah, it’ll be fresh!), but there are posters in the window and the lady of the place is serving in slacks and a t-shirt. Am I going to get resto food or caff food…? Well, I’ll tell you: you get utterly splendid food! I shall sum up simply by saying I ate at Fox’s the two best restaurant meals I’ve had since ... since Didier’s rabbit, perhaps? Yes, two. Because I went right back the next night. Night one, homemade (definitely) crab soup, fresh-fished lemon sole with baby spuds and crisp mange-tout, and a bottle of pink bubbly; night two something splendid with shrimp or baby cray, mint, radish (yes! fab touch) and a piquant sauce, followed by the most magnificent piece of hake (merlu, as I know it) in a light lobster sauce, and a bottle of French white… and much too much drambuie! 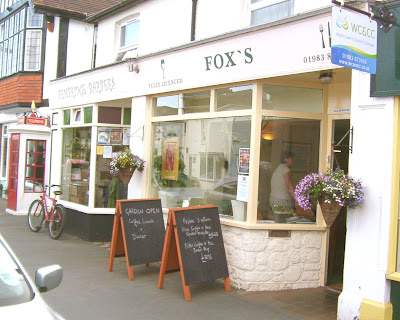 So Bembridge really has it all. Great bed, great breakfast, great beach, and great food. What could one ask for more?
Oh, the sherry contest? Well, I had two pubs left to go. The very unpretentious ‘local’, the Village Inn, and the Pilot Boat, a rather gloomy and ill-situated place (right on the main road), where I’m told you eat well. You don’t drink well. I got medium sweet sherry in a tumbler. But the Village Inn? Hurrah for the good old ‘local’: fine sherry, the right glass, a comfy pub seat, jolly blokes behind the bar … so the Village Inn got the prize. The prize? Fox’s doesn’t open Sundays, so I went back and had my Farewell-to-Bembridge dinner there last night. First-class bangers and mash!
And now I’m back on my home Downs, and Bembridge is just a memory. But I’ll have to go back next year … for another helping of hake, if nothing else!
Posted by GEROLSTEIN at 8:20 AM