The Welsh soldier who wasn't ...

I have just enough time before Sunday lunch, to assuage my curiosity as to the "who was" of this fine young Welsh soldier .... 5-foot-eight, eyes of brown ... 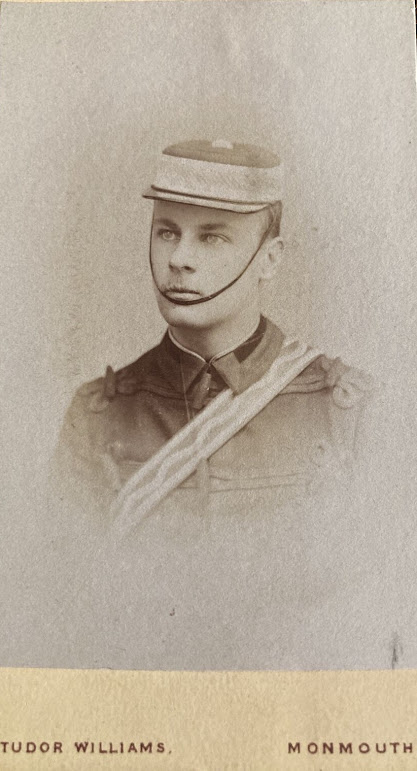 If you are clever, you can decipher his signature on the back ... and then .... begin. In Wales? No. In India. 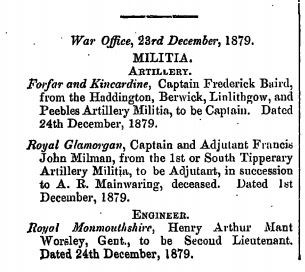 He didn't stick it long. In March 1883, he resigned his commission. He was going on the stage. 'He had private means and had joined the profession for the love of it'. 'Light and eccentric comedy'. Pantomime in Cardiff (1883), the Duc des Ifs in Olivette (1885), panto at Bath (1886), stage manager for Vivienne Dallas, Nelson Theatre (1887). Then in was 'business manager' for Pitt Hardacre (1888-9) 'Captain H Mant-Worsley'. Lieutenant, surely.

The theatre occupied him for a good half-dozen years, but by 1893 he has become Secretary to the Corunna Waterworks Co Ltd of Austinfriars. He also married (17 September 1893), Edith Augusta Showler, the daughter of a Lincolnshire gentleman, but she died the next year in what I'm guessing was childbirth. In 1895 he is Secretary of the Westralian Gold Properties (Ltd). But that didn't work either.

Finally, he remarried (1899) Miss Annie Arbuckle Hannay, settled in Bristol, started a family, and became -- an antiquarian and antiques dealer.

Margaret became a schoolteacher and never married.
Joyce married a young man from Leicestershire, John Arthur Bennett in 1921. His father worked in the yearn trade in Wigston Magna, but in the 1911 census, little John is with his aunt, a grocer in Nottingham. The marriage was of short duration: John died at the age of 26, in 1925, and Joyce married (very quickly) William Walter Allen Mason (1894-1960)  electrical engineer, airman and aircraft engineer/inspector.
I see them together in the 1939 listings, with three blacked out lines following their entry. Children?
There is something odd here, though. I find it hard to believe that there were two William Walter Allen Masons born in India within twelve months. One on 8 April 1894, the other on 8 March 1895. By Walter William Mason out of Lizzie Allen. So who is the 'Willie W A Mason' who married Irene F L Fish in 1914, had a son and, according to the family historians, died aged 37. I don't think so. This looks faintly like a little touch of ...bigamy!
If Joyce's story is a bit obfuscated, what then of Ursula's? Ursula married, in 1945, aged 44. She married a man twenty years older, Timothy Arthur O'Keeffe (b 12 November 1880), who if he hadn't 'been married seven times before' certainly had a track record. From his last brief marriage, the sometime clerk from Cork had achieved entry into Debrett. Annie Evelyn Ireland Kay of Cowper House, Dover, had been a baronet's daughter, knocking fifty when she married Mr O'Keeffe. Anyway, after a couple of years, Tim got caught screwing around, and Annie divorced him loudly. I'm sure there were other wives before and after Annie, but anyway, Tim declared himself 'independent' ... and in 1945 he wed Ursula. She had seven years of him. Then on 14 February 1953 she boarded a ship to the Orient .. with or without husband, I know not.  Three weeks later she was dead, in hospital at Malacca.
Did Tim re-re-marry?  Lord knows, but when he died in Dublin, 30 July 1966, he left a very tidy 64,000L ... I wonder where that had come from.
Father in law 'Mant' Worsley left just a few hundred. 'Independent means' don't last forever ...
Posted by GEROLSTEIN at 11:14 PM