Holworthy: a jigsaw with missing pieces

This morning's dabble in the ebay shop of 'One Moment in Time' brought its usual bundle of edible-looking puzzles .. so I went for a little group which clearly belonged together ....   The last owner had labelled them 'Holdsworthy'. So that person can't have been closely related!

The HOLWORTHY family 'lords of the manor of Elsworth, Cambridgeshire' were a typical English gentry family. Army officers, endless Reverends, Esqs and Gents, Jamaican planters (and lots of Matthews and Desboroughs), but a generation further on they had become big in the non-sinecureless and moreprofitable world of buying and selling, trading and export/import. The two sons of the sometime British Chaplain to the Hague, the Reverend William Holworthy (d 27 December 1838) and his wife Sarah Churchill née Turner (m 1818), after their return to Blickling and Erpingham in 1836, both got involved in American, South American and Antipodean trading (and doubtlesss the oriental and African tours as well). And prospered mightily. 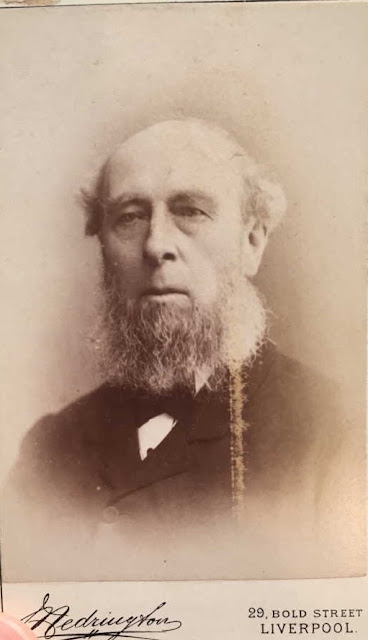 He carried on business, in the 1850s, from New York, in partnership with a succession of others, married American, [Lydia] Alice Sprague, and father his first seven children there before returning to Britain, in April 1862, to take up residence at Toxteth Park's 5 Belvidere Road, with his family (now five children) and seven servants. 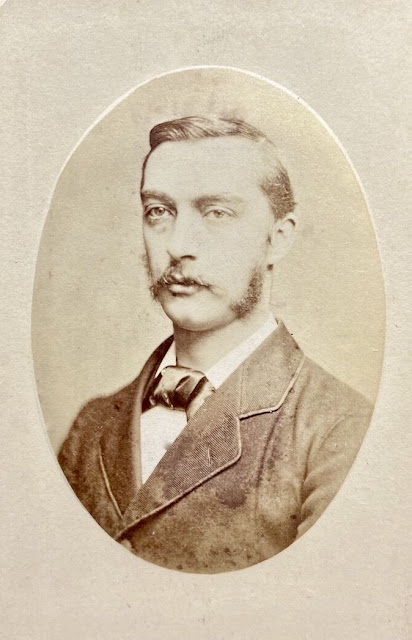 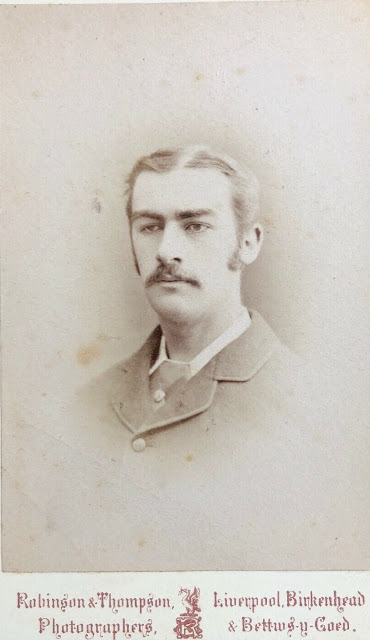 Both were brought up to the world of commerce and international trading, but didn't really last the course. Matthew died aged 39, unmarried ... Charles married Alice Fitzherbert 'only daughter of the late Sir William Fitzherbert' 'formerly Lady Buckley' (d Eastbourne, NZ 1 November 1910), and they latterly lived in New Zealand where they died in 1910 within less than a fortnight of each other. 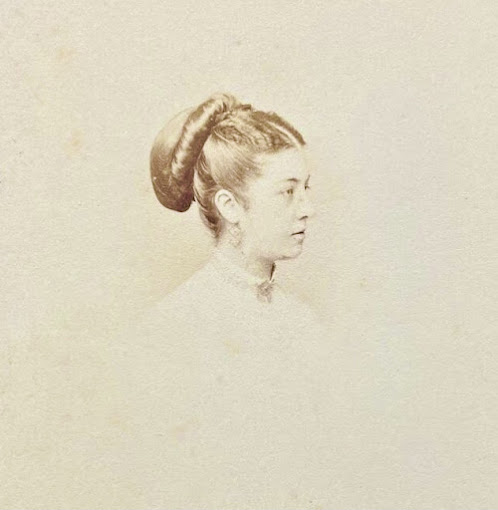 Alice married architect Arthur Parry Fry, 25 October 1883, but their only child died in infancy. Aerhur must have been a good architect. When he died at Cheltenham 3 April 1919, he left his widow nearly 15,000L. 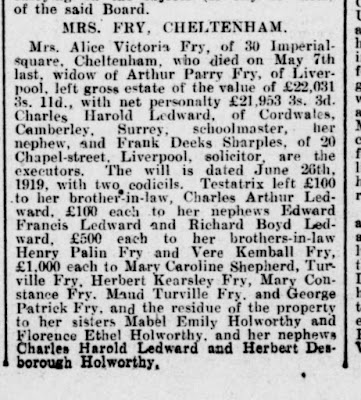 So, who else do we have? Seemingly no more of W T's children.

We have a sweet-looking Sarah of 1884 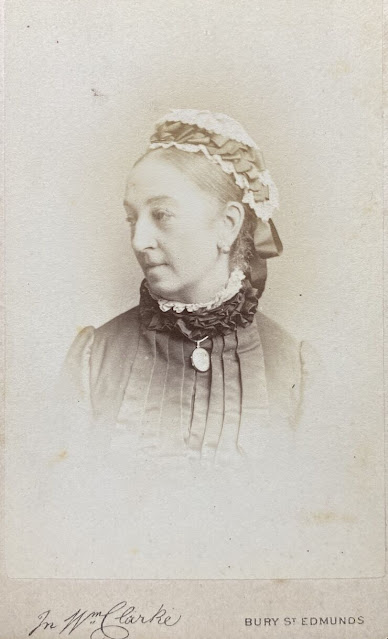 ...We have a Lizzie (Mrs Girling), photographed in Berlin .. 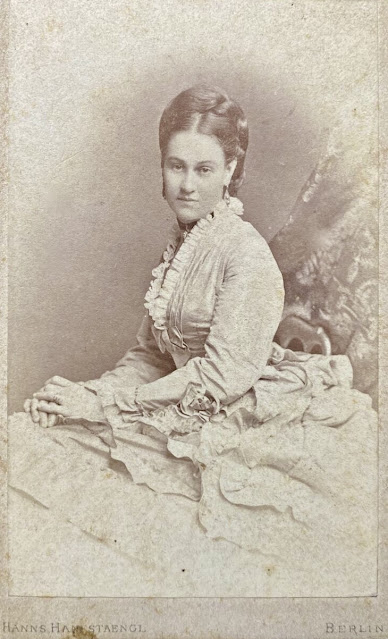 Can't place those two yet.

Then we have Charles Matthew and Frederick William .. 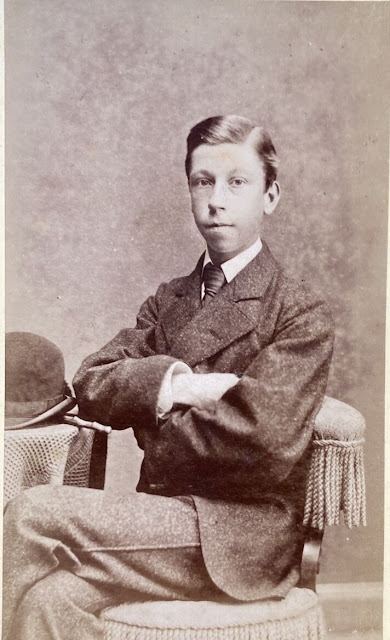 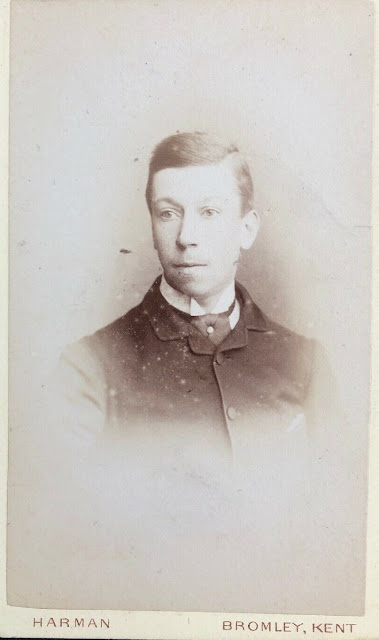 Evidently brothers, though one was photographed in Göttingen and the other in Bromley. Its the cousins. Son number two's sons ...  children of Joseph Matthew Holworthy (b The Hague 16 April 1822; d Bromley, Kent 21 December 1894) and his wife Jemima O'Brien Jones from Jamaica (m 16 December 1852)  (d Bromley 27 December 1911), who settled in Kent.

I see Mrs Fred (Sarah Lalla née Hawkes) giving birth to a son 28 May 1885, at St Kilda, where Fred is referred to as 'of Elworth, Bromley, Kent and late of Dunedin, NZ'. Sarah Lalla died in Dunedin in 1948 (5 August). Could she be our Sarah photographed in Bury St Edmunds? Her son from Australia, Frederick William Richard, 'archivist of rne English Speaking Union, London', 'county council record keeper' died in Kent in 1961.

And Lizzie? I have no idea. Of William's seven daughters only two, Alice and Amy Rose, married, and only Amy (Mts Charles Ledward) had children ... of his five sons, one died young, one went missing, one never married, Charles is credited with a dubious daughter and only Herbert (son Herbert Desborough) seems to have had a child. So where does 'Lizzie' fit in?  But who knows,? this lovely photo shows us that Florence was known as 'Polly' ... 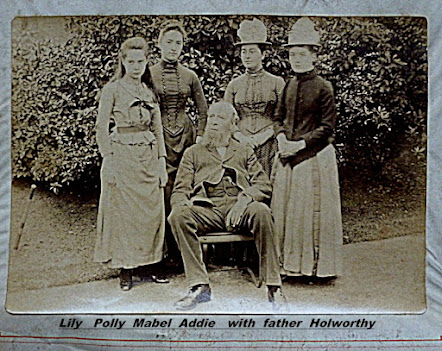 There's heaps more family history in this one, but enough. Let's just hope these photos find their way back to what remnants of the Holworthy and Ledward families are still around  ...