I'm not in the mood for my proper work this morning. It's hot and muggy and a mosquito with gluteal tastes somehow got into my bed during the night and had a meal.  So I itch. Well, I've got litre of fine, cold milk, and I'm going to spend the morning on the e-bay game.  Some nice ones today. And I picked this one ... 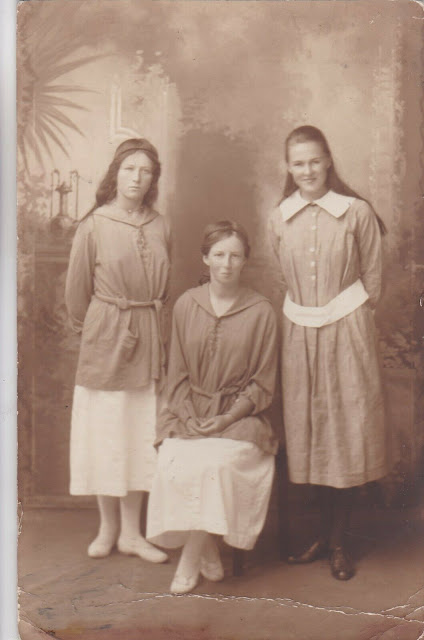 Outside my period -- it's clearly 20th century -- outside my area -- it's from Oak Bay, Victoria, Canada and -- maybe outside the realms of possibility. Two of the girls are named (the third is 'myself') and their surname is ... guess! ... SMITH.

Well, I couldn't do much about 'myself' (right) who looks delightful, but I got the other two. Yes, they were the sisters Smith.

I think it must have been mother who had the passion for multiple names (and even a hyphen on occasion), because father was the son of a simple John Smith, lately of Demerara, British Guiana. Father was born there, Colin Simson Smith, on a date in 1854 which may have been 12 December, or may not have been. He seems to be in two places at once in the 1901 census with different dates of birth. Colin was sent 'home' to Edinburgh to be educated, and emerged as a civil engineering student, working at the Burntisland Docks and later in London. I lose him for a bit there: he may have been civilly engineering somewhere in the Empire, but in 1893, he moved to Kelowna, British Columbia. By 1901, he is listed as a 'plantation manager'. Back home, he was still registered as a voter in Edinburgh, and he certainly visited for, in 1900 he married an Irish lady by name Louise Beatrice Pim at St George's.

Miss Pim (b Monkstown 14 April 1868; d 1 Carlton Mansions, Hampstead 28 July 1926) was from a prominent Quaker family, a good deal in view in public and financial affairs .. Thomas Pin Esq of Monkstown House ... Thomas Pim the railways speculator ... and, at 32, it was time that she was wed. Colin Smith was 46. Anyway, they scooted off back to Canada after the wedding and there, before the end of the year, Vaila was born. Later, her birthdate would be given as 1901, but there was a census in early 1901 and there are Mr and Mrs Smith with 3-months old Vaila, born December 1900. Maybe a touch too soon?

So Colin farmed his fruit, Louise brought up her daughters until ... did something happen? All four of them are together in 1911 ... but then they appears to be living apart .. in 1921, Colin is living alone at Okanagan ... and mother and two daughters can be seen travelling frequently between England and Canada, until mother died in 1926 at her home in Brondesbury ..
Colin lived to a fine old age, dying, aged 87, on 22 June 1941 at Kelowna.

After Mamma's death, Monica married (1 June 1933) the Reverend Leslie Francis Edward Wilkinson (b Madras 1 November 1904; d Barnet 13 December 1960). There was no issue, and Monica lived her last twenty years alone. For Vaila was also gone. Something must have happened, for in the 1939 quasi-census she can he seen in Napsbury Hospital 'patient, incapacitated'. Yet two years previously she had still been crossing the Atlantic ..  She died at St Alban's in 1950 ...
Oh, Mamma left a will, to be executed by her brother, the Rt Hon Jonathan Ernest Pim, who had risen to high rank and parliamentary honours. It won't have taken much of his time. She left less than 300 pounds.
Posted by GEROLSTEIN at 10:05 PM