Cartesians of the day: Letter B &c

.
Knit one, purl two ... nope, can't do that anymore with my stroke-struck hand, so here we go with another dip into Davd Stone's marvellous G&S archive ... Letter B. Not sure why, except I wandered there during my "L"s ...

Let's start with someone who was't in the chorus

The tenor known as Percy Blandford spent half a dozen years as a Victorian vocalist before settling down to real life.

Percy Weston was born into gentry stock, the son of banker and Surrey magistrate Henry Weston and his second wife Emily (née Burgess). He began his working life as a clerk in an insurance office, but a stout tenor voice led to his partaking of music, and in 1876 the Carl Rosa Opera Company announced a ‘new tenor’, Mr Blandford.


It proved to be more fanfare than fact: Percy doesn’t seem to have sung in the company’s season at the Lyceum, but when the Rosa ‘B’ team gave Don Giovanni at the Alexandra Palace, he was cast as Don Ottavio alongside Frank Celli, Aynsley Cook, Cora Stuart, Giulia Warwick and Miss Thornton. Maybe there were other performances, but this is the only one I have found.

Through 1877 and into 1878, he appeared in concert at venues such as the Alexandra Palace (‘Adelaide’, ‘Sweethearts’, ‘Up With the flag’), the Brighton Pavilion, the Schubert Society, the Royal Aquarium etc, and made an appearance as an actor, first in the operetta Queen of Hearts at Brighton, and then, in July 1878, in a charity performance of Trial by Jury, alongside Haidée Crofton, Federici and Charles Kelleher.

He sang in Rivière’s proms at Covent Garden (‘he has much to acquire in point of style’) of 1878, performing the Stabat Materwith Madame Lemmens-Sherrington, and the following year, billed as ‘of the Covent Garden concerts’, took to the stage as the latest genteel tenor of D’Oyly Carte’s company, briefly playing Ralph Rackstraw in HMS Pinafore on the road.

He sang at Margate in the season, staged a concert of his own with Auguste van Biene in July (‘My Queen’, Watson’s ‘The Hidden Casket’) and took another brief turn at Ralph Rackstraw in the ‘rebel’ production of HMS Pinafore at the Imperial Theatre.

In 1880, he surfaced at the Albert Hall singing Elijah in the company of Anna Williams, Antoinette Sterling and Henschel, but most of his scattered concert engagements were more modest, society or semi-professional affairs. Each year, for three years, he staged his own concert (‘Sound an alarm’, ‘Ingemisco’, ‘Cantique pour Noel’, ‘Awake thou golden beam of morn’, ‘Ah si ben mio’), and, in 1882, he took a little concert tour with Carlotta Patti. His voice was now described as ‘robust and rich’, his figure ‘manly’ and he seems to have been a pleasant performer.

In 1882-3 he set off for Italy for a few weeks and the press reported his appearances in concert, but it was a last hurrah. He gave one final concert – with Patey, Sims Reeves, Elly Warnots et al – displaying his new-found skills in the arias of Verdi, a few weeks later he was seen at a do for the English Church in Rome, and then Percy Blandford metamorphosed back into P B Weston. And the tenorising insurance clerk into a ‘mining expert’.

And thus he remained. At the age of 63, P B Weston wed Katharine Mary Allen, twenty years his junior, and he lived to the age of 80.

Another who was not in the chorus has defeated me. I can't see why anyone would choose to be known as Edith BROAD if it were not wished on her at birth, but it seems to have been a stage name. Miss Broad spent the years 1890-1897 in the Carte companies, so I'm sure she is lurking somewhere in Wigan in the 1891 census. I shall return there. Anyway, post-Carte she had a small part in the tour of The Gay Grisette, played in pantomime at Newcastle ('I cannot live without him'), toured as La Favorita in Morell and Mouillot's The Circus Girl (1899), and then, in 1900, hooked up with ex-Carte tenor Llewellyn Cadwaladr. The pair purveyed Offenbachian pieces -- A Millionaire for a minute, In the Stew which was undoubtedly La Rose d'Auvergne -- and 'society entertainments' to the music halls until 1905. I wondered if, perhaps, they were more than just duet partners, but in the 1901 census Cadwaladr, boarding in a house of theatricals, is staunchly single, and 'Edith' is nowhere to be seen.
ADDENDUM: Months later, I got her. And the name was indeed wished on her. Edith Hannah BROAD (b Brighton x 29 August 1872; d Acton February 1939), was a daughter of Thomas Peter Broad, musician, and his wife Hannah née Dunt. The reason I couldn't find her in the censi is that she was a teenage bride, and, yes, it was another D'Oyly Carte marriage which collapsed. So she is there in Wigan as Mrs Edith Holdich, with her husband Arthur Beacham HOLDICH (b Bordesley, Warwicks 24 January 1864; d 29 Tavistock Square 11 June 1924), better known as Arthur HATHERTON. Hatherton had quite a career, so I'll leave him till another time. Anyway, he soon gave up trying to be a husband, and by 1901 she is back home with her widowed mother. Sister Earley May Broad is labelled 'actress'. Arthur didn't try marriage again, and Edith died 1939 as Mrs Holdich.
I didn't hold out much hope of finding Pauline Briscoe (b Bordeaux, France c1860) anywhere but in the 1881 Leeds census, but I thought Mr W Brenham might be better. Well, I found him in 1874 singing tenor with the Court Minstrels, and in concert with Gompetz's Band in Sheffield before going on tour with Gompertz's Tour from London show, narrated by no less than the young Edwin Keene. In 1876, he is with Tute's Minstrels, and in 1877 he advertises from Wolverhampton for a job as primo tenore. His repertoire, he claims, includes Faust, Manrico, Thaddeus, Lubin, Fritz ... Well, in 1879 he got to sing Faust, but not the opera. He went on tour with Fred Smith's Phantasmoscope showing a Faust fantasy. Later that year, he joined May Bulmer's Company at the Garrick Theatre, playing A Cruise to China/Vokin's Vengeance and La Fille de Madame Angot/The Two Gregories, after which he joined the Carte chorus. The archive tells us he stayed there till at least 1889. So he should show up in London's 1881 census ... but he doesn't. Misspelling or stage name.
Not so unproductive was William Orange Billington. He was born in 1849, at Newlay near Leeds. He married Carte chorine Sophie Farquharson (1844-1916) in 1881. They must have stayed together a while, because they had a daughter, Margaret Alice (b 18 August 1885), who became a music-hall performer. Sophie says in the 1911 census that she is 'married' rather than a widow, so I guess the Orange is around somewhere. But he didn't go back to being a 'traveller out of employ' as he had been in the 1881 census. He went on a hugely full and varied career as an comic actor/singer. In 1885 he was a member of the so-called Royal English Opera Company (with Edward Griffin and Michael Dwyer), in 1890 he is singing a song in a piece called The Miser's Will, in 1892 he is an actor as Jonathan Jubb in The Prime Minister, 1893 Rev Benjamin Barrable in A Lucky Dog alongside Bella Cuthbert, then a long tour with 1,000 Pounds Reward, and and even longer one with The Swiss Express (Doctor Gull, 1895-6-7). In 1898, he played Stephen Francis (alongside Harry Tebbutt) in In the Days of the Siege/The Puritan Girl, in 1899 a Boucicault season at Bath and For a Child's Sake, and -- blow me down! -- as late as 1909 as Sir Joseph Verity in a tour of A Country Girl, 1910-1-2-3 as Joey Wright in The Passing of the Third Floor Back on both sides of the Atlantic, Inspector Flanelly-Jones in Robina in Search of a Husband, The Dynasts at London's Kingsway Theatre (1914), Weedon Grossmith's The Night of the Party, Monsieur Duprez in Wild Thyme, Daniel Jakes in The Silver King in 1917. Nearly forty years on the stage. He died in 1928 at Guildford ...
Oh dear, I see a suggestion on the www that he was brother to Fred Billington. No. William was the son of William Billington ('stuff dyer and finisher') and Margaret née Orange and his elder brother was christened 'Osborn'. See the family in 1861 at Bramley. Tut.

Arthur Richardson BOIELLE is strangely difficult to find. Not the basic. He was born in Jersey, son of Rennes-educated French literature professor (and later author), James Boielle and his wife Jane Mary or Jeanne Marie Richardson. At some stage, the family abandoned the Island for Dulwich, and it is there that we first spot young Arthur, in 1896, playing Sir Roderick in Ruddigore alongside sister Marie (b 31 July 1872; d 17 November 1953) (Mad Margaret) with the local amateurs.
Of his career, I can find only a little trace, although I am sure that in the past I have spotted his name in a few cast lists. We have confirmation of The Emerald Isle (1901, chorus), The Princess of Kensington (1903, Sir James Jellicoe), followed in the same year by Little Hans Andersen (The Court Physician) and in 1905 by The Talk of the Town (Cyril Slipp and takeover Colonel Sir Charles Nightingale). The role of Slipp was taken over by chorister 'G Boielle' (so says that impeccable volume The British Musical Theatre) which could be Arthur's younger brother, William Hadden (ie Guillaume) Boielle (b 16 March 1880; d 1954).
That's the basic. I expected more. But Arthur's life went into a bit of a tailspin, so maybe that was the end. He had married in 1900 a lady named Annie Eva Tubby and in 1902 they had a daughter, Nance Richardson Boielle (b 27 August 1902; d 12 December 1978). In 1904, a son followed, but he died as an infant. In 1913 a second daughter also died as a baby. By now, Arthur had renounced the theatre and was operating as a tobacconist and hairdresser in Erith. And then his wife got the wanderlust. They were divorced in 1916 and Annie married her paramour. As for Arthur ... well, in the 1939 census I see his three unmarried sisters (who were gilders and carvers in the 1911 census) running a tea-shoppe in Rye. But I don't see Arthur. As I don't see him in the censi 1881, 1891 and1901. Well, I guess 'Boielle' was a bit beyond those dummies who did the censi. His death registration is clearer. Arthur died at Battle in 1949.
PS Got him. 1901 Arthur Boülle, vocalist, with wife at 6-7 Saville Street, Marylebone ....   1881 Arthur Borelle with parents, two brothers and two sisters at 'Sandringham', Camden Underhills Road ... 'scholar' ... 1891 Arthur Rovelle 'banker's clerk' (so that's what he did!) at the same address.

Well, a bit curate's eggy, the Letter B. But, like that egg, good in parts.

While searching for these good folk, I strayed into Letter P. Sadly, not P for extremely productive.

Catherine Pelling turns up in the Wigan 1891 census, lodging with Mary Roney, where she tells us that she is 30 and comes from Maidstone, Kent. Where she must have been born under another name.

Joseph Knight Pearce (1839-1907) came from Stroud and he was another who had a day job whilst singing in the Savoy chorus by night. Pearce was a jeweller for more than forty years. I see in the 1901 census that his daughters were named Nina, Louisa and ... Casilda.  His father was banker's clerk Lot Pearce, his mother Elizabeth Knight, his wife Martha Maria Hughes, he had four sons and three daughters into whom I shall not go, as the family historians have done that, in the year 1870. One brother, three sisters. 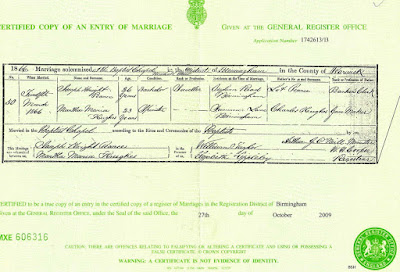 Maybe I'll go for a stroll through Wigan. My brother used to live there. But not in 1891.
Posted by GEROLSTEIN at 10:01 PM