Belval: the bassest of basses


.
Usually, when I take on one of my vocalists for a careful study, I find that the ins and outs and events of his or her career have been, in some way and degree, distorted by encyclopaedists, footnotists and their ilk, and need quite a bit of straightening out. But when I light on someone like the bass known as Belval, who spent twenty years of his life in music performing in one and the same theatre, there is, naturally, not a whole lot of searching and straightening out to do. Most of the facts are easily findable, and the brief biographical bits of writing to be found, concerning him, usually stick to, at least, a selection of them. However ... 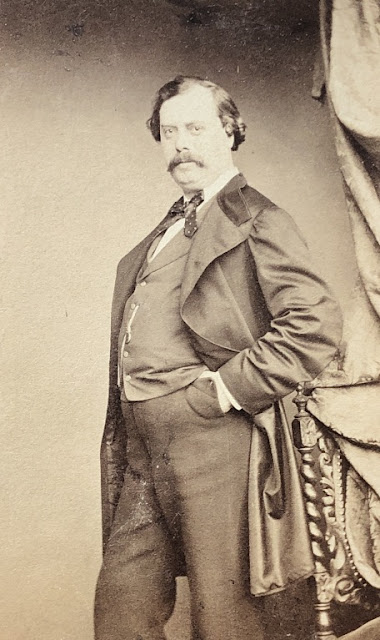 'Belval' was a nom de théâtre. That's absolutely no secret ... just about every latter day comment on our man (copied, of course, one from another from another) refers to 'Belval, real name Jules Gaffiot'. Well, [Jules] Bernard Gaffiot. He was the son of Claude François Gaffiot of the Royal Artillery, Douai, and his wife Sophie Julie Constance Rue, and his birth was registered at La Fère, Aisne 2 June 1819. So says the website 'geneanet'. Heylli's dictionary of pseudonyms says his father was named René, and says that he took for stage name the surname of his wife. Since the latter statement (unless he had two wives) is pretty surely incorrect, I prefer to trust in geneanet and its precision. I suppose one could confirm, either way, by checking the lists of Chevaliers of the Légion d'Honneur, for, like all good soldiers, father was one such. His brothers, too. But Bernard went on the stage.

Now things get a little 'flou'. One potted biog says 'He started his vocal studies in 1843 at the Conservatoire National in Paris. In 1846 he made his debut at the Opera of Antwerp'. Not so. The newspapers of provincial France stand witness. In April 1843, M Bernard Belval can already be seen singing as principal bass, not in Belgium, but at Bordeaux. Bordeaux, where thirty years earlier a Madame Belval had been the theatre's star. Thence the choice of stage name?

But a jolly little piece in a volume entitled Le Nouvel Opéra, published when Bernard was an established star, says (a) he studied at the Conservatoire (b) he went on the stage at Antwerp in 1846 (c) for that occasion he took his wife's maiden name as his, so as not to embarras the family soldiers. Hmm. I say: (a) if he studied at the Conservatoire he went unnoticed. And the Conservatoire pupils were, at that time, eagerly discussed in the music press. So I beg to doubt it until proven (b) Antwerp was not his first job, and (c) the wife? Well, the only one I know of is Jeanne Sophie Montignac. She mothered his son, Edmond, in 1850 (Paris), his daughter Marie in 1853 (Ghent), a Pauline and a Jules Emile sometime, somewhere, and he got round to marrying her in 1862. She called herself Mériadec de Montignac at one stage, and was registered as Jeanne Sophie Belval Gaffiot at her death at Le Plessis-Robinson 20 November 1884. Was there an earlier 'Madame Belval'? I'd guess 'no', but ... Anyhow 'Madame Belval' was at the side of 'Belval' in January 1844 when they were both engaged at Antwerp, and in 1846-7 at Rouen when she is already 'Mme Bernard-Belval' 1ere duègne', so I presume that's the same lady who is '1ere duègne et dugazon mère' with him at Lyon in 1853-5 ... But better than that I cannot do. I don't know, but I guess...

So what does Le Nouvel Opéra (and, therefore, Kutsch and Riemens, OUP et many al copied therefrom) say next? 'Après Anvers, il va a Toulouse .. Lyon. Il y reste 4 ans ... La Haye, the Brussels Monnaie and Gand ...  Hummmm. Here is my version, based on newspaper reviews I have dug up:

I am sure he sang at those other Belgian and Dutch houses, but I haven't yet found what or when.

And then the Paris Opéra called. 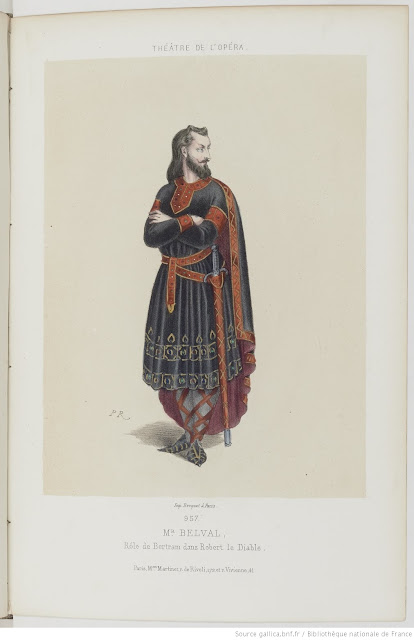 I'm not going to follow his 20-year career at the Opéra chronologically. Suffice it to say that, after a debut in Les Huguenots (7 September 1855), through those 20 years he played his staple roles -- Marcel in Les Huguenots, Bertram in Robert le diable, Brogni in La Juive, Zacharias in Le Prophète (while it lasted in the repertoire), Walter in Guillaume Tell, Balthasar in La Favorita -- over and over and over. He also took part in a number of the new operas produced, of which L'Africaine (28 April 1865, Don Pedro) and Hamlet (9 March 1868, King Claudius) succeeded in establishing themselves in the repertoire. 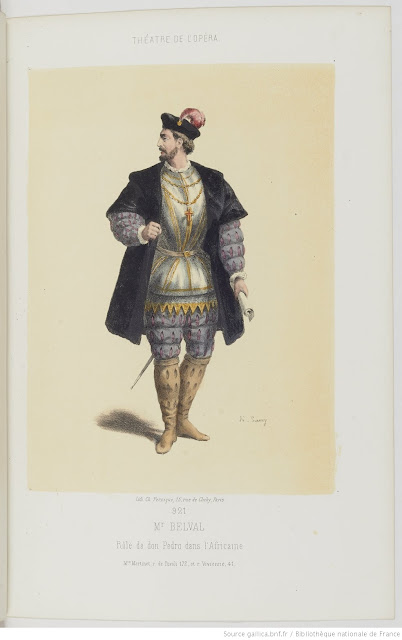 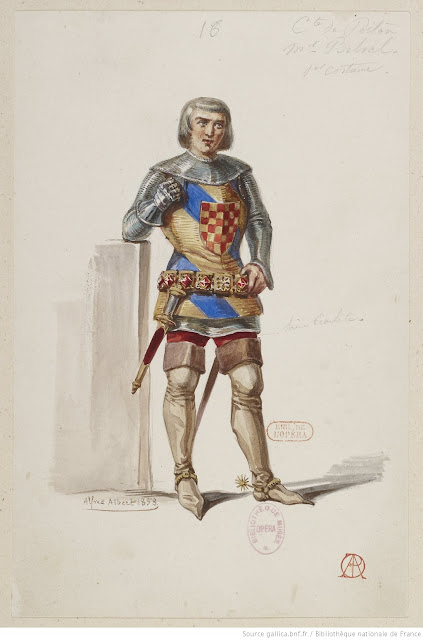 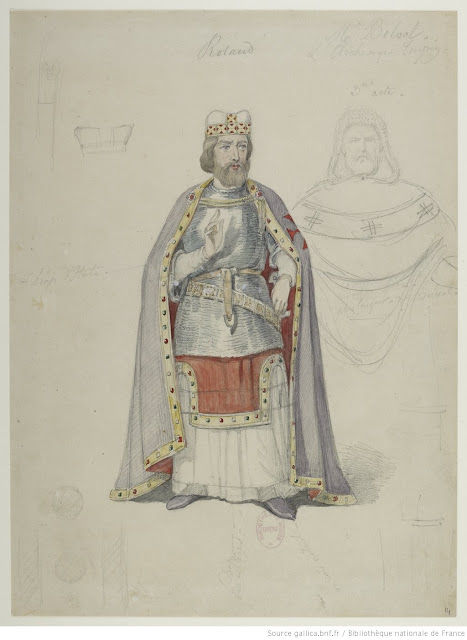 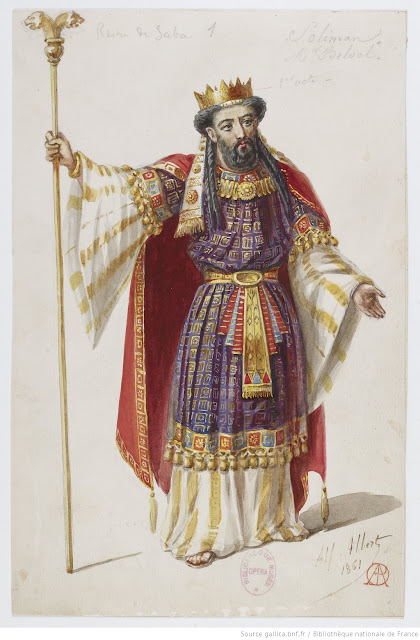 It was, however, a role that he refused to create which got him into court and trouble. The role in question was that of the Inquisitor in Don Carlos. Belval counted the bars ('seventy lines!) instead of listening to them, found the amount didn't constitute his idea of a 'premiere basse' role, and refused point blank to play it. The press took sides vehemently, colleagues backed him up ... and in the end he didn't play what would have been one of his most impressive new roles. 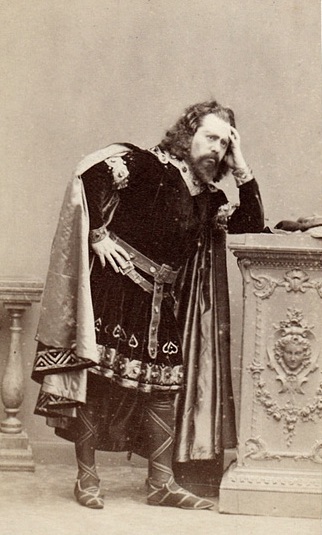 During his years at the Opéra, Belval also sang at other venues and in concerts. I spot him in his old haunt of Douai in 1859 ('une des plus belles voix que nous ayons jamais entendu', back at the Lyon Grand Théâtre giving a few performances of Huguenots and Robert le diable, at Lille (1862) with Miolan-Carvahlo giving those two pieces again, plus Jérusalem, Norma and La Favorita, and in 1871 he made a brief incursion into London (3 June 1871) for a much-liked production of Robert le diable with Titiens, di Murska and Nicolini.

He also seems to have interested himself in the running of the Opéra, and in 1879, when Halanzier's period as director of the house was coming to an end, he presented himself as a candidate for the succession. Auguste Vaucorbeil got the job. 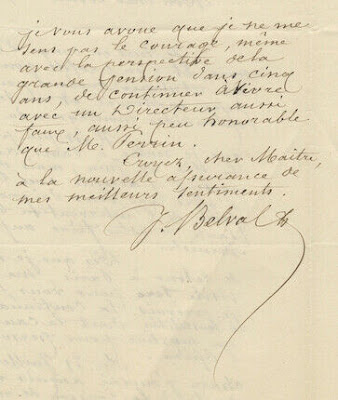 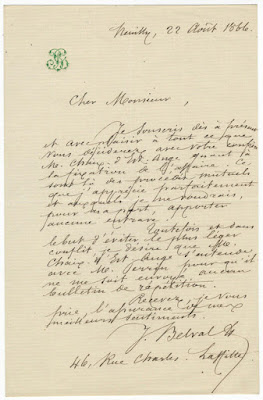 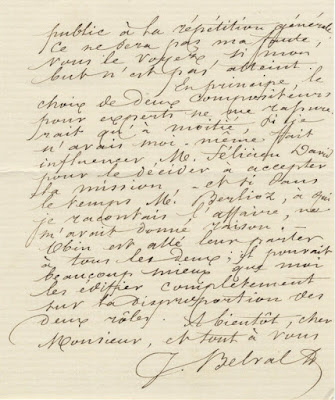 After leaving the Opéra, with one last Les Huguenots, Belval visited Madrid and Barcelona where he appeared in his favourite role alongside the tenor Stagno. It seems to have been his last hurrah. His voice, at the approach of sixty, was losing its fabled power and plunge. He spent the last two years of his life in retirement, before his death at his Paris home, Rue Chalgrin 4 September 1879, following a fit of apoplexy.

Two of Belval's children followed him into the theatre. Son Paul became an actor in a career which included roles in opérettes such as L'Enlèvement de la Tolédad, La Dot de Brigitte and Mam'zelle Carabin before he took to directing. Daughter 'Marie Belval' had a fair career as an operatic soprano in Paris before moving with her husband or 'husband', conductor Auguste Vianesi (there had been other Mrs Vianesi's including a Billingsgate chorine, Maria Henderson), to America. She is said to have died in New Orleans, but she is buried in Brooklyn's Greenwood Cemetery (February 1901). 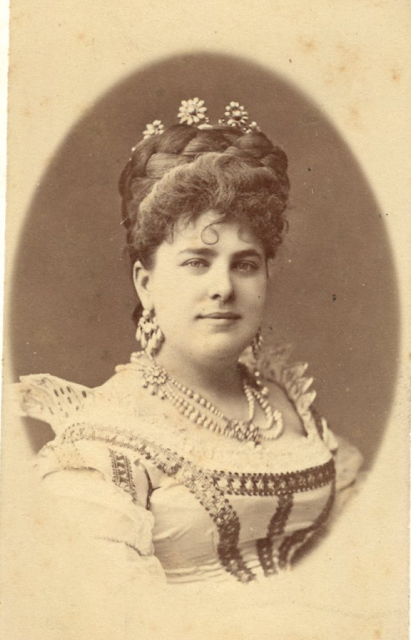 Posted by GEROLSTEIN at 8:42 PM