.
Another rainy day dawns. Wendy was up before dawn, lit the fire, fed the kitties, and is out cleaning paddocks, I crept from my 12-hour slumber (is it the citalopram re-boost, or simply old age) at 9.30 and have tardily got to my time machine for todays venture into C19th D'Oylyland.  I had intended to get into 'Iago Lewys', but there was a message from David Stone saying 'how about sorting out all the Webb girls'. He only ever chucks me the hard ones. Geraldine St Maur, pah!

Anyway, I peeked at Lillie-Lily-Lillian. She's going to be a mission. Then Dolly ka Dorothy. Yes, there she is in Bury, with the company, in 1901. Aged 28. With three other company members: Lina K Carr, Lucie Caine and Lily Matthews. So I thought, while I'm there .. 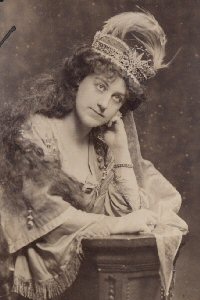 David had already sussed that Lina was Michaelangela Katrine Carr from Southsea, born 15 July 1872. And he details her fine career as a leading soprano. I shall just tidy her up. She was the daughter of a naval captain, George Lyon Carr (1824-1890) and his wife Marie-Thérèse Quartano, sister to another naval commander ...   She quickly sloughed her unwieldy first name in favour of 'Lina', and in May 1892 appeared on the amateur stage at Portsmouth as Josephine in HMS Pinafore as such. Apparently she had already been seen as Mabel. She sang in concert with another sprig of the services, Frank Barrington Foote, at Southsea ('A Summer Night', 'Goodbye'), played Rose Maybud with the Portsmouth and Southsea Amateur Operatic (guest: Llewellyn Cadwaladr, with whom she appeared also in concerts), and in 1893-4, whilst giving the Easter Prayer from Cavalleria Rusticana in concert, played Elsie Maynard and Aline with the Operatic. Sidney Tower was the Alexis. Later in the year she appeared as Margery Sylvester in the comedy Our Flat. But she was not long for the amateur ranks: in 1895 she joined the Carte organisation as the leading lady she had always been, and such she remained up to and even beyond her marriage (details in g&s archive).
Her marriage, in 1899, was to Allan Frederic Everett - yes, the same Everett who was to go on to become Admiral Sir Everett (b Warminster 22 February 1868; d 22 January 1938). Making Lina, eventually, Lady Everett. After her retirement from the Carte, after some seven years service, she returned to Portsmouth and again played with the amateur group where she had begun.
Lady Everett died at the age of 59, after an operation, in August 1931. 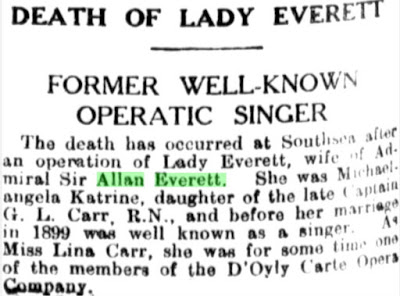 Lucie Caine was a little more complex. Because she wasn't born 'Caine'. But I found her in the end. She was born in the Barton Regis district in the third quarter of 1878, the second daughter of Edward Lawrence (commercial clerk) and his wife Mary Ann Harriet née Pocock, and was christened Lucy Gertrude Amy Lawrence. After four children, Mr Lawrence died, and Mrs Lawrence and the children moved to Prittlewell, Essex where, in the 1891 census mother is calling herself 'Lillian L[awrence] Caine. She wasn't. Yet. But in 1898 she did finally marry Charles Cain, a bootmaker from Margate, so, give or take the 'e', I suppose Lucy was in the right to call herself Lucy Caine.
Her career seems to have started in 1896 when she toured in the title-role of Austen Fryer's The New Barmaid company and played principal girl, Rosamond, in the Richmond panto Babes in the Wood, before joining up with the Carte organsiation. Her time there lasted from 1897 to 1901 (see g&s archive),  after which she joined up with the Gaiety touring company playing The Toreador in the Marie Studholme role of Dora Selby (1902-3), and took over from Zena Dare in the title-role of An English Daisy. In 1903 she played in the panto Santa Claus jr at Newcastle, alongside J J Dallas, Horace Mills and Fanny Dango, in 1905 she featured in the Manchester Gaiety's Sleeping Beauty, in 1906 she is touring with a trope known as 'The Dandies', and in 1908 she moved into the West End, supporting Ada Reeve and Hayden Coffin in the musical comedy Butterflies (Lalage). I see her little thereafter, though she turns up in 1915 playing in Florodora with Evie Greene on the road. 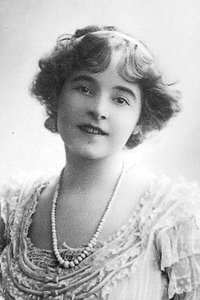 Of her further life I know nothing. It doesn't help not knowing what she called herself... Lawrence, Cain, Caine ...  so, for now, I leave Miss Lucy Lawrence on the road in Dundee ... I notice that elder sister [Charlotte] Ethel [Beatrice] Lawrence ka Caine died in 1959.

Where has the rest vanished to!?
Hopefully I can get back the missing section, dealing with
(a) Lucie Caine's family and my failure to find her death
(b) Lily Matthews, which contains nothing beyond her Carte career and a rude comment about censi and landladies
(c) A few extra non-Carte engagements for Dolly Webb, but no identification
(d) Lillie/Lily Webb [WEBB, Lilian Caroline] and her husband Frank Benwell Holt (m Glasgow 20 March 1888). Merely the information that she bore him two daughters, Gladys and Lilian, pre-1901, and that circa 1905 he emigrated to Capetown. Also that he was originally a student at the RAM.

Posted by GEROLSTEIN at 2:37 PM