A century and a half ago: Not your usual amdram pic.


I lit upon this photo this morning. It was labelled simply as 'amateur theatricals', or something of the sort ... 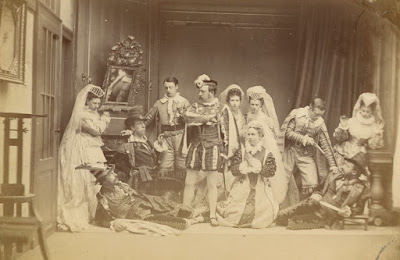 It looked a bit classy for an amdram photo. Those costumes?  There was no date on it. Nor any indication of what the show might have been. But someone had inked in the names of the 'actors' on the mount, and a few of those made my eyes prick up.

Yes, these are amateur theatricals. Round about 1870, or a couple of years later, is my calculation. But they are not your Puddlesby-on-the-Marsh players on parade. This is a bunch of the fairly wealthy and the more-or-less aristocratic playing at actors. I would say, maybe, at a country house weekend. Or maybe in the lavish rooms of number 4 Albert Gate, Knightsbridge.

It's fairly clear who are the leading lights in this little group. The chappie in the middle, and the lady kneeling next to him. His wife. He is Tom Naylor Leyland (referred to as Lieutenant or later Colonel, thanks to a brief spell, in his 20s, in the 2nd Life Guards) (b 1841; d Garve, Scotland 24 August 1886) his wife is Mary Ann, née Scarisbrick (b 30 December 1841; d 15 Prince's Gate 15 June 1902). His wealth came from his father, landowner Thomas Leyland, from Northwich, Cheshire; she was the daughter of Charles Scarisbrick of Scarisbrick and Wrightington, whose antecedents et al you can exhume from Burke.  Baronets all over the place. In 1871 Mrs Leyland threw a ball at their home in Dover Street, Piccadilly: the guests list (duly reported in the press) was enormous and topped by a lump of aristocracy. In the 1881 census the Leylands are living at Albert Gate. The establishment has thirteen servants, which says it all ... Their country seat was Nantclwyd Hall in Denbighshire.

The chappie with the pointy hat, on the left, is John Talbot Searle (b London14 May 1837; d London 1921). He was at Mrs L's ball at Dover Street. In the census he describes himself, from his eternal-bachelor lodgings in Mount Street, as 'grandson of a peer'. His mother was Lady Harriet Talbot of the Earl of Shrewsbury's family. Once again, I refer you to Burke. He doesn't seem to have done much in his life other than go to balls, where, as a single man, related to a peer, he would doubtless have been a mamma's darling. But he clearly had other ideas. (PS Talbots come into the Scarisbrick family, so maybe he was a distant relation).

The man kneeling next to him is not a peer. He's a plain merchant. But a very rich one. And he hobnobbed with the Duke of St Albans and the like. His name was [Frederick] Leo Schuster (b Bradford 10 March 1839; d Cheltenham 19 February 1902), and I see that in the 1871 census he and his wife Sophie née Wood had a mere five servants. When his father died, in 1884, he left an enormous fortune (187,000L) which Leo managed to reduce by 80 percent.

The next, young, fellow, is Alfred Joseph Gandolfi Hornyold (b 7 October 1850; d Biarritz 26 April 1922). He was a descendant of a certain Marchese Gandolfi who makes the Burke-ish books, but who I have not been inspired to look into further. Minor nobility? He doesn't seem to have had a day job either. But he acquired a French wife (Marie Louise Genevieve Alice de la Chère) and two children ... In 1891, he is living in Richmond Hill 'on his own means' and the servant count is negligible...

The other ladies, alas, elude me. There was a 'Miss Gilbert Smith' (left) of some small social pretensions who came from the Isle of Wight ... Mrs ?Forster and Mrs ?Stadler, shoved into the back row, mean nothing to me ... and Miss Carlyle, doing some acting, on the right ... well, there were too many of those.

The chap lying down on the right is 'Frank Russell'. Too many of those, too. I'd like to think it was the social Captain Frank Russell but .. which leaves just 'Mr Easton', with the gun. Nope.

So there we are. One hundred and fifty year-old amdrammers ... of just a little more curious interest than usual ..

PS When I went back to ebay to have a second look, this was gone. But, happy end, one of my friends, having read this wee piece, had snapped it up ...