.
Many years ago, my old and aged friend, Trafford Whitelock, was going through the traditional move down from 'house' into 'room'. As we do, and as I am now doing, he emptied the shelves, cartons, drawers holding the ephemera of his life in showbusiness, and consigned them to the rubbish bin. I salvaged a box of music -- printed and manuscript -- mostly by Australian songwriters, that had been sent to him in his BBC days, evidently in the hope that he would find for them a spot on a radio programme. Well, you know ...

Years later, came my turn to auto-divest. My gigantic British Musical Theatre collection was sold to a Benefactor of Harvard University, various bundles of stuff were gifted to folk who longed for them, other things were abandoned on the way, as I moved from England to France to New Zealand ... but somehow Traffy's songsheets survived on my shelves. They made it to the second-to-last major 'cut'.

No. I didn't burn them. I donated them. Which is, in some cases, and with some instituitions, is almost worse. I have a feeling that this case was one. A decade or more ago, the Music Section of the New Zealand National Library was in the hands of a widely knowledgeable and very nice chappie named Roger Flury. We got to know each other socially, a little, workwise a lot, and I bemoaned the sad decline of National Library. I told him the story of how it had refused my archive (the one which is now in Harvard) because it had 'no Maori content'. Well, it was round that time when Maori was becoming 'fashionable' and PC, and every frantically-liberal, middle-class hostess of either sex had to possess a few phrases to throw, languidly, into his or her conversation. Roger exploded. If I had anything Aus-NZ I wanted to donate to HIS department, it would be accepted gratefully.

So Traffy's music went, with my bound volume of Lyster Opera Company libretti and I forget what else of Australasian interest or origin, to the NZNL, after all. Lord knows where it is now. Roger is gone. The Music department probably too. And my next major bundle of give-away goodies, as a result, headed not to Wellington, but, this month, to Santa Barbara. America has a less insular and less racist view of history. Even unimportant old music and theatre history.

But ... today I found one of Traffy's bits that somehow fell through the throw-out net ... Here it is, with its attached (with a rusty paperclip) note. 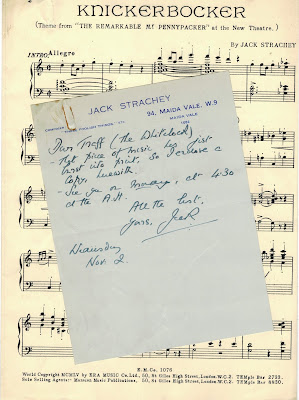 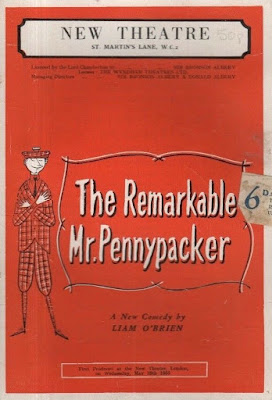 Jack would have been rather 'out of fashion' by then .. which is probably why he was printing and touting his music himself, to old mates ... but he'd had a good career .. 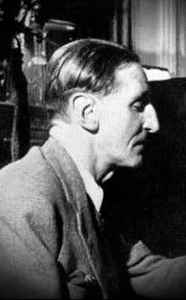 STRACHEY, Jack [STRACHEY, John Francis] (b London, 25 September 1894; d Brighton, 27 May 1972). Composer for a handful of the dancing musicals of the London 1920s.
An education at Marlborough and Oxford University led Jack Strachey to an early career as a pianist in seaside concert parties before he won his first London credits as the composer of revue material for such shows as The Punch Bowl, Charlot's Revue and The Nine O'Clock Revue. He entered the musical theatre in the early days of the craze for dance-and-comedy shows, sharing the musical credit on Laddie Cliff's early musicals Dear Little Billie and Lady Luck and then, along with H B Hedley, Stanley Lupino et al under the pretendedly American umbrella-name of `Hal Brody', on the highly successful So This is Love and Love Lies.
He continued to write principally material for revue (Shake Your Feet, The Bow Wows, Charlot's Masquerade, The Chelsea Follies, The Savoy Follies, Spread it Abroad, All Wave, Moonshine, Swinging the Gate, Apple Sauce, New Ambassadors Revue, Sky High, Sweet and Low, Flying Colours, The Boltons Revue, Pay the Piper etc) and had his most notable single song hit with ‘These Foolish Things’.
Two decades after his last West End dance-and-laughter musical, Strachey returned to the musical stage with a rather different type of score for the costume operetta Belinda Fair (131 performances) which, although not disgraced, did not find the same success as those light-footed shows of the 1920s.

At this stage in the story, an unexpected limo glid down our drive. I put this article on hold, and went to investigate. It was Richard, NZ's top theatre musical director, bringing a keyboard or two for the use of our next house guest, who has a musical to compose over the month of January. We chatted over a nice cup of tea and  I told him about the piece I was writing today ... and showed him the music. I cannot 'read' music, by eye, and I can no longer play, with my four remaining operative fingers, so I had no idea whether the piece was of quality or just a bit of twiddling...

Richard has gone home with the music-sheet and its accompanying letter. He says it is 'interesting', 'of quality' and 'worth saving'. Chuckle, maybe it will turn up in a 1940s-50s play one day. Again.

Happy ending! Now, that leaves only a few thousand items to re-home ..

Posted by GEROLSTEIN at 5:08 PM