Mr Grundy, or a playwright's life is not an easy one ...

.
The tidy-classify-chuck-and burn routine goes on ....

Where, and how, did I accumulate all this stuff, in the 1970s and 1980s, with my very limited resources and an almost inexistant wage-packet ...

I suppose that a lot of it simply wasn't wanted ... or more likely, understood ..

Here's today's little find. A letter written by Sydney Grundy (1848-1914), the highly successful English adaptor of such French pieces as Les Petits Oiseaux (as A Pair of Spectacles) and La Femme de glace (as Esther Sandraz), as well as Meilhac and Millaud's book to the succesful musical comedy La Cosaque. Well, you can look him up.

In April 1887 Grundy adapted another, and thooughly successful, French play, by the brilliant team of Henri Meilhac and Ludovic Halévy. La Petite Marquise had been produced at the Théâtre des Variétés starring Jose Dupuis and Céline Chaumont and the comedian Baron, 13 February 1874, and acclaimed as a 'petit chef d'oeuvre'. It ran, played yound and round the French-speaking world, was revived, revived again, and Mr Grundy decided to English it. With the assistance of Mr Joseph Mackay. 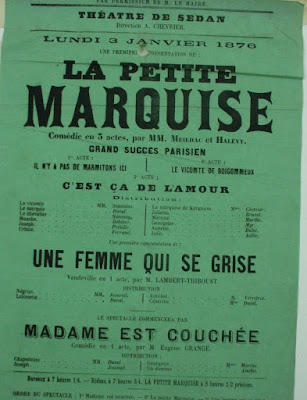 But lo! the British censor, in spite of the fact that nobody in the play actually beds anyone, found the little story far too Feelthy French for the virtuous middle British classes (the upper classes simply popped over to Paris) and refused to license The Novel Reader. So Mr Grundy (1882) staged what pretended to be a private matinée for his friends, with Claude Marius in the star role, and some slight alterations. At the curtain, little Lydia Cowell, who had played the leading lady's role, stepped forward and asked the assemblage 'Do you consider it so very awful?'. She was greeted with cheers. 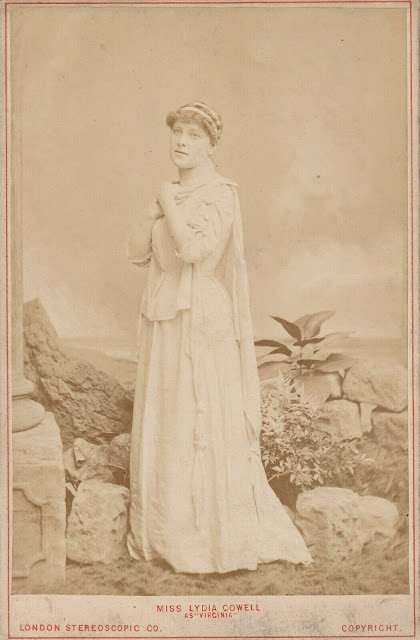 This 'performance of an unlicensed play', however, was not calculated to please authority, and, while Grundy moved on to other successes, and in spite of the war of words that followed, The Novel Reader was not produced in London. Not in English, anyway. French play seasons were popular and regular, and  La Petite Marquise duly made its way to London's Royalty Theatre in 1886, with Noblet and Mlle Magnier featured. And ... the censor forbade it! Journalistic ink flowed like the sillons that abreuve with sang ..  The Era, England's best (but buyable) theatre paper, devoted a whole editorial to the event (6 February 1886) ... 'a filthy play'.

But Grundy did not give up. He fiddled with his text a little more, changed the title to May and December, and tried again. On 25 April 1887, the new version was given at a matinee at Gilbert Farquhar's Criterion Theatre. And this is where our letter comes in. The press credited Mr Farquhar as 'producer'. The matinee was paid for by the authors. At the cost of a whacking 95 pounds sterling. 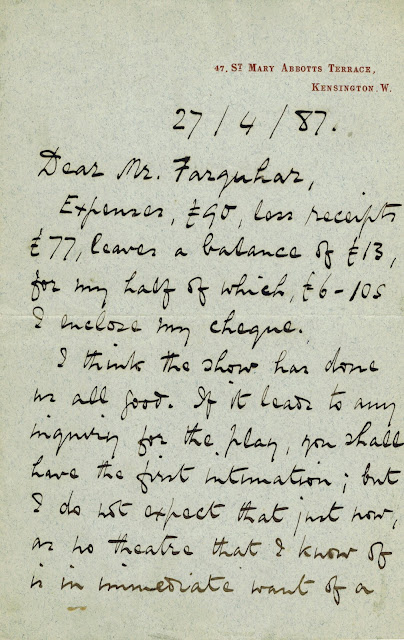 The Prince of Wales came to the show, and the reviews found nothing to object to. Mr Pigot could hardly accuse the royal family of being perverted by the feelthy French .. so ...

The Era recanted, asserting that the 'objectionable feautres' had been removed, and all made conventionally good-is-rewarded and evil-punished (about the most boring tenent in dramatic history!). Other reviews were more perspicacious ...

And the 'well-attended' matinee, royalty or not, made a loss of fifteen percent on its capitalisation... 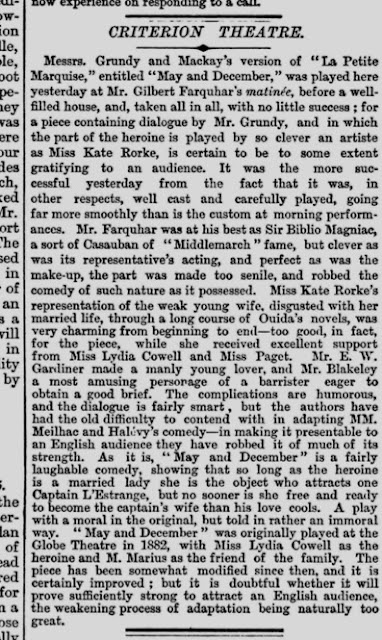 May and December (the title shows the reorientation of the original story) was finally given a London run, sixteen years after its acclaimed Paris premiere, in 1890 at the Comedy Theatre, with Rose Norreys as the now thoroughly conventional heroine. It was too little, too late, too bowdlerised, too Britishly boring ...

Grundy went on the write the libretto for Arthur Sullivan's vaguely comic and wholly un-French opera Haddon Hall ... had he installed a little of the spirit of La Petite Marquise and The Novel Reader therein, they might have had a wow of a hit ... a playwright's life is not an easy one! But there were more hits to come for this adept playwright ...

So, there we are. My letter is, I would say, a nice piece of documentation for anybody writing one of those things called a thesis, on the subject of theatrical censorship in the C19th theatre.

Pour another glass, Kurt. Put the 130 year-old letter back in its slip-case till someone shows interest in it. And see what's next in the folio...

About two metres from my left elbow is an original playscript of La Petite Marquise. I'm sure I read it forty years ago, but I didn't connect it to my letter. But I've promised myself Beethoven Nine this evening. And some of our old harness-racing wins on ancient video and those old things called CDs ...

Posted by GEROLSTEIN at 7:22 PM

I own the cabinet card of Lydia Cowell shown in this entry!