.
My study/library is starting to look nicely bare. If the folk who say they want certain things, and then don't come for them, or send postage, would do so .. it would be even better. But I'm getting there ...

However, sometimes I find little bits among the stacks that ... well, yes, I've decided that I can throw them away. Because I'll put them on here, and then I don't need pages of yellowing paper, in thrice-used folders ...

The folder that I investigates, today, originally held father's papers on the Federated Mountain Clubs of New Zealand. In the 1990s, after his death, it got recycled ... well, a folder cost $1, and in those days we weren't into throwing away a dollar's worth. And today, probably for the first time this century, I opened it ... and at the top of the stuff inside was this 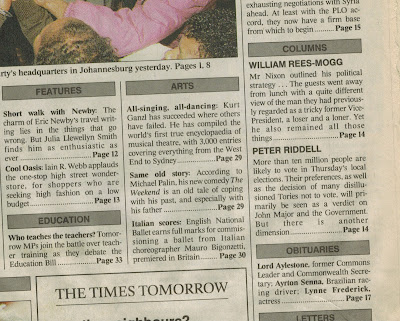 2 May 1994. I share a rubrique with Ayrton Senna, Dusty Springfield, Lord Monty de Beaulieu, Michael Palin ... I giggled as I realised I probably got the best write-up of any of us (well, you don't count post-mortem eulogies) and, so, I posted this picture on facebook ...

I liked the sub-editor's blurb 'succeeded where others have failed' (I hope Wikipedia caught that!). It was perfectly true, but youngish, unknownish writers don't usually get allowed such an accolade, especially in The Times ...

Well, of course, the next item in the file was nothing else but page 29. And the article on my book filled half a page. Even Senna only got a quarter of a page. And the dreaded Churchill is reduced to a bulldog thumbnail!  Half a page of The Times is too big to fit my scanner, so I photographed it and hope it is lisible... 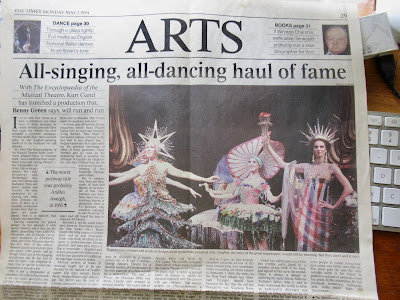 When you write a large book, on a subject so large that no one has ever taken the time to research it coherently and properly (from primary sources), you are ripe for the slings and arrows of those self-appointed 'experts' on the subject, or parts of the subject, who have been 'going to write that book', for decades, but ... well, somehow didn't and couldn't. I was lucky. I had the most knowledgeable of the genuinely knowledgeable of these fellows, Andrew Lamb, on my team, soon followed by Sheridan Morley. Poor, dear Mander and Mitchison were a bit piqued ... but, what!

This review was by Benny Green. Anyone old enough to remember the later 20th century in London theatre will remember Benny Green. He was the guy who radio or TV dragged out, mostly, when there was something musical-theatreish to be commented on. He'd tried his hand at the odd show himself. He didn't pretend to be an expert, but until Sheridan and A J Lerner hoisted their historical flags (and we wont even mention that hysterical fake, Mark Steyn) it was mostly Benny. I think we may have met once, but my memory is not great these days. Anyway, he it was that The Times, not unreasonably, selected to review me and mine.

Well, good one you, Benny. It's a thoroughly sensible write-up. Yes, its peppered with a thick dose of the little semi-fictional anecdotes that you loved to tell, and with the errors you helped perpetuate (Clifford Grey never went near a bobsled, it was a homonym; Edgar Smith was NOT HB's brother, you spelled Deslys wrongly ..) but, well, I've straightened them out, and you're dead .... .  I do have a quibble with the Times picture editor: why illustrate a piece on the history of the musical theatre, which specifically excludes flops, with a vast snap from a (deservedly) egregious failure which was NOT one of the 300 illustrations in the book? Did they know, perhaps, that I had cast that flop. Which is another story that I will tell, one day ...

Oh look, the next one is a piece by Clive Hirschorn, another of the more enthusiastic musical-theatre men of the time ...

Chuckle. Some nice quotes to be culled from there. I like 'massive hit'. But, er, Clive, I never could dance. And I don't think we ever met. Shame.

'But all that', to quote a musical, the name of which I now forget, 'was a very long time ago'. In the days of real journalism in the arts ...

Strangely, it wasn't, actually, my heyday. Although I became, with my 'beautiful voice', for a while, very BBC-able. Stories to tell there, as well.

As Benny suggested I should, in 2001, I brought out a 3-volumed, hugely improved, beautifully produced version of the Encyclopaedia, from the enormously author-friendly Schirmer (USA) ... but alas, the third edition didn't happen. My lovely, friendly, respectful, easy-to-work-with publishers (hello! Richard Carlin!) were taken over by a multi-national giant which, now, doesn't even respond to my letters. I contacted not a person (blocked) but their - believe it! -- Australian website last year. I am still waiting for a reply. Oh, and for several years of royalties. So. Do I go solo, reclaim the copyright to the text, and go elsewhere for the 21st century edition .... or do I just give up. I mean, copyright in the text ...?  I hear my voice and see my texts (complete with typos) on websites from Shenzen to South Dakota. Even on wikipedia, whose sub-authors are often too coy to admit that they've filched my work holus-bolus. That's fine by me. At least, if they pinch from me, they are getting it correct!!!!!!

Which brings me to another thought. A couple of years ago, I brought out another Big Book. Victorian Vocalists. 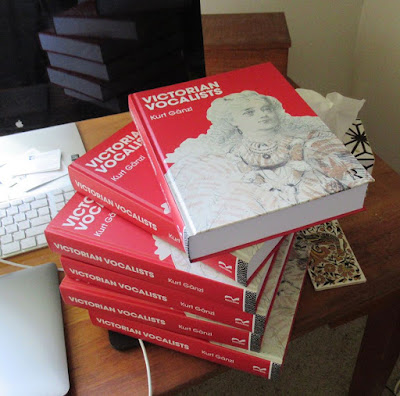 It was published by Taylor and Francis, who had signally failed, by vast overpricing, bad merchandising, and general incomptence to sell a series (edited by yours truly) of biographies by England's, America's and Australasia's best musical-theatre scholars. Like those books, this one got not one single review .. much less half a page in The Times. No, not even one of those, oh-too-frequent modern 'reviews' by some nonentity who clearly has not read the book. Nothing.

I get the feeling the failure is not mine. The publishing and journalistic world, simply, have changed. I am in no way intending to be vain (look at my waistline!), but having been labelled as the world's Numero Uno, wouldn't you expect that I would be asked to review new works in the field? Nope. Hardly ever. Last year .. um ... thrice. But out of those three, I found a gem! Bravo Mirambeau!

Well, cocktail time. Put Dad's file back on the shelf ... ah! that's what it is! It's my (late) proud parents' folder. They saved all these clippings, just as they saved the ephemera of my school and teenage music triumphs and every letter I wrote home once I left New Zealand in 1968. I don't dare get into those ...

Posted by GEROLSTEIN at 8:57 PM