.
I stumbled on this, earlier in the week .. 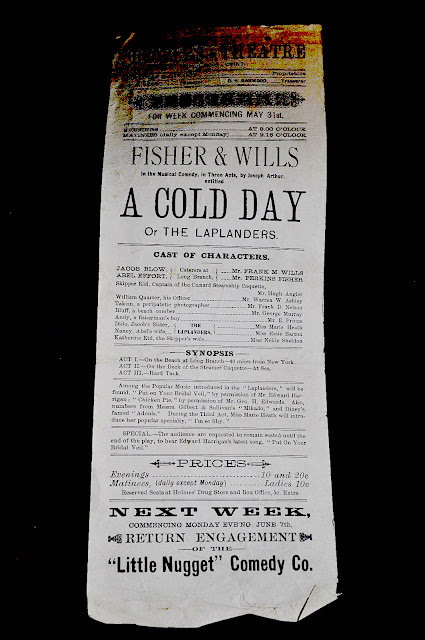 It's a programme for the Theatre in Toledo, Ohio for the last week of May 1886. A quick glance down the names involved showed very few that rang a bell. If you don't count The Mikado, Adonis, Ned Harrigan et al whose works were plundered for what passed as a score for the entertainment. Just .. yes, surely .. Joseph Arthur, credited with being the author of the piece, is surely the same fellow who later wrote the hilarious melodrama Blue Jeans ... you know the one: 'and the buzz saw crept ever closer, and ..' (end of reel).

I haven't delved very deeply into the folk involved in this semi-legitimate form of 'musical comedy' entertainment, except when tracking the career of Australo-Canadian Willie B Gill -- the author of Adonis -- for my biography of said Willie in the Forgotten Stars series 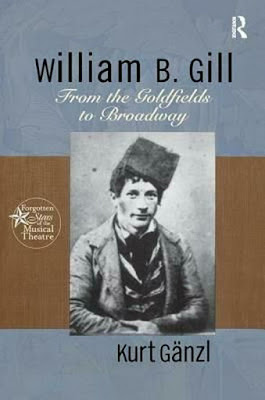 so I thought, lets dig a little into this unfamilar portion of musical theatre history. Three days later: Oh, good heavens, what a muddle ... I will not be digging there again.  What a hotch-potch of tuppeny-ha'penny entertainments passed for coherent shows in nineteenth century America. Incoherent they were, consisting of movable parts of chat (little or no plot), borrowed songs, fall-about, Dutch, Irish and Nigger Minstrel comedy played by an often quickly changing cast ... nothing but a variety bill (nothing so structured as a Minstrel Show!) ...

Let us look at A Cold Day. The programme from Toledo is from year two of the title's peregrinations. You can see that the artists involved had snaffled numbers from The Mikado, Adonis, The Leather Patch and May Loftus's repertoire, for the musical part of the show. This particular week. But when A Cold Day had started it would have been different. Each artiste simply did his or her turn. And in between .. there weren't even dancing girls to bring on. But an entertainment bearing the name A Cold Day, or The Laplanders, in its various shapes and forms, would wander round America for something like a decade in shrunken versions ..

So. The title. It seems to have had something to do with a politician or advertising. Theatrically, it made its first appearance in lateish 1884, when provincial minstrel, comic and song-and-dance man Frank Girard (b Brooklyn 7 July 1840; d 1 November 1900), whose claim to fame was having been saved from a shipwreck, advertised that he was to tour, with Frank Wills and Charles Burke, a piece under that title written by Charles Gayler (d Brooklyn 28 May 1892), one of the better current writers of the sort of entertainments, farce-comedies, musical-comedy-melodramas which flooded American theatres. Around the same time, Mr Girard also announced that he and Burke were going to tour a piece called Two Old Cronies by F G Maeder. Then their backer (probably at the thought of what he hat himself in for) died. So Two Old Cronies was off. I see it finally came out a few years down the track (2 September 1887, played by the Wills family!)
.
Then A Cold Day was announced again, but this time Gayler's name was not mentioned. When it went on the road on what seems to have been 5 January 1885 at Williamsburg, the credit (?) for its authorship was given to 'Mr Joseph Arthur'. It was apparently not the same Cold Day credited to Gayler. Mr Arthur had had a piece called A Plot - a Play briefyl produced at the Third Avenue Theatre, to hand, and in need of a title ($1000 reward), so the Third Avenue play snitched the previously announced title, and away they went .. 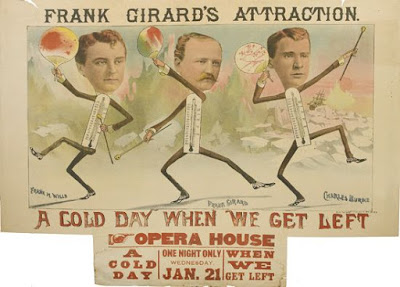 Mr Arthur. He was Mr Arthur H Smith (b c 1849; d 20 February 1905) from Indiana. Father had been a methodist preacher until he gave up preaching to become and agent for an Insurance Company, elder brother George was a store clerk, 'Joseph' worked as a conductor on the railways. However, he had stagestruck notions, and in his early twenties he begn working in any branch of the theatre that would have him. He penned a piece entitled Colorado played by Fayette Welch, he joined the Hicks Georgia Minstrels, he advertised as 'author and songwriter', promoted himself as a female impersonator (Widow Coldslaw in Our Eating House) in which capacity he joined up, in 1878, with Frank Wills to play a sketch in which he was Brother Tom in Petticoats. At some stage, he claimed to have sung comic opera in Britain, voyaged to India and the East, got divorced, penned The Nightmare, played in a forepiece with Willie Edouin's company at London's Avenue Theatre ... and then came A Cold Day. But he finally hit paydirt when his melodramas The Still Alarm and the oh-so-burlesqueable Blue Jeans proved to the taste of a certain 'popular' public. But that was not yet. Arthur actually made it to the pages of Gerald Bordman's American Theatre ... although Gerry didn't pick up that A Play - a Plot was the same 'comic musical conglomerie' as A Cold Day. .. so I guess that firms up his place in American theatre history.

Next: the 'play' or 'conglomerie'. Gerry says that the original was about 'a comic photographer who snaps a picture of a passing trolley, just as the trolley is jolted to a halt, throwing some young girls into the laps of strange gentlemen'. Well, there IS a photographer in the dramatis personae, so maybe that was the very skinny original skeleton of the show. Oh! Graunccccch! subtitle 'The Laplanders'. Anyhow, the show was 'reconstructed' after a few months, and a review affirmed 'there is no plot -- it is unnecessary. It is written to make you laugh.' Others confirmed 'the singing and specialities made it a success', 'many new and taking specialities were introduced'.

Apart from Girard and Burke (another of the minstrelling-comico brethren) and Frank M Wills (ditto) -- Burke and Wills together - an alarming teaming for Australians! -- I don't know exactly who was in the original cast of either A Play or A Cold Day. Richard Norton's encyclopaedic work blanks the show, undoubtedly with reason, and I have found no other playbill or clue till, after visits to Boston and Easton Pa,  when the show stopped as 14th Street Theatre, NYC, 26th January, for its one week of imprimatur. The three girls are listed as being played by Hattie Arnold, a solid comic opera soprano, the well-known Fanny Wentworth and a Lizzie Hight. It is also recorded that the 'play' lasted 2 1/2 hours. And look, here is an ambitious ad from the trades, following New York! Miss Wentworth gone, already, to be replaced by the durable soubrette, Gracie Emmet and her ?brother with their speciality 'The Emmet Guards'.. 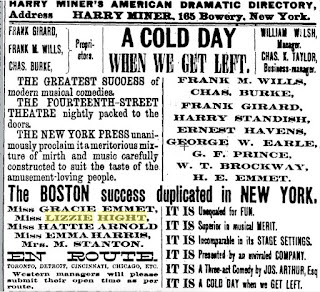 By April, Girard and Burke had jumped ship, all sorts of other speshs had taken longer or shorter turns in the 'cast', the management had changed ... but the piece, in some sort of shape (and with a seemingly reduced cast) rumbled on ...

Wills seems to have lasted the longest at the head of affairs, but, by 1886, he had been joined by one Mr Perkins D Fisher (b Smyrna, Delaware, c 1860?; d 12 September 1930). Mr Fisher, son of a German immigrant, had started with grand ideas in te theatre. As an amateur he gave New York his Othello. But he went on to appear in the Boston musical Sancho Pedro, and then he and his nice bartione voice found themselves a starring role in farce-comedy. Mr Fisher had a fine, long, career in minstrelsy and variety's soft middle-belly, latterly in an act with this wife.

The rest of the cast in our playbill (except for Mr Hugh Angler and E Fisher, whom I know not at all) were solid touring players, and included two married couples: Warren W Ashley from Dickson, Ill, and soubrette Marie Heath, of Gatesburg, Knox; and Frank D Nelson from Erie and vocalist Essie Barton, who was starring in minor comic operas into the 20th century.  I suppose Nellie Sheldon was the wife of the better-known A H Sheldon. George Murray 'the noisy Dutchman' seems to have alternated between Germanica and blackface.

The week at Toledo played 'to crowded houses', the 'recostruction' seems to have pleased, and the reduced cast (9-10), travelling in a railways car, where they all slept and ate and whatever together, covered America, leaving little in the way of memories behind them, but making a reasonably honest (I doubt they paid any royalties!) living ...

Life in the musical theatre wasn't all Les Cloches de Corneville and Erminie ...

PS Specialists in this field, if there are any, please send me any corrections or improvement that may be needed ... I'm hastening back to an area where I am more at home ...!

Posted by GEROLSTEIN at 7:51 PM