.
After all the grand events of early December, yesterday the month went sour with a vengeance.

Wendy stepped in a rabbit hole or tyre track, fell, and broke her ankle. She is now wearing a surgical moon-boot, and our lives are turned upside down ...

Then Hoppy, the one-legged peacock vanished. He's nowhere to be found, and we fear the worst. (Post scriptum: after 2 1/2 days of absence, he turned up tonight!)

And then I found a mistake in my 3-volume ENCYCLOPAEDIA OF THE MUSICAL THEATRE.

I have been very proud of the fact that, over the 18 years since the publication of those volumes, only a handful of errors have subsequently been found (by me). One was a foolish one: see LITTLER. A couple were deliberate lies by living people. Fred EBB, or was it KANDER? The one who's dead. Lied to me about his birth. Then Monty Nosevitch (ka NORMAN) refused to tell me his real name. I got it under my own steam, but too late for the book. But today ...

CLARE KUMMER. American. Lied hugely about her age, and I fell for it. Well, not wholly. I put a question mark beside the year. 1888. FIFTEEN years chopped off.

Today I found this playbill on ebay: 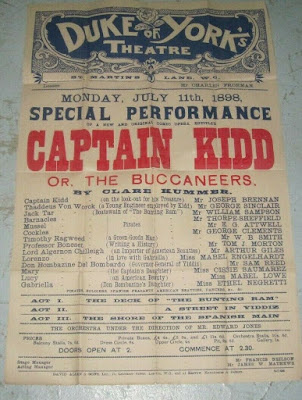 The cast? There are only a handful of names that I recognised without searching. Cissie Saumarez (with whom I have dealt in my Gondoliers blog), having finished in The American Belle, was was surely touring for Morell and Mouillot in The Transit of Venus around this time; Ethel Negretti (née Rosenstreich) was a chorus girl who, here, got to be ingenue, before scoring the Marie Halton role in Wallace Erskine's tour of The Shop Girl. She played good roles in touring musicals and returned to the West End as a singer in The Sign of the Cross, and as Fairy Queen in the 1903 Drury Lane panto. I suspect 'Mabel Lowe' may be the subsequently postcarded-to-death Mabel Love, recently seen in The Yashmak at the Shaftesbury. Thorpe Sheffield (né Wilson) was a minor member of the Carte companies for several years; E G Attwell had toured in The Maid of Athens the previous year; Joseph Brennan had been supporting William Gillette in Secret Service at the Adelphi and Too Much Johnson at the Garrick, and Annie Russel in Sue. I see that W B Smith, Sam Reed and William Sampson also played in Sue ... it had only opening a few days before this matinee, so I fear parts may have been hurriedly conned.

I notice, however, that they ran to an orchestra with Edward Jones as conductor. But the director, Liverpudlian actor Neilson, was another small part player from the Gillette company. He'd recently tried his hand at a musical comedy A Highway Knight, adapted from the German, in collusion with Hedmondt and Winckworth of the operatic world. He was engaged as Charles Frohman's stage manager, so I guess this little affair was, in some way, connected with Frohman.

And I imagine this little piece of paper is the only record around today of its ever having existed.

Posted by GEROLSTEIN at 2:45 PM