Who's the Hughes? Sorting out a theatrical dynasty.

.
There's nothing I like better on a sunny seaside day, than to sit ... with the doors and windows wide open ... watching the Australian birds dancing round my bird-table, sipping a glass of iced sparkling ... water till 5pm, then wine ... and delving in to some past history, some theatrical mystery ... deciphering an old playbill, a photo or, best of all, a piece of music.

Today it was a piece of music. I stared at the cover blankly. Composer: John Barnett; Words W T Moncrieff, of high reputation both ... sung by Mrs H Hughes in Monsieur Mallet at the Adelphi Theatre. Who? What? Never heard of them. Clearly, a little bit out of my 'period of expertise', but still ... 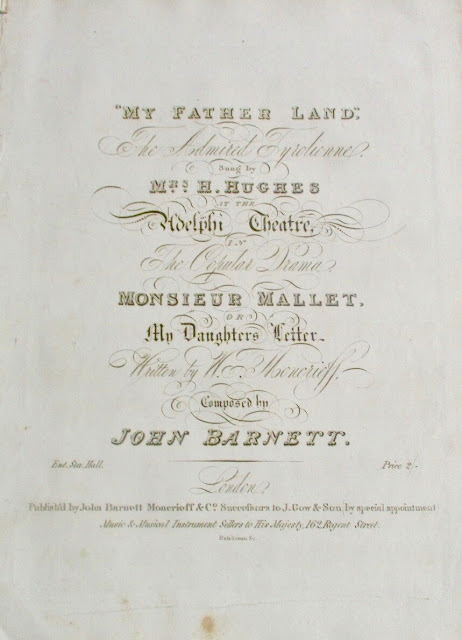 Well, it was easy enough to find out about the 'popular drama'. For it was, indeed, popular. The character of Monsieur Mallet had been invented by Charles Mathews as part of his one-man show. It was an a-typically sentimental little characterisation -- an old Frenchman, expatriated to America, waiting, pathetically anxious, for 'My Daughter's Letter' -- and some of the critics couldn't cope with Mathews being anything else but funny. But it was decided to make a three-act play out of the little sketch, and Mathews's portrayal was surrounded by a vast number of comical characters, plot complexities and other decorations, including songs, by Moncrieff.

The Adelphi Theatre mounted the play with a strong cast, centred, of course, on Mathews, but featuring T P Cooke, J B Buckstone and, in the role of the daughter, the established leading lady, Elizabeth Yates (ex-Miss Brunton). The plot included an episode in which Mdlle Mallet and her young man get confused with a lass called Keziah van Gunnery and her young man, who are attempting to elope ..  the part of Keziah, with a song, was taken by Mrs H Hughes. 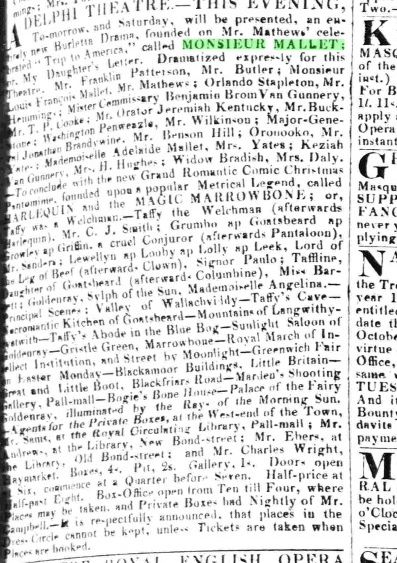 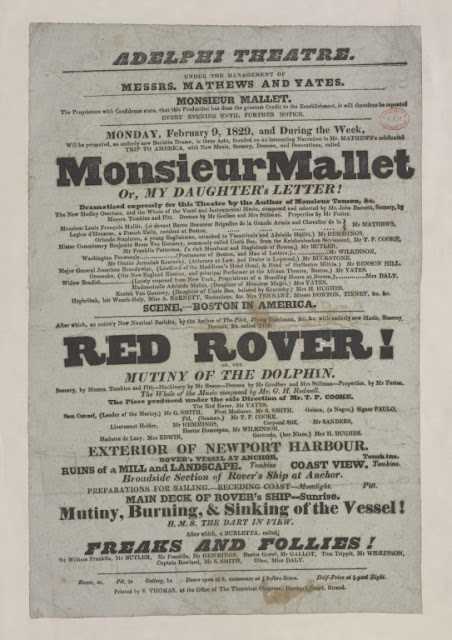 It looked as if it ought to be easy. There were lots of Hugheses around in the theatre, but surely not 'H Hughes'es. And Mrs!  Wrong. After a day spent wandering in the theatrical past, I can tell you that there were, in fact three Mrs H Hugheses. Which is just as well, because I found a Mrs H H working at Exeter in the first decade of the nineteenth century, and -- it had to be another! -- another at the Surrey Theatre in the 1840s in juvenile roles. Well, it surely couldn't be the latter at the Adelphi from 1822. And if it were the lady from Exeter, she'd be a seriously ageing ingenue!

The answer was straightforward. When I found it. Our lady was, indeed, a third Mrs H H. And, thanks to the Exeter connection, I sorted it out. Sophia, Mary Jane, and Frances ... all Mrs H Hughes.

I knew of the connection of the name Hughes with theatrical Exeter. Actor Richard Hughes (d 20 December 1814) had been many years the proprietor of the Exeter Theatre, as well as those at Plymouth and Weymouth, and, indeed, sometime of Sadler's Wells. 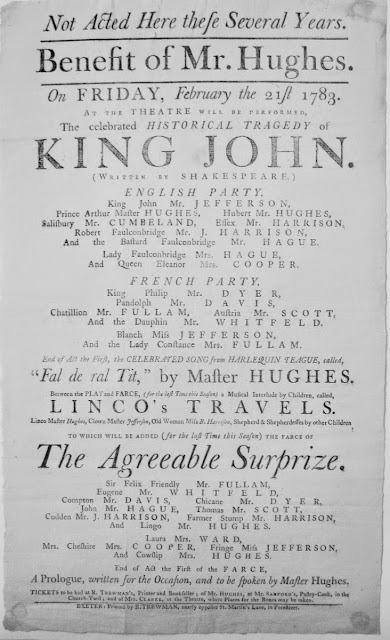 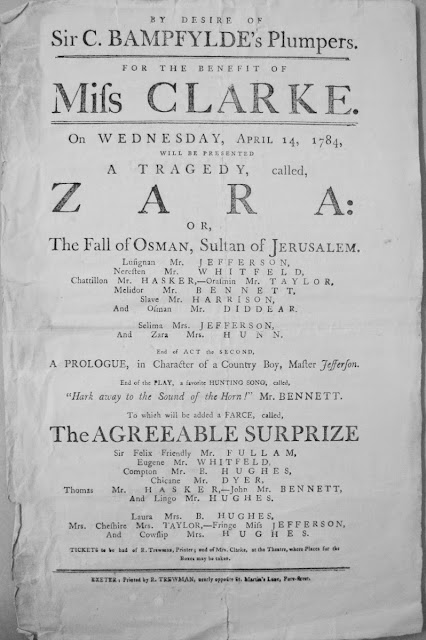 So there we have Richard and his wife, née Lucy Williams, and a Mr and Mrs B Hughes who are clearly some kind of relation. Probable the Benjamin Hughes and Polly Basset Harrison married in Stoke Damerel in 1782. And Master Hughes, who I imagine is eldest son, Richard, who was born in 1772. Anyway, lots of Hugheses and I guess they all feature in any history of theatrical life in Exeter.

Well, Richard and Lucy had two sons, and two daughters. Daughter Julia married Mr John Stokes Bennett (see above), and youngest child, Henry (b Stoke Damerel 8 October 1784), followed the family tradition and went on the stage, in Exeter. Henry. Mr H. We're getting there. Thanks to a nice gossipy memoir by an old actress, I discovered that Henry married the actress Miss Wentworth 'of Covent Garden'. Actually, it was Drury Lane, and she was there between 1801-1804, but never mind. She appeared at Weymouth thereafter, and ended up as a very popular personality in Exeter. Sophia Child Wentworth married Henry Hughes in Guernsey 8 November 1806, and bore him five children in eight years, before succumbing to a bout of jaundice in 1814. 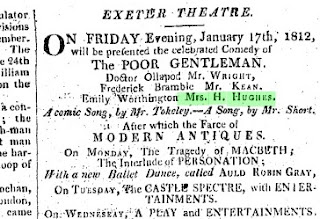 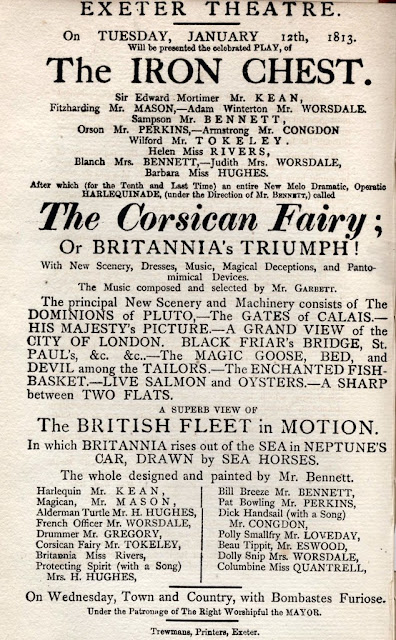 Our Mr and Mrs H and I imagine the 'Miss Hughes' is Julia ...

So exit Mrs H (Sophia), and shortly after (12 August 1817), Henry remarried. His second wife was another actress, Miss Mary Jane Edgecumbe, and it is she, indeed, who is our Mrs H H of the Adelphi. I haven't found Mary Jane working as Miss Edgecumbe, but from 1817 she can be seen, at Exeter, as plain Mrs Hughes, in the title-role of Aladdin, as Zelinda in The Slave, as Mrs Grub in Husbands and Wives ... Henry had now join with Bennett as the theatre's manager, and in 1821 they built and opened a new theatre. The following year, Mary Jane was engaged for the Theatre Royal, Drury Lane, where she made an immediate success as Sophia in The Road to Ruin. On the musical front, she was cast as Cherubino to the Susanna of Miss Stephens and the Countess of Mrs Austin, alongside Elliston, Liston, Harley ... Covent Garden responded with a production featuring the celebrated Paton/Tree combination. She remained three seasons at Drury Lane, before, in September 1826, moving to the Adelphi, where she created the role of the heroine in the hit play The Pilot, played Lucy in The Flying Dutchman, Jenny in Luke the Labourer and in a long list of comedies, melodramas and semi-musical pieces until, 22 January 1829, came Monsieur Mallet. On opening night, Mary Jane scored a distinct hit with her song, which may just have had something to do with Mrs Yates's decision to cut her song on the occasion.

Soon after, however, Mary Jane's time at the Adelphi was up, and she moved on to an engagement in Dublin. I see her there, in 1830 and 1831 ... and in 1832 she was dead. I don't know why or where, but Henry was again a widower.  But not for long. In 1836, he, too, died. Leaving his all to his four surviving children, with effortful restrictions on the marital affairs of his teenage daughter by Mary Jane. 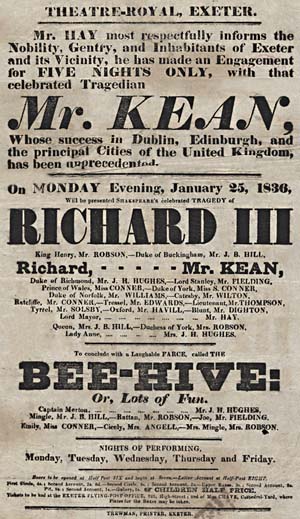 I know it was Mary Jane I was really after, but I'll pop in a wee addendum about Mrs H Hughes III. Frances Hughes née Old (m 7 May 1833) was the wife of Julio Henry Hughes, son of Henry and Sophia, who had a useful acting career at, in particular, the Surrey Theatre. Frances, too, had theatre in the blood: her parents had been favourites for many years at the Salisbury Theatre. I sha'n't go into the careers of JH and Frances ('Miss Frances'), but must say that their first child was another [Mary] Frances, known -- and indeed, well-known, in the London theatres as Miss Fanny Hughes, and later as Mrs Gaston Murray (ie Garstin Parker Wilson).

So, now I know who the Hughes is ... and Monsieur Mallet ... and the sun is just rising on another glorious winter's day ... the lorikeets are at the table, the first bottle of sparkling water is off the ice .. so, here we go again ...

Posted by GEROLSTEIN at 2:56 PM