.
I first came upon the title of The Invincibles when researching the career of Mrs Howard Paul. Her debut bill at the Strand Theatre included it as an afterpiece. I think she may have been in it. Anyway, I didn't really stop to think what the title signified, all I understood was that it was one of those little girls-masquerading-as-soldiers pieces which were so popular in the C19th.

Today, I came upon these two music sheets on ebay, and took a fancy to knowing a little more. After all, Joseph Wood, Eliza Vestris, Thomas Morton, Alexander Lee ... those are big names .. 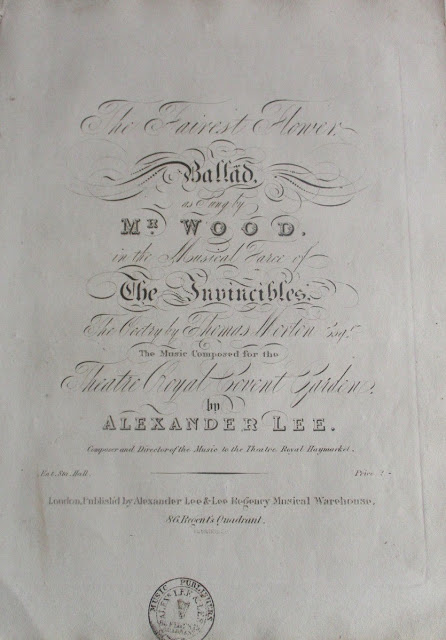 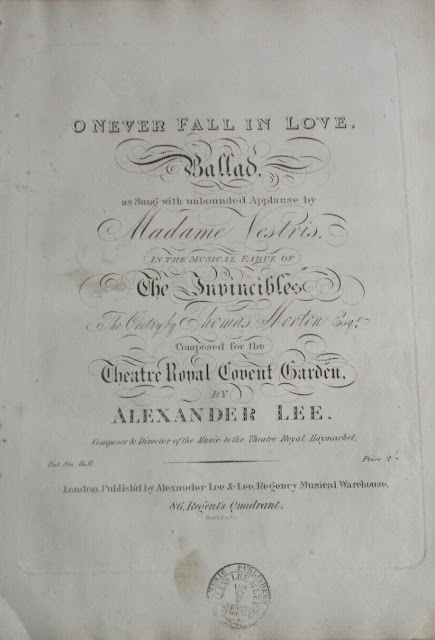 The first thing I discovered was that the title is pretty irrelevant. The so-called 'Invincibles' are merely a brand of soldiery who seem to have been anything but. But the 'musical farce' itself was extremely successful, much-liked by critics and public, and became for decades the reference piece of its type. If a theatre-piece included girls dressed as soldiers in its cast and action, The Invincibles was pretty sure to come up it the notices.

So, why? And what precisely was it all about. Well, I was able easily to find out, for the text in toto is on the internet:

I read it, enjoyed it ... and can report that it is a neatly-written vehicle for four comedians, one comedienne, a pair of loving and singing ingenues, and five ladies of charm.  Setting: the Ruritanian south of France. Carnival night when, Saturnalia-like, anything is allowed. Ingenue (male and military) gets into the home of ingenue (female). Gilbertianly, he has five friends, and so does she, so we can see the act 2 finale coming. Midst a farago of fun, however, the lads are caught by the lady's military guardian (Comedian 1) and, having missed their guard-duty, all sentenced safely to the barrack-prison. There, their guards are a comedy Irishman and two eccentric Frenchmen (Comedians 2, 3, 4) whose banter takes up many a happy page. But the ingenue's maid/confidante (comedienne) has a plan. Seven 'Invincibles' have been called in to increase the guard. The girls disguise themselves as the expected soldiers, get into the fort ... well, suffice it to say that all, of course, ends happily, but till much merriment has been caused, and the feature of the piece, the military drill performed by the seven lasses, under the Sergeant's orders, has brought down the house.

One critic insisted that the piece was a version of a French play, taken from the German, but in an age when 'adaptations' were freely acknowledged, Thomas Morton -- author of Town and Country and The Slave -- mentions no 'original'.

The music was definitely original. I won't start on the huge career and output of Alexander Lee, but the quality of his music was commented upon in the press -- 'the music is better than that usually attached to musical farces'.  But, actually, there wasn't that much of it. Four chorus items, and one song apiece for tenor, soprano and soubrette-comedienne. We have, above, the tenor ballad, and the soubrette song.

The soubrette was Eliza Vestris, who made a meal of the role of Victoire and played it, off and on, for a number of years. Mrs Keeley and Miss Forde both took a turn. But it was no one-star vehicle. John Fawcett played the General in such a way as to be remembered in the role for decades, and Tyrone Power made the one-legged Irishman, O'Slash, into one of the best examples of that much-overworked genre. In later provincial productions, the role became a regular stand-up act. Soon after opening, Meadows, who played the one-eyed jailor was promoted in the billing, and Bartley as the one-armed Sergeant had the direction of the key scene.
The ingenues were, of course, there to sing, and neither Wood and Mary Cawse gave quarter in that field. But Miss Cawse had more to do than sing sweetly and look pretty. She was one of the seven 'soldiers', and took part in the drill scene alongside Vestris, two of the company's lesser actresses (Jemima Scott 'of the King's Theatre and the Coburg', Mrs Brown), the theatre's principal dancer-Columbine, Miss Egan, and two of the ballet (Misses Griffiths and Rees).

The Invincibles was first played at Covent Garden 27 February 1828. I notice it had its 44th performance in January 1829. In 1830, Wood and Mary Cawse were still playing their original parts. In 1833 Vestris was still there, with Power, Bartley, Meadows, Mrs Brown ...  Covent Garden brought it back in 1839, in 1847 it was given at the Lyceum, in 1853 at the Strand ... by which time it had been played around Britain and across the Atlantic where Clara Fisher laid claim to Vestris's role and a certain otherwise-unhead-of J M Rycott had seemingly edged in on affairs 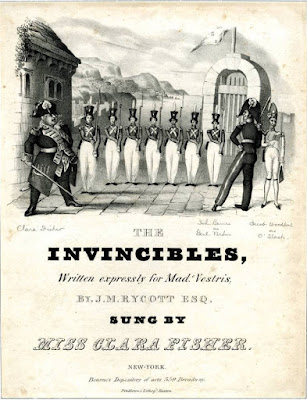 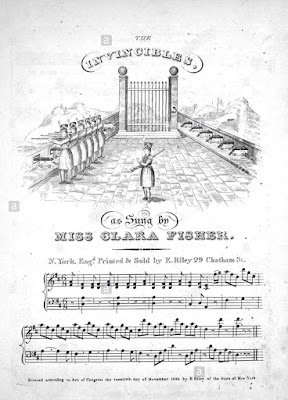 A political caricature based on the show. 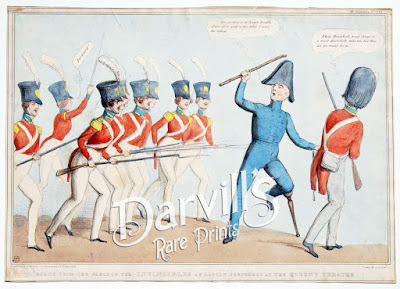 In Australia the piece was played by juveniles ... and O'Slash has become the star part 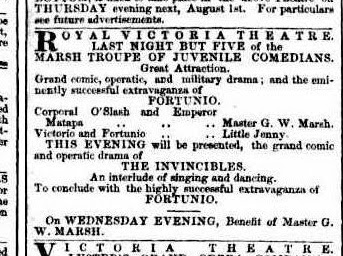 In Southwell, they added a subtitle to make sure everyone knew ...

In Leeds, Miss Paget has sneaked in an extra song 'Vive la guerre', and the choruses are largely billed .. 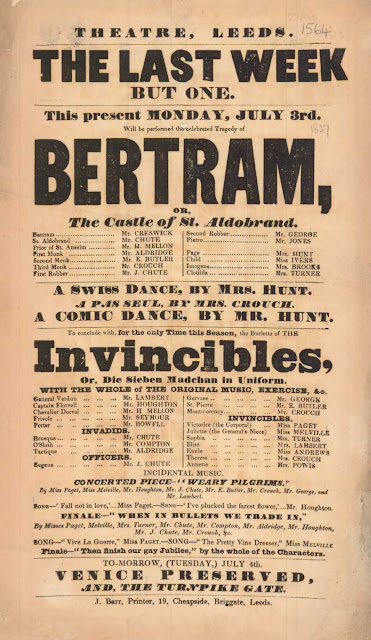 I'm sure I'll find more to add to this item as time goes on ..  but, now, at last, I know about The Invincibles.