.
It's a quiet Saturday morning after quite a hectic week. The air still reeks a tad of the flames of our much-too-near bushfires, extinguished in amazingly brave fashion by the Rural Fire Services and local Volunteers, after destroying thousands of hectares of bush and forest ... 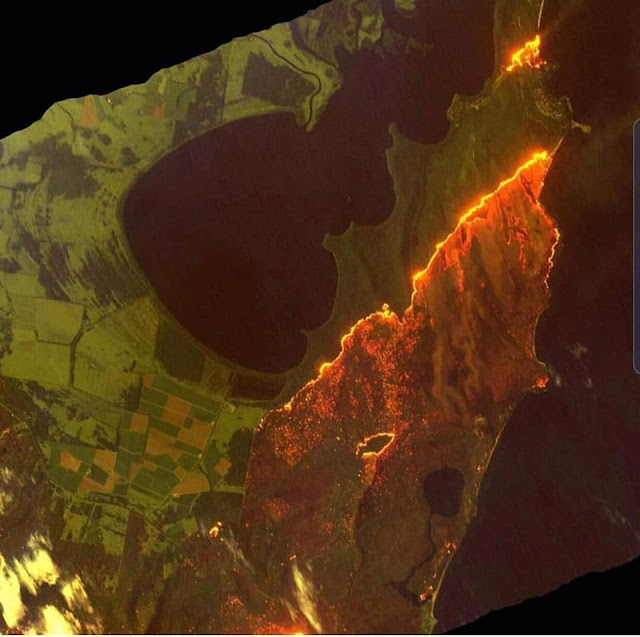 But now peace reigns once more, and I sit at my sunny desk, sipping my sparkling my sparkling water, picking at my chicken-livers and broad beans, and looking over this morning's haul from a trip to ebay ... some nice things!

This, for example. A song from the 'opera', Rose, or Love's Ransom, produced 26 November 1864 at Covent Garden in 1864 by the so-called Opera Company (Limited) as they struggled to take up the mantle of the Pyne and Harrison English Opera Company. 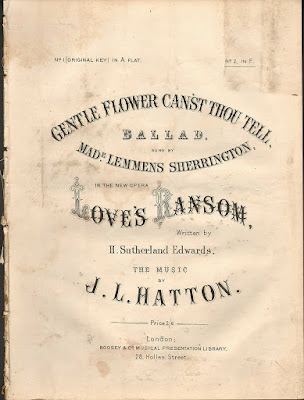 Producing what was in fact a old-fashioned, sentimental copy of Le Val d'Andorre, with much ballad-y music, was not the way to win the successes of The Rose of Castille, Satanella, Lurline or The Lily of Killarney, and in spite of a cast including Helen Lemmens-Sherrington, Elizabeth Poole, Henri Corri, George Perren, Aynsley Cook and the Weisses, it never had a chance. The critics gave it serious reviews, analysed it with kindness, reverence for a well-know songwriter, and gentleness (see an excellent piece in The Standard of 28 November, and a huge one, undoubtedly penned by Howard Glover, in the Morning Post), the management tacked an hour-and-a-half Benedict's The Bride of Song into the programme, as a forepiece. This double-bill struggled through till Christmas hove in sight, Boosey published the above song, and Mme Lemmens gave it at the Halle concerts and at Leeds in January. It was judged 'too trivial' for such a concert. Another song from the score 'I always feared a married life' got a couple of outings, as sung by William Winn, and a quadrille on Hatton's melodies by van Maanen, apparently, briefly, saw the light. But a chorus seems to have been the least weakly survivor: I see it, the 1860s, being performed by amateurs at Haverhill and Royston .. maybe the score was published. Or maybe this is all that remains of Rose.

Now across the Atlantic. Emma Abott-abilia is far from rare. Her organisation's publicity skills were one of the reasons she was, with limited ability and means, able to turn herself and her troupes into long-running and popular enterprises. I don't think I've ever published my let's-get-it-right biographical piece on Emma, but it's a bit long to put here, so let's just have the nice advertising material... 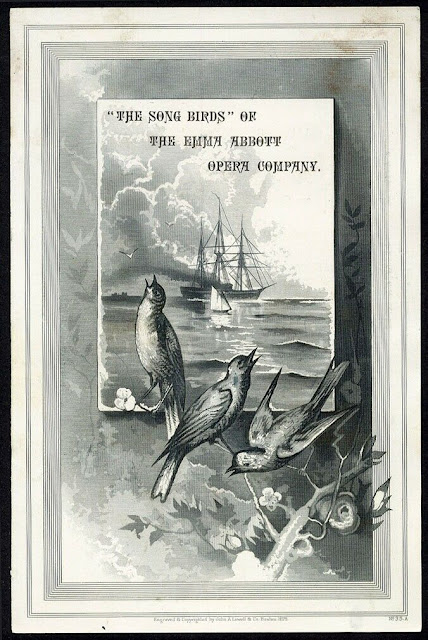 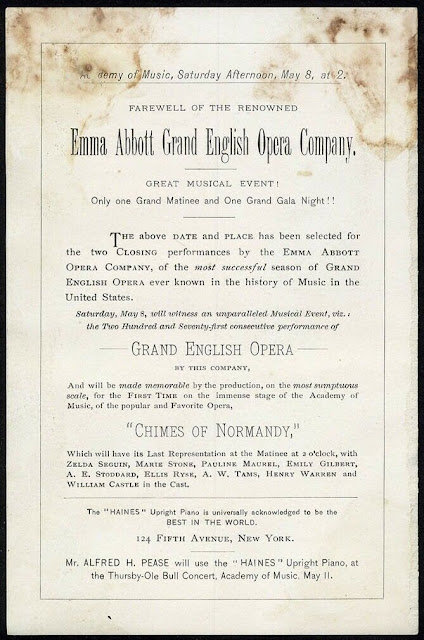 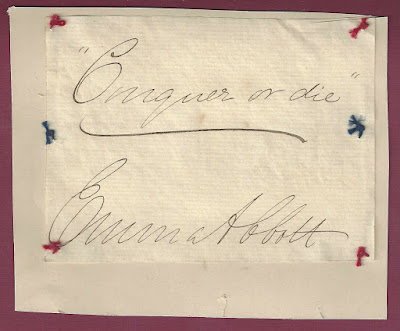 Now, something 'modern'. Well, in my terminology. Here's an American photo from a production of what started out in Hungary as Tatárjárás progressed to German-speaking countries as Herbstmanöver, to England as Autumn Manoeuvres and to America as The Gay Hussars. This photo is from America's version 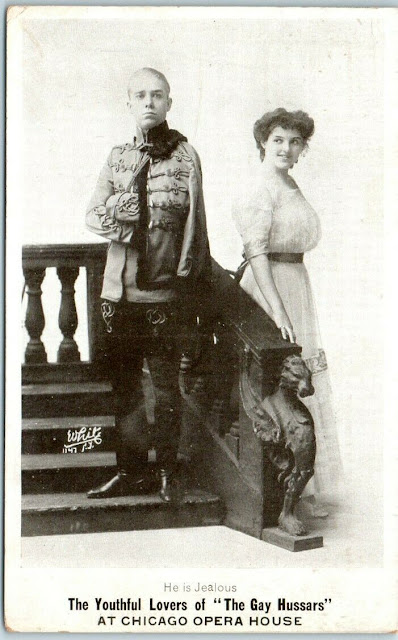 The heroine here is played by 'Sophie Barnard', otherwise Miss Sophie Isaacs (by Leon Eleazar Isaacs ex Sarah Barnard) from Pennsylvania (b 23 February 1886; d San Diego 10 December 1965). Sophie started life as a concert singer, but was engaged by Henry Savage to play 'Natalie' (ie Valencienne) in The Merry Widow on tour. She progressed to starring in The Gay Hussars and the interesting The Red Widow. She then married comedian Louis Anger (b Philadelphia 12 February 1878; d California 21 May 1946), who made a later career in Hollywood where, amongst other exploits, he was once stage the manager of Fatty Arbuckle.

Another central European piece to export well was Die Kino-Königin, which took the Ruritanian world of the moving pictures for its setting and central, hit scene. Here are some photos from Robert Courtneidge's English production. In town, Courtneidge's daughter, Cicely, was featured .. 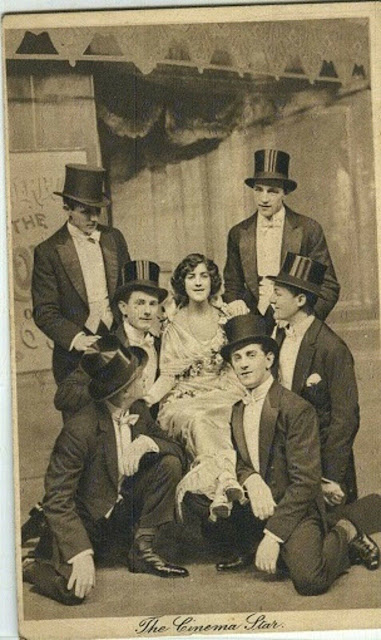 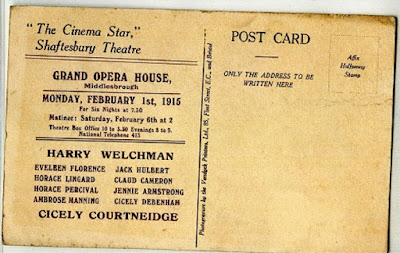 Out of town, its was Miss Hilda Guiver 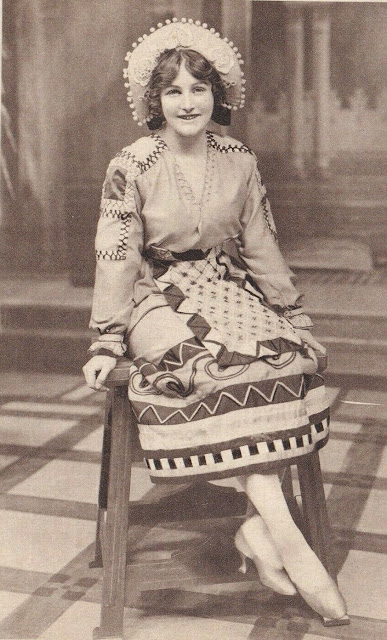 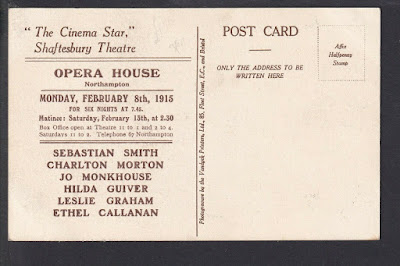 And one more pretty, from the days when scenery wasn't all hydraulics, and pantomime not peopled by minor actors from television soaps. Courtneidge's production of Cinderella at the King's Theatre, Edinburgh, 1906 ... 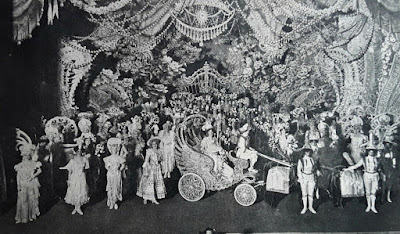 Cinderella here -- I guess that is she, in the coach -- was none other than real musical-theatre star Phyllis Dare. Dan Rolyat was the Baron, John Humphries the Baroness, there seems to have been no Buttons in this version, just one Choddles, retainer to the Baron, and the sisters, stagestruck Arethusa and up-to-date Mopsa, were played by girls. Dandini by a man. Ellen Terry and Beerbohm Tree sent first-night telegrams, and the whole thing was a splendid success.

Nearly lunchtime. So I'll roll things up with a chap who gave me a bit of a giggle. And a bit of a surprise. I mean what are you supposed to think when you come across a chappie, of whom you have never heard, who has inscribed his photograph 'Edgar Wilson, the Santley of the Halls'. Ouch! So I thought I had better delve, and find out just how bullshitty a baritone he was. I didn't have to delve far. 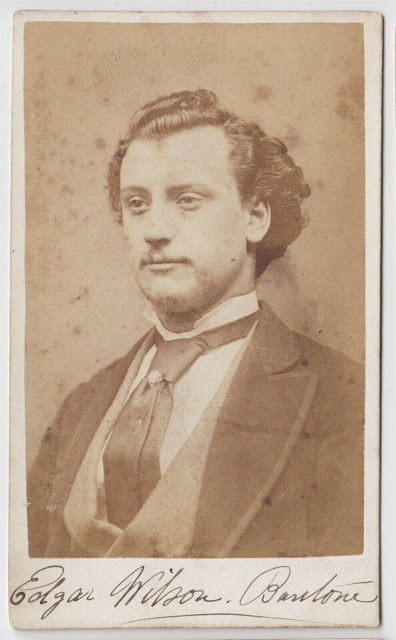 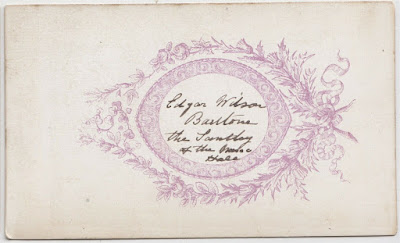 WILSON, Edgar [Charles] (1846-1921) was born in Lambeth, the third son of Edward Wilson, a print-colourer, and his Welsh wife Ann née Rowland. Elder sons, Edward Rowland and William, followed their father into the print-colouring business, but Edward had other ideas. I see him as early as 1863 taking part in amdrams, and by 1866 he is up on the platform singing. He seems not to have been wholly sure as what, to start with -- first up he was billed as a tenor, then took to singing 'The Wolf' -- but he settled briskly down into being a ringing baritone of the staunchly British patriotic-yoho-sentimental kind: 'Hearts of Oak', 'The Bay of Biscay', 'The Desert', 'Will o' the Wisp', 'Hark the Clarion', 'If Doughty Deeds', 'Life is a River', 'The village blacksmith', 'Men of Harlech', 'Nancy Lee', 'Nil Desperandum', 'The White Squall' ...

And that's what he did. For the next thirty plus years. He was always judged, at least, 'acceptable', sometimes 'a very chaste and powerful baritone', 'a baritone of great merit', : no bill topper, but a solid element in the soft belly of a music-hall bill. And never out of a job, as he spent a month or three each year in the London halls, and trouped through most of the major provincial cities, and when necessary the lesser ones, powering out 'Hearts of Oak' one more time ...

He did take time out at home, clearly, for in 1870 he married Cheshire-born Agnes Coyle and began a good-sized brood of little Wilsons, firstly at their home base at Aldershot, later in Liverpool: Agnes Ann, Edgar Rowland, Charles, Joseph ..

In 1884, Edgar joined the Moore and Burgess Minstrels, with whom he sang largely sea-songs, initially for four seasons, and to whom he returned in 1893-4. And in between, he trouped the provincial and latterly the Irish music-halls. His name fades out of the listings around the end of the century, but in the 1911 census, he is still describing himself as 'vocalist'.  'The Santley of the Halls' died in 1921.

Oh, by the way, apart from this inscription I can only find one instance -- in Liverpool in 1879 -- when that sobriquet is used. I'd guess he abandoned it fairly quickly, and that, in consequence, this photo dates from around that time.

Oh, of the children, it seems only Agnes Ann had anything to do with showbusiness. She married one Samuel Ross. Punch and Judy Man ..

PS One more. I can't resist the photo! 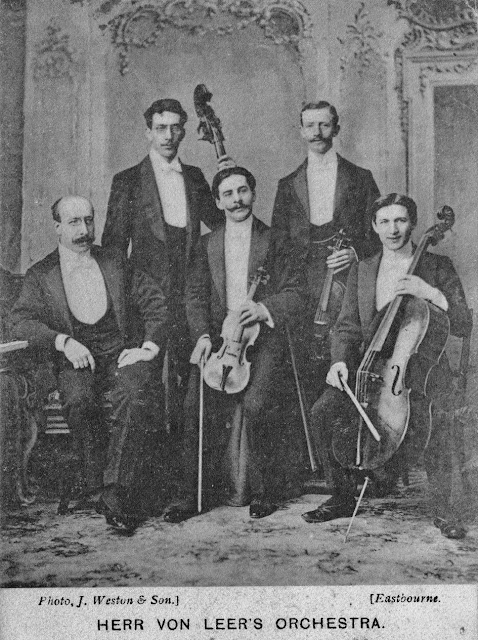 Well, he wasn't a Herr, his name wasn't von Leer, and that looks more like a piano quartet than an orchestra ... but ...

Simon van Lier was born in the Hague, 21 March 1878, the son of one (Jewish) Felix van Lier and his wife, Naatje née Frank. There is a sort of a family tree on Geni, but I think this is one of its distant branches. Anyway, by 1901 23 year-old Simon was in England, making music for his living. He can be seen in the census of that year, living with the Manheim family one of whom was daughter, Flora, who soon became Mrs van Lier. The couple would have two daughters, Felisia (1902) and Beatrix [Ethel] (1910).
Simon's professional life is rather less well documented. At some stage he decided that it was more fashionable to be German than Dutch, and began calling himself 'von Leer'. At some stage 'Herr von Leer's Casino Orchestra' and 'Herr von Leer's Royal Viennese Band' appeared on the landscape. But he found a nice niche at the posh Grand Hotel, Eastbourne where he and his orchestra seem to have featured for quite a while. And when this photo was taken.
In the 1911 census, Simon and Flora and their daughters are sharing their Eastbourne home with Simon's brother, Louis (musician, so maybe one of the quintet?), and Flora's widowed sister, Christine Deitz, and her daughters.
Quite what happened between 1911 and 1939 I know not. But by then Flora and married daughter Felisia Wolff were back in the Netherlands, and Simon was in Westbourne Terrace 'music publisher'. Simon made the right decision. Flora and Felisia perished at the hands of the Germans in Auschwitz.

Simon stayed on in England. In his elder age he remarried (Charlotte Lowenstein), and lived to the age of 88 ..

Oh, Simon has had a weeny revival. One of the ever-changing pianists from his Eastbourne band apparently went on to be pianist on a ship called the Titanic. And anything to do with that much-publicised ship is worth a book and a half. So Simon became a footnote in a (rather interesting) book which mentions, what I assume was not the pianist in this photo ...

Posted by GEROLSTEIN at 9:21 PM