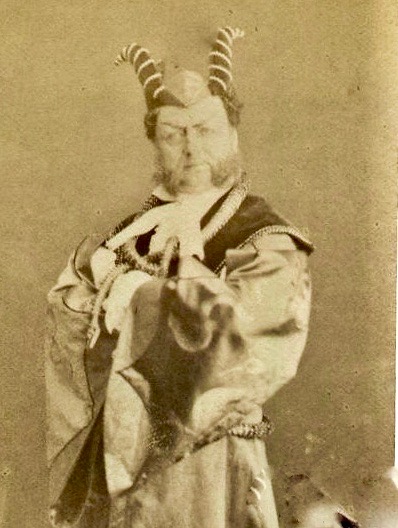 Girardot was for a good ten years a trial (character tenor) at the Théâtre Lyrique, playing a whole register of parts in new French opéras-comiques, of which the best remembered would be Le Dragon de Villars (Thibaut), but which included Clapisson's Fanchonette, Gounod's Le Medecin malgré lui and Ymbert's Les deux cadis. He also took the role of Aboulifar (whoever he may have been!) in the French-language premiere of Oberon.
In 1869, he had a success in the commercial theatre, when he created the role of von Bontronch in Emile Jonas's hit opéra-bouffe, Le Canard à trois becs at the Folies-Dramatiques. 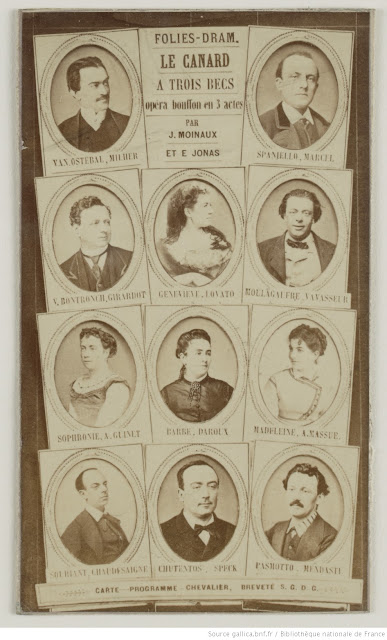 But this photo, allegedly, comes from the Châtelet. What is it? It's clearly a costume and a character from one of their fairytale musical spectaculars. But which? I hasten to a list of his credits. Bah! His roles at the Lyrique are carefully charted, but he's just mentioned as having played at the Châtelet in 1864, and 1867. My copy of Bruyas is on the other side of the Tasman Sea, but 1867 should be easy. It's La Grande-Duchesse year, the year of the Great Exhibition. And the Châtelet played the spectacular Cendrillon, for over 400 nights, at that time. As far as I know, Lesueur and Clarisse Miroy featured ... and anyway, we can see that this garb has nothing to do with Cinderella!

1864 then? Not Gulliver. We have the whole cast of Gulliver 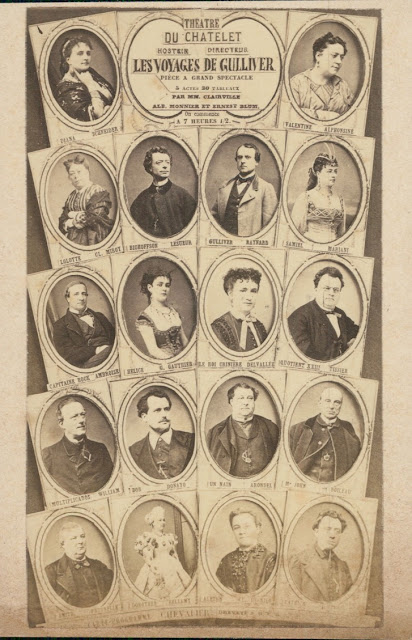 I'm beginning to think that whoever labelled the photo did so whenever Girardin was at the Châtelet, whenever that was, and that the picture is from another show. You know, I'm sure I've seen those stripey horns somewhere, before .... although stripey horns are rather favoured by féerie designers. Like those odd little hats, that look like upside-down ... well, never mind ...

I give up. For now. Be nice if it turned out to be Oberon! Other than that, anyone got any ideas? I'm a little worried that he seems to have changes physiognomy between the Châtelet and the Folies-Dramatiques ...