A soirée at Sitges

.
After our half-day of sunshine and swimming pool, real life moved into action – as it has a habit of doing in this part of the world – at the approach of evening. Our mission for the evening was my Very First Proper Paella, and for that we got out the car and headed out of town, to the village of Sitges.
OK, call me naïve (quite a few people already have), but Sitges to me was just the name of a vaguely remembered Spanish port. What I didn’t know, was what it (or a good part of it) has become. The Blackpool or Majorca of the gay, male holidaymaker. 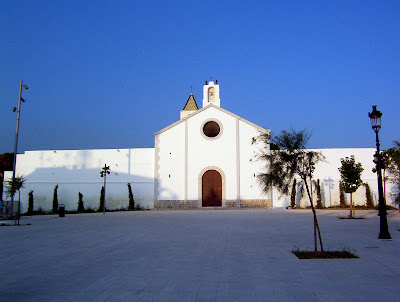 Blackpool and Majorca aren’t at all the towns you think of when you approach Sitges, with its pretty beaches and wide promenade lined with attractive restaurants, the sleekly restored buildings of the original village floodlit above … it has more the air of Monaco, in the years before that poor principality was concreted over.
Happily for us, Guy knew which restaurant was the one to patronise, and we dined deliciously at the Costa Dorada on the lightest, tastiest paella one could wish for. I should have photographed it for the benefit of the culinary world that thinks a paella has twenty ingredients. It doesn’t. And soggy is a sin. A little light white wine, two bottles of a sparkly liquid called Vichy Catalunya which can’t have much to do with Vichy but is one of the nicest mineral waters I’ve ever tasted, a little Irish coffee .. the whole accompanied by a lovely view of the sea and the prettiest, and most thoroughly untrained, waitress I’ve ever met!
A perfect Mediterranean soirée. 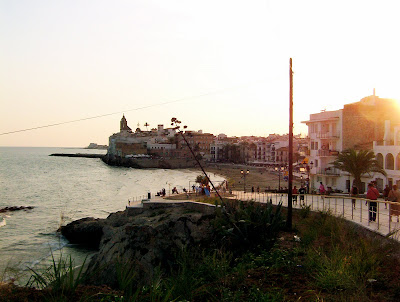 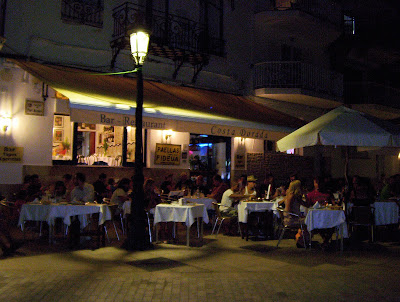 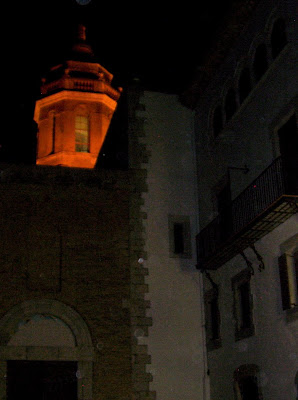 After dinner, it was time to take a stroll through the village, and now the real surprises started. You climb over the little mound where perches the old village and its picturesque church, and voila! on the other side is another Sitges, another bay, more restaurants, more people. You have descended out of Monaco and into Blackpool. A gay Blackpool. You move off the front, into the streets and squares behind, and there are men everywhere … flooding the footpaths and roads, bulging from the bars, and strolling, strolling, strolling … I felt as if I had migrated into some strange science fiction film… Thomasinetta of Finland?
Guy, who evidently had no wish to partake of a gay bar (and neither did I), picked us an inoffensive-looking terrace table: but his nose didn’t work as well as it had for the restaurant. We’d chosen a spot at what appeared to be the hub of strollers’ promenade, and right opposite the gayest of bars. In the time we sat there, there must have been a thousand or more men, very often in pairs, wander past. Jean says there were lots of different types, but I didn’t see that. To me, large or small, young or quite old, emaciated or bullockish, they looked all cut to the same pattern: a simple, rather sad, caricature of that gay ‘look’ of the last decades, which I find so ridiculous and so twee. And everyone from the wannest, fesseless Asiatic to the grotesquely gymnasiumed American, seemed so plain, so unattractive, so joyless, so unimaginatively decked out in plunging t-shirt and shaven head … I could only think, selfishly, ‘God, if I ever thought I came over anything like that…’. Evidently, though, I don’t. Evidently I didn’t fit in. Jean and Guy confirmed, with a grin, that I was being ‘looked at’. Since no one in their right senses would ‘look at’ me for 'appreciative' reasons, when tall, handsome, thirty-something Guy was sitting right alongside me, I suspect my unsuitability for the streets of Sitges was only too evident! But hey! I’ve seen it. (It’s seen me?) And I think I might forget the idea I once had of going on an all-male cruise voyage next year: Jean says I’ll meet exactly the same gang there. 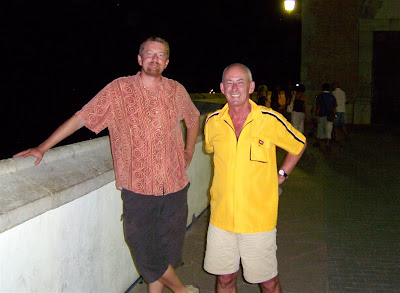 We wandered back to the sophisticated end of town, now closing down for the night – the prettiest waitress was showing more aptitude with a broom than she had with a bottle-opener -- via some little back streets ... to where had the thousand men who had strolled into those streets during the past hour disappeared? Behind some of those gloomy doors? The ‘Bears' Bar’ didn’t seem very active, and, anyway, I had a horrid suspicion that a Sitgean bear might be a gymnasiumed cublet from Kentucky or Yokohama, with a swishy tail…
Obviously, there’s a thriving tourist traffic and a large public for gay Sitges. But count me out.
You know, I have a strange feeling that there is no ‘place’ for me. A place where one can relax, dine, meet, drink and chat with other Gentlemen who have no wish to be anything but themselves, and most certainly not a cliché or a caricature; who have no need of plunging t-shirts and leather wristbands and all the curious paraphernalia of 20th and 21st century gaiety. If anyone knows differently, do let me know, but I can see myself forced finally to take refuge in the Garrick Club or the Jockey Club.
Posted by GEROLSTEIN at 3:52 AM

What a great Paella...