My brother, the poet

A big day in the Gänzl/Gallas family. My brother, John Gallas, has just carried off the first prize in the 2009 Welsh Poetry Competition with his work 'The Origami Lesson' 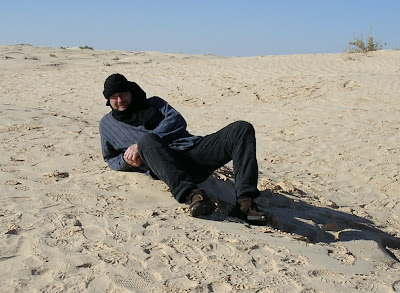 To make Derry Railway Station,
fold the gentle Foyle
beside this end, thus,
where the train breathes at a slight curve,
and for the white fence,
press the line
upon the middle crease
in a fine rain, then
unfold the sheeted roof wing by wing
in line with dim bridges
and the rounded wall.

For Evarethilion,
begin by folding lengthwise
and separating
amongst bright enamels.
To make the unearthly shine,
fold the top point –
which will be the blade –
into a garnet beast, and double back
the silver pommel
into the dotted fist.
Align the creases as if
a rainbow were a staircase
upon which
folded feet boldly tread.

The leaping gnu.
You may use the shimmer
from a lake amidst grassland,
but a hill will do.
Divide the top half into three hearts:
cow, horse and goat.
Take point X upon the hoof
and fold the top edge, thus,
upon its grunt,
so it is roughly equal
to the distance from
the far sun that pours
beneath black clouds to the brown,
dusty horizon.
To make the water,
turn the world over,
and crease.
Your gnu will fall from the mountain fold
towards sunset.
The valley fold will open upon it,
and his beautiful beard
will make a tasselled shadow.

Judges' comment:  the origami lesson, by John Gallas
The winning poem struck me immediately as a glorious ‘leap’ of the imagination (rather like the ‘gnu’ in verse three!). I admired greatly the notion of creating places and animals out of paper intricacies and the spare, instructional tone is wonderfully counter pointed by the glint of its language throughout. It moves so very subtly, verse by verse, from the mundane to the mythical and on to a conclusion which brings all the elements together in a gently universal manner without the need for any kind of grandiose statement. It recalled haiku both in content and style with its emphasis on the tactile and visual and with its vital purpose – ‘No ideas but in things’.
Posted by GEROLSTEIN at 6:51 AM