I have been to the cinema

.
Not world-shaking words for most people, but for me, yes. For I am a man who has been to the movies only a few dozen times in his life. I think the last time was for that ‘coarse-acting’ No Bed for Bacon film about Shakespeare in Love, which was enough to put anyone off trying again. Prior to that, I remember from my London years A Passage to India at the Saville, Broken Blossoms and the original Star Wars at the Dominion, and a very bad A Little Night Music at the Curzon. But, over the last three decades, I think that’s about it.
Tonight (Weds), we zoomed across Berlin on Kevin’s motorscooter, took in a nice light supper in the thoroughly beautiful Viktoria-Luise Platz in Schöneberg, and then headed on to the Odeon cinema and the big event. Inglourious basterds (the spelling is important in showing the film’s intentions) is apparently the Big Box Office BlockBuster of The Entire Planet at this time, so I was being brought in at the cutting edge of 21st century world cinema. 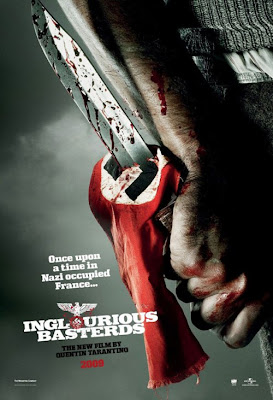 So what did I discover? What did I think? I discovered that, in the entertainment world, some things never change. They just get metamorphosed into the language of the times. This film tells a slim tale of a couple of plots to blow up the leaders of the Third Reich (yes, them again), and it tells it in what I think of as the transpontine melodrama style. Lots of simple, exaggerated scenes, two-dimensional acting, colour and movement, bags of manufactured ‘tension’, and, of course, in textbook String of Pearls fashion, buckets of gore. Or, as a little feller I know once said, not ineptly, ‘guckets of bore’. It is the story of how a bunch of fictional Americans (with a little help from a Jewess and a negro) won the war. Haha. Well, it would be ‘haha’ if I were quite sure that a certain part of the population might not take the antics of Lt Rambo Raines and his Dirty not-quite-a-dozen for real.
In traditional fashion, the film ducks from the absurd to the campy, from the extravagant (and of course the gory) to the vastly sentimental, doing nothing by halves, and all the time resembling nothing so much as a vaguely humanised 20th century Japanese cartoon. The ‘action’ kind rather than the pornographic kind (for sex doesn’t get a look in in this show). 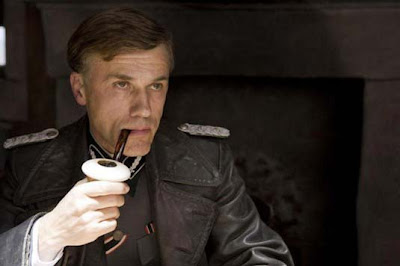 This means, of course, that the actors don’t really get to act, although apparently many of them are well known. Not to me, though. I guessed that Brad Pitt (I mean you can’t live in this century without having heard the name) was the one with the second-best part and the cornpone American accent, but that was it. I presume the film will make a very big star of Christoph Waltz (above) who camped the chief baddie in great Robert-Helpmannesque style, and will doubtless camp it again and again, for although the body count in this film is enormous, and nearly the entire principal cast is exterminated in one delicious way or another during the variegated massacres of the evening, both Lt Raines and his antagonist are still alive at the final curtain. So I guess we will have Inglorious .. whoops, Inglourious .. Basterds two, three and twenty-three. Since they have done for the Third Reich, I guess they will move on to extinguish Mussolini, Eva Peron, Fidel Castro, Idi Amin, Colonel Ghadaffi and the United Nations Central Committee to the ringing of tills and the rewriting of the history books.
Whew!
So, the big question. After this, my rebaptism in celluloid, will I go to the cinema again? Maybe. But if I do, I think I shall pick something less determinedly ‘popular’.

PS This was the second time during my Berlin stay that I’ve been to a show featuring a burlesque Hitler (see the already departed The Producers). It really is dreadfully vieux jeu now, maybe someone can come up with something new? Like cowboys and indians?
Posted by GEROLSTEIN at 1:34 AM