I suppose I expected my visit to Barcelona to be largely sunshine and swimming, eating and drinking, a little sightseeing ... and quite a lot of sleeping. I certainly didn’t expect it to bring up one of the most enjoyable nights I’ve passed in the theatre in many, many years. And Shakespeare at that! Worse, Shakespeare in French with Catalan subtitles. Worse still, A Midsummer Night’s Dream, which I’ve seen far too many times, from New Zealand amdrams to the RSC, and always found an hour and many a rude mechanical too long.
Not this time.
Our afternoon of wandering amid the alleyways of old Barcelona over, we headed for Mataró, on the hills behind Barcelona where the annual Shakespeare Festival (number seven this year) takes place in a little amphitheatre in an amazing private complex, for a 9.30 curtain. Nine thirty already! But it didn’t happen. The electricity had blown. So the audience dallied, drinking in cava and the glittering view over the night lights round the bay of Barcelona until power was restored around 11pm… You simply couldn’t wish for a lovelier or more suitable setting in which to dally.
But, of course, a setting with nothing it is worthless…
How to describe this slimmed, all-action, unselfconscious, rich comedy version of the Dream (En attendant le songe), played with inexhaustible energy and just the right level of grotesquerie by an all-male group of seven? Or was it six. Or was it sixteen? I’ve seen this kind of small-cast/large-cast production so many times, but I’ve never seen it done so well. You stop marvelling at the quick changes, and wondering which actor is playing whom: you just accept the characters. I think Hippolyta and Puck were the same person, but only because he was the tallest actor. At least I think he was. And surely the Wall and the catamite weren’t the same fellow... Bottom’s pigtail and waistline gave him away, as did Theseus’s bald spot, but apart from that… 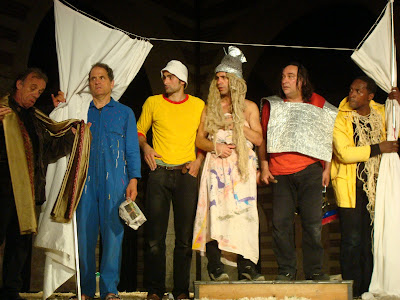 But the wonderful thing about this Songe is not its cleverness and its professional slickness (both of which are natural rather than shown-off), it is the fact that … goddamit, it made me laugh. Out loud. Frequently. A Midsummer Night’s Dream is written as a comedy, but I can’t truthfully say that it has made me laugh very often . Not till tonight. And tonight made up for all the dreary Dreams I’ve suffered from the Aldwych to the Antarctic. I guffawed.
Memorable moments? I think Puck’s deliciously original girdle round the earth was the winner for me. But the vision of Titania in a gold lamé wrap floating across the swimming pool on her ceremonial life raft (a touch added for this occasion as most theatres don’t have a swimming pool!) with infinitely more poise than Elizabeth Taylor, will stay long in the memory…
OK. Its time to tell you just what this company and production are. It is the Compagnie Irina Brook – and I suppose I have there to tack on ‘Irina, daughter of Peter’ – and the piece was put together by Ms Brook (director) and Marie-Paule Ramo several years ago to be played at a Festival at Brétigny. Since then its been given on a couple of hundred occasions around Europe, and doubtless there will be several hundred or thousand more, although the company is following up with versions of Don Quichotte and The Tempest. All I can say is, if they are anywhere at all near you, for goodness’ sake don’t miss them. They are a perfect theatrical treat such as one doesn’t see too often. They give weary old theatricals like me –blasé with too many shows over too many years – a great boost of fresh air and interest. They prove just what fun the theatre can be.

Photos hopefully to come
Posted by GEROLSTEIN at 3:42 AM