'Mademoiselle de Varny' or, I've got a little Liszt

‘Mademoiselle Devarn[e]y’ has gone down in history largely because of one engagement of a few weeks’ duration. It wasn’t that she was a particularly outstanding vocalist. But she got momentarily attached to a fashionable and famous performer, whose life – including his half a dozen weeks touring in her company – has been minutely written about. And she, thus, has become much-quoted footnote fodder. Later, she became friendly with another ‘celebrated’ gentleman, to whom she wrote letters, which have, likewise, been thoroughly pored over and annotated in latter days. The gentlemen in question were (1) Franz Liszt and (2) Théophile Gautier.

When Louis Lavenu was setting up a six-week concert party tour, for August-September 1840, with the Abbé Liszt as his topliner, he hired two lady vocalists as makeweight support acts for his star: the teenaged mezzo Louisa Bassano and ‘Mlle de Varn[e]y’. Few people knew of her. When she had made her first London appearances, months before, as ‘prima donna of the Académie Royale’, the press commented ‘we never heard of this prima donna’. Nowadays, only the annotator of Gautier seems to have any idea about her at all. The websites which try to merchandise her portrait cop out amusingly with ‘she must have done something…’ So I thought I’d try to find out. 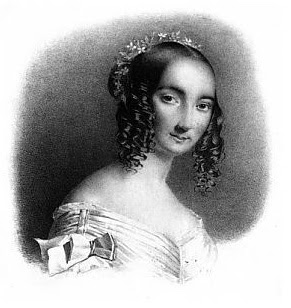 The lady was apparently born in Valenciennes (not in Brussels or Belgium), under the name of Hortense de Pauw. She studied, as did her sister, at the Brussels Conservatoire, under Mons Cassel, and was awarded a deuxième prix for chant et vocalisation in 1834. I see her at the school’s concerts, singing The Creation and ‘Giorno di orrore’ with Mlle Vanderperren (the future Mme Mortier de Fontaine). She sang at various concerts over the next years, and a letter survives, written by Fétis to the Director of the Paris Conservatoire, dated 1 May 1837, on her account: ‘elle a de la voix et du talent, est excellente musicienne, dit la comédie avec esprit, et possède, comme vous verrez, une figure agréable. Nourrit […] lui a donné le conseil d’aller à Paris et d’y débuter soit à l’Opéra soit à l’Opéra-comique ..’.

She duly moved to Paris to study further with Bordogni and with Ponchard and, when she auditioned for Meyerbeer, Halvéy and co, at the Paris Opéra, she was given a debut as Ricciarda in Guido e Ginevra and as Alice in Robert le diable. The result was not sufficiently conclusive, and she moved on, though one newspaper cried that she should have been tried at the Opéra-Comique, and, when Le Courrier des Théâtres announced her engagement for London, he described her as ‘une cantatrice qu’on a trop peu entendue’. In 1839, when she appeared in Parisian concert the press mumbled ‘une jeune et belle personne qui n’a fait qu’apparaître à l’Opéra, ou on n’a pas eu le temps de l’apprécier’.

Mdlle de Varny (by any other spelling) arrived in London in the early weeks of 1840, and made her first appearance at Julius Benedict’s Concert (7 February, ‘une jeune française dont le talent a été justement apprécié et encouragé’, 'a fine voice', 'a soprano voice of good quality and considerable compass'), before her debut at Her Majesty’s Theatre as Eleonora in Torquato Tasso (3 March). ‘In spite of a rather agreeable person and considerable powers of vocalisation, she, perhaps from excess of fear, failed to please every correct ear…’, ‘a cultivated singer and executes with care [but] her voice is shrill, without light and shade, and her acting without feeling’. She was clearly not going to cut it as a prima donna alongside Grisi, Persiani and Viardot Garcia. However, she was cast as Agnese del Maino to Persiani’s Beatrice di Tenda (interpolating a Mercadante aria), and, although she pleased ('a very able representative' 'the only fault to notice in in her is a contortion of the mouth, unpleasantly visible when she exerts herself strongly', 'entitled to praise'), she still failed to excite. In July, she sang Jane Seymour to the Anna Bolena of Grisi, and, this time, evoked much warmer praise: '...good both as a voice and as a singer. Her appearance too is pleasing, and should she remain to play the Jane Seymours and Donna Elviras after her short-lived reign of absolutism has closed, she may prove an acquisition', ‘This lady has greatly improved … in the duet with Grisi she sang with much expression and taste. We question whether the part of Jane Seymour has ever been so efficiently supported. M Laporte should allow her to appear a little oftener’.
He didn’t. Allegedly, because Grisi’s cousin, Ernesta, was in the troupe, and the star required that she should be often cast, in spite of being ‘a very inadequate representative of almost every character she attempted’. She sang at the Società Armonica ('Robert, toi que j'aime', 'Collei Sofronia' with Colletti, 'Quanto amore' with Lablache, 'Casta diva') ...

And so, the season came to its end, and Hortense joined the Lavenu-Liszt tour. Liszt’s letters described her: ‘La Compagnie se compose de Mlle de Varny, qui vient d’épouser le rédacteur d’une nouvelle feuille française qui se publie à Londres, l’Alliance. Elle est plutôt bien que mal. Tournure et manières françaises (comme la Olivier)! Prima donna assoluta, c’est-à-dire absolument détestable’. Fair enough singer, but oh! the manners and mannerisms! This quote has been repeated by Lisztmanians as if their hero was simply saying Hortense was 'absolutely detestable'. That, of course, is not what the pianoplayer said at all. He said she was 'plutôt bien'. It was her off-stage minauderies that he didn't like. Thus is history perverted. The husband, by the way, was apparently a Mons Lemoine. Gustave Lemoine the writer? I can find no trace of his newspaper.

I notice that the sixth Duke of Devonshire's papers include a letter from Hortense, written from the Old Ship in Brighton and dated 26 August 1840. I wonder what she was doing writing to him. Had she had a taste of the "Cavendish banana"?

Mlle de Varny did not return for the second Liszt tour. She headed for Rouen, for Belgium, and, if she rather than her sister or fellow-student is ‘Luigia de Pauw [-De Roy]’, she did a season as prima donna at Mondovi and, in later 1841, turns up at Ancona (Elizabeth to the Maria Stuarda of Desiderata Derncourt). It must be she at Messina: 'Madame Lemoine de Varny' sang Beatrice di Tenda and Lucrezia Borgia, evoked ‘Sie ist schön und hat eine schöne umfangreiche Stimme’, and then moved on to the Naples theatres for three months. She began unsteadily at the Fondo, with a nervous Lucia alongside Colletti and Fraschini, ‘elle n’a pas été applaudi’ in Luigi Savj’s L’Avaro, and, as in London, ended up playing second roles, notably as Ines to the Maria Padilla of Tadolini.

There is a mention, in one paper, of her taking over from Belloni as Adalgisa, to the Norma of Montenegro, during the Carnevale/Quaresima seasons at La Scala in 1844, but another sheet credits someone different. And, again, appearing with Montenegro at the Italian opera in Vienna. And in June 1845 ‘Madamigella Depaux-Devarny’ can be seen at the Salle Cluysenser, Brussels, playing Juliet opposite Mme Giannoni in I Capuleti e i Montecchi. Only now she is calling herself ‘Signora Albani’. I wonder why. So, was it she playing I Puritani at Vercelli, with the tenor Antonelli, at Carnevale 1842-3? Is she the Eugenia Albani at the Teatro Sociale, Mantova, in the same opera? Ah! It’s clearly she (Mme Albani-Devarney) doing that Adalgisa, after all. And she was ‘applauditissima’. Belloni had decided the part wasn’t suited to her and got ‘indisposed’. ‘Signora Albani’ as Lucia at Pavia, Rossi’s Il Borgomastro di Schiedam at Alessandria, Eugenia Albani at Novara, autunno 1844 in Donizetti’s L’ajo nell’ imbarazzo, Nina pazza per l’amore .. at Como as Lucia with Sesto Benedetti and Scapini and in Il Nuovo Mosè ..

That Brussels engagement was a bit of a horror. She had a brush with the gas lighting and ended up in flames. She was evidently not hurt ... I see her the next week as Adina in L’Elisir d’amore .. but, then no more … was this the end of the career of Madame Lemoine alias Hortense de Pauw otherwise Mlle Honorine, Hortense and/or Olimpe De Varn[e]y, otherwise Madame [Eugenia] Albani? I know no more. But, in her time, if my identifications are correct, she had sung at the Paris Opéra, at Her Majesty’s Theatre and La Scala with Grisi, with Persiani and that piano player, Liszt … Not a bad record.

Alas, De Pauw is not as uncommon a surname as I'd hoped. What to think of a concert programme dated Ghent 6 March 1845, where Mme de Pauw-De Roy sings an aria from Corrado d’Altamura and another from Inès de Castro, accompanied by … Monsieur [Liévin] de Pauw-de Roy …! This Madame is already around in 1841 .. and still in 1847 .. Monsieur is a composer … and a Mlle Louise de Roy is another co-pupil of the sisters. The Luigia spotted in Italy, maybe. And then there are the posh de Pauws ...

And then I come upon the Cambridge UP (oyoy!) suggestion by Ms Kimberley White that Hortense's real name was Hortenzy de Paun (Varinsky) -- that doesn't sound very Valenciennes, more Warsaw! -- I wonder where that bit of [sham]info was pulled from -- and that she disappeared after 1842. Sigh. She didn't, of course.

Oh, dear. I’m afraid this one isn’t over yet … but at least now Alamy will know who the lady was!
Posted by GEROLSTEIN at 2:07 PM