Over the past years, I have researched, compiled and written nearly a thousand biographical articles of Victorian singers: the great, the good, the mediocre, the embarrasing ... A hundred of those articles were published in my book Victorian Vocalists. Some have been 'published' on this blog. About seven hundred are still sitting on this computer, regularly updated as I come upon extra crumbs of information.

However, what I come upon much less frequently is photographs of my singers. Particularly those who had short or unstarry careers. There was jubilation in my heart the day I found a portrait of Isabella Amadei (wrongly spelled) on ebay ... 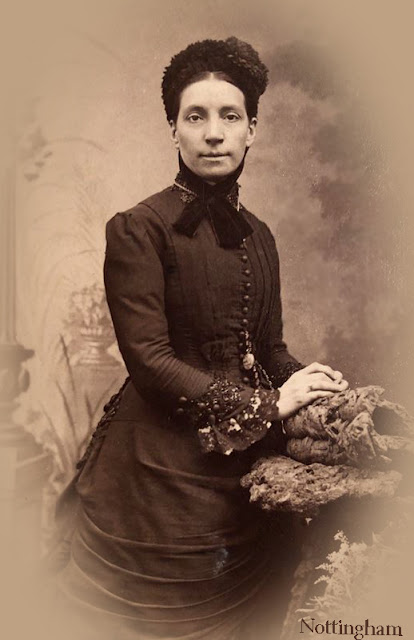 Like so many would-be vocalists, of some talent, Miss or Mdlle Cafferata had a struggling career …

Now, many a time and I’ve had cause to damn the amateur genealogists who infest the WorldWideWeb with their semi-imaginary family trees. But the Cafferatas are well-documented and the family have come up with some fine photographs and, best off all, an autograph letter written by Louisa, aged 31, freshly down in London and trying to make a go of a singing career. It is a wonderful letter … well, it speaks for itself, so I hope the family won’t mind if I quote from it…

I am glad to be able to send you the intelligence that this morning my “Impressario” gave me the good news that I am fit to sing, tomorrow if necessary. I have worked hard, you may be sure and I can see what an immense deal I have yet to learn and obstacles to overcome, but I feel inspired with a faithful belief that if I steadily keep for the goal, I shall win the crown.

You see how much I have to thank Mr. Helsby for. Only today Mr. Mori told me I owe my quick preparation to the five years I have worked under him, for he says all Italian schools stipulate for six years training, before excellence can be attained, and he told me I had learnt so much before I came to him that the rest of the way is easy, though you may be sure it seemed very hard to me.

I daresay it will interest you to know that I was kept entirely to exercises for the first month, and these were trying, that although I was in the habit of every-day work, I suffered much from exhaustion, but I persevered and can now go through my three hours, per diem, with comfort. Besides studying a new Oratorios and the principal airs from Figaro I have learned about sixteen songs by Mendelssohn, Hubert, Beethoven, Mozart, Rossini, Handel, Haydn, Gounod, Mozart, Benedict, Weber and Mori. You will imagine that my time has been fully occupied for I am compelled to study Italian and French and the strain on the mind is very great when so many different authors have to be interpreted. Of course, I suffer a good deal from headaches but I must expect that….’

She ends with ‘I shall be up to the eyes in business now until my debut…’.

Mr Helby was the Liverpool music master William Helby, who had evidently been teaching the Cafferata girls in Liverpool. Mr Mori was Frank Mori, a prolific teacher, who died in 1873. He lived three doors from Louisa’s lodgings. In 1871, he was teaching at the London Academy of Music, where Louisa was a student. Not a prize one, though, for although the Academy handed out many a medal and award, she was not amongst the winners.

As for the ‘debut’ .. well, she didn’t leave the Academy for over another year, but in the meantime I see her performing at the National Orthopaedic Hospital (13 December 1871), with another Mori pupil, Mr Graham, alongside the recitations of Amy Sedgewick, at the Swindon Mechanics Institute (9 April 1872) and at the Beethoven Rooms with the Schubert Society (9 May). At her last school concert she sang ‘Softly Sighs’ and was ‘in every way excellent’.

Her real debut came about in autumn 1872, and it was a dream of an engagement. The great Liverpudlian baritone Charles Santley was heading out a top drawer concert party for a considerable tour. He was supported by diva Florence Lancia, top mezzo Eliza Enriquez, the rising young tenor Edward Lloyd, outstanding concert singer Michael Maybrick … and the unknown 32 year-old Louisa Cafferata. Agent, George Dolby. Who was the manager of the tour.

Louisa gave ‘I’ve been roaming’ and Pinsuti’s ‘I love my love’ or Mendelssohn’s Swedish Winter Song’ while Miss Lancia did ‘Qui la voce’ and got pretty well passed over in the notices, except in Glasgow, where the critic took a hatchet to her: A more unsophisticated appearance we have never seen. Her style is crude in the extreme’

She seems to have picked up very few concert engagements in 1873. I spot her in Belfast singing ‘The May Song’, ‘The Nightingale’s Trill’ and ‘Crudel perche’ with J L Wadmore at the Monday Pops, and at Hastings in the Lobgesang, but she was instead engaged for a theatre job: playing Clairette in a touring La Fille de Madame Angot company run by one ‘Lasseur de Tremblay’ alongside Knight Aston and Charles Campbell (both future international leading men in opéra-bouffe) and Annie Beresford. She was announced as ‘from the Bouffes-Parisiens’ but they really should not have tried that on Liverpool. She was easily recognised and mocked.

It seemed that, in opéra-bouffe, she might have found her niche (‘she possesses a voice of much sweetness and power while her arch and pleasing byplay and her graceful carriage proclaimed her an actress as well as a singer..’) but when the tour ended, in 1874, she didn’t follow up.

She went to the Brighton Aquarium, got herself a new agent – Mr R D’Oyly Carte’ – and went to the Leeds Theatre Royal to play principal boy, Prince Precious, in Hop o’ my thumb, opposite Emily Leng and Fourness Rolfe. She returned to the provinces, acting in comedy (Lillian Vavasseur in Now Men for Old Acres) …

She was back in London, in April, disengaged. On the 18th her advertisement appeared in the week’s Era, three days later, she was dead.

A death certificate would tell us why.

One fine engagement as a concert singer, one good one as an opera-bouffe player, one pantomime  -- in descending order – then a small acting job in the provinces. Poor Louisa Eliza, it wasn’t what she’d hoped for, you can tell …

Posted by GEROLSTEIN at 6:17 PM