A curled darling of the salons: Who was 'Léonce Valdec' and what became of him?

This morning I came upon a photo which set me wondering afresh on a mystery I had tackled a few years back...  so I thought, while the drills are drilling, and my kitchen arising from its ruins ... try again, Johnny.

Well I'm sad-happy to report that I found nothing new ... and I don't suppose I'll get round to tackling Mons Valdec again .... so I post my findings here, in the hope that someone, somewhere, one day will find it useful or, better still, fill in my gaps ...

For fifteen years, the light baritone known as ‘Léonce Valdec’ was the darling of the Paris salons. I would have expected his history to have been paragraphed by the fashionable papers, his death garlanded in obituaries, his name to have appeared in many a memoir … but no. Hardly a mention, outside his concert reviews. Very little clue as to who, precisely, he was: and when there is, the clues are contradictory.

Clue number one comes from an unlikely place. The 1871 British census. He (as Waldeck, which just may have been his name) happens to be in town, and tells us that he is 30, born in Cognac, has a 27 year-old wife named Maria who comes from Herne Bay and a two year-old son by the name of Albert, who was born in Paris.

An issue of Comoedia from 1933, talking of the colourful Count Max de Waldeck, assures us that the singer was his son, and that he committed suicide. Both pieces of information, if true, would surely have been mentioned before. The allegedly 85 year-old count (who, equally allegedly, lived to 110) did apparently have a son by his 17 year-old English wife, and that son did indeed sing, but he was named Gaston not Léonce, was a basso profondo, somewhat younger, and when he gave a concert one kindly journal commented: ‘M G de Waldeck, qu'il ne faut pas confondre avec le gracieux baryton Valdec, est fils du célèbre peintre de Waldeck qui vient d'accomplir sa cent-huitième année…’. So we’re back where we started.

There are other, possibly misleading, little ‘facts’ dropped here and there. I see him called a pupil of Romain Bussine, and a ‘lauréat du conservatoire’. The two fit together, but both are mentioned only once, that I can find, and I don’t find him in the Conservatoire lists. In fact, the only Cognaquois mentioned are an actor and a bassoon player. 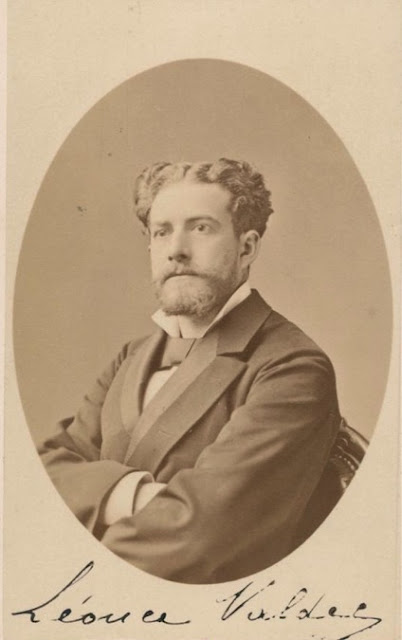 Whether the 'handsome' Waldeck had yet begun his conquest of the salons of Paris and its countesses and duchesses, I do not know, but in 1870 he crossed the channel to partake of the London season. He began singing for Benedict at a Dalston Hospital Benefit (30 March), then at Clara Schumann’s concerts, as featured vocalist alongside Edith Wynne. I’ve picked up a good number of appearances during the season – Amy Perry’s concert with the Doria sisters and the pupils of Lansdowne Cottell, the New Philharmonic concerts singing Gounod’s ‘Le Vallon’ alongside arias by Pauline Lucca, a Benefit for a Day Nursery, or Marras’s at home (‘O Lisbonne’, Mireille). ‘This gentleman is likely to prove a great acquisition to the platform’ quoth the press, ‘his pronunciation is pure, his intonation pleasing, his style gentlemanly, and his voice both rich and sympathique’. He sang for Kuhe, Madame Celli, Cottell again, at the concerts of Annetta Zuliani, Emma Wildish (Gounod’s ‘Voulez-vous aller’), Mary Elizabeth Walton, Julius Benedict, Antoine de Kontski, Henry Holmes … ‘pure tone and admirable expression’, ‘a pleasing French baritone’ and on 6 July gave ‘his second morning concert’ (I seem to have missed the first) at Cromwell House. He sang, a selection of top instrumentalists played, and Emily Muir came in to sing the Noces de Jeannette duet with him. He seems to have closed his season 16 July, singing ‘David Before Saul’ at Store Street.

‘M Léonce Waldeck, a baritone of considerable merit, gave a song from Martha very pleasingly. He has a sympathetic voice of good quality, and sings accurately and with judgment, barring a tendency in forte passages to force his tone into a passionate vibrato’ wrote The Examiner after Lansdowne Cottell’s concert. That passion (and vibrato) would help him to become a favourite of the ladies …

I don’t know whether the Waldecks went home after the London season. The Franco-Prussian war had just exploded into action. Anyway, I see no trace of our ‘baryton martin’ until April of the new year, when he turns up in Dublin, equipped with two songs by Charles Salaman (‘I would tell her’, ‘A Voiceless sigh’) and giving a concert (21 April) at Cramer and Wood’s Rooms.

Back in London, he sang in more public concerts (Silas, Billet, Romano, Mme Celli, Alfred Gilbert, Henri Logé, E Guerini), and doubtless as many private ones, as well as revisiting Dublin (Gounod’s ‘Noel’ and Chanson du printemps, The Scented Vine’ &c) and appearing in London with Salaman as guests with the Dublin Glee and Madrigal Society.

H appears to have stayed over this year, for he turns up at the Albert Hall in December singing with Lemmens-Sherrington and Edward Lloyd in a performance of Carter’s Placida and in February of 1872, he gave a concert with Salaman in Brighton.

London during the war of 1871 proved a grand place for linking up with the high society French, and, during 1872, Waldeck appeared regularly with Juliette Conneau, sometime lady-in-waiting to the Empress Eugénie, as well as with the high society lady who called herself ‘Haydée Abrek’, pianist de Kontski and such associated persons as Jules Lefort, basso Monari and Irish amateur William Maitland. At de Kontski’s concert they performed his opera Les Deux Distraits (11 March 1872). During the season of French plays at St James’s Theatre, Waldeck was engaged to sing between the acts (‘La Romance de Boabdil’). The concert engagements proliferated, ranging from charity dates, to the concerts of such as Wilhelm Ganz and Luigi Arditi (‘Vainement Pharamond’, Joseph).

He also, round this time, got to know the London-based Gounod and his singing girlfriend, Mrs Weldon, and performed with them regularly.  On 7 June 1873, at Tavistock House, together with Mrs Weldon and Werrenrath (another hanger-on of the composer) he took part in the first full performance of the composer’s ‘Biondina’ songs. The curious Mrs Weldon refers to Waldeck (and others) dismissively in her biography, but at the time they were only to happy to use him and his rising fashion. On 28 June 1873 Waldeck (‘an agreeable and accomplished concert singer with a sympathetic baritone voice and a cultivated style’) gave a concert at the Olympic Theatre. Gounod played piano, Mrs Weldon sang, Waldeck sang Gounod music and duetted with the lady. In July, they returned to Paris, where Mons Valdec (as he had no definitively become) was seen again in concert with Mrs Weldon.

It seems that the change of name came along with a change of status. Instead of being a charming amateur (and the word ‘sympathique’ litters his notices) he was now singing professionally.

They only spoke of it. And this ‘incident’ gives us the one (apart from Mrs Weldon) ‘picture’ of Valdec that we have. The writer Henri Maréchal recounts in his memoirs the tale of the abortive Opéra-Comique affair. He describes: ‘Un baryton mondain don’t le succès était alors très vif dans beaucoup de salons parisiens. D’aspect agréable, elégant, doué d’une toute petite voix, prenante par le charme de son timbre, il soupirait avec goût les cantilènes amoureuses à la mode …’, before going on to tell of the singer’s haughty demands (a letter from Jules Barbier reprinted long after give a comical picture of these) and the quick deflation of the idea of casting him on the stage. He also added that the singer was living hand to mouth, and had billeted himself on a rich friend … er.. what about the wife and child?

In the years that followed, Valdec knew his greatest vogue. He appeared again and again at the Salle Érard, the Salon Pleyel and the Salle Herz in concerts of his own (6 May 1874 ssq), and as the frequent guest of others. He made a considerable success with the song ‘La Fauvette’ by Louis Diémer ‘qu'il détaille de la façon la plus intelligente’, ‘remarquablement rendue’, gave new songs by Widor, Clemence de Grandval (including an aria from her Stabat Mater), Faure (‘Le Message’, ‘Alleluia d’amour’), older ones by Gounod (‘Le Vallon’), Schubert (‘Ave Maria’, ‘La Truite’), occasionally touching on the operatic with Le Medecin malgré lui or, a favourite, the Zauberflöte duet. When the Paris season ended he headed to the provinces – Nantes, Le Mans, Limoges, Valenciennes, Arras, Orleans – returning as ever for the high season with more songs with which to delight the fashionables and the critics into reviews such as ‘Valdec a chanté avec son goût accoutumé deux romances délicieuses de M. Magner, qui, lui-même, l'accompagnait … On ne peut dire mieux que M Valdec, et sa voix exquise en fait un des meilleurs chanteurs de salon que nous ayons jamais rencontrés’.

During the season of 1877, Valdec was seen regularly on the Paris platform: for Albert Sowinski, Luisa Valli, Pauline Boutin. Alice Sydney Burvett, Doquin Ardiun, Louis Breitner, Therese Castellan, Léopold Déledique, Mlle Fanchelli and doubtless many others, as well as his own soirée (‘Très remarquable le concert du sympathique baryton Léonce Valdcc qui sait aussi bien dire que chanter. Rappel après chacun de ses morceaux’). He seems to have been a favourite with Mme de Grandval, whose songs he continued to give, and at who concert he appeared singing the composer’s duet ‘Le Forêt’ with her.

In the first months of 1882, Valdec presented a series of eight Parisian matinées, and in June he paid one more visit to London. However, I spot only two professional appearances. 1883 brought a second series of matinees, and an announcement that he was starting a concert and touring agency. It seemed he was running down his career. When he sang for Lebouc in December 1883, the usual review was slightly muted: ‘M Valdec, chargé des intermèdes de chant, a rendu avec succès le charmant air de Suzanne de Paladilhe, et le Départ, scène de Gounod, puis des mélodies de M Albert Renaud qui ont produit bon effet’.

His appearances got less frequent in 1884. His own concert was held not in the old venues but in the Salle Flaxland, he was still paragraphed as ‘le chanteur attitré des salons parisiens’, but it seems to have been more by habit than actuality.

My last sightings of Léonce Valdec are 30 March 1885, giving a concert at the Salle Duprez, and in May the same year singing at the concert given by George Hesse at the Salle Érard. And then … simply no mention. No advertisements. Nothing.

I suppose he died. Sooner rather than later? Was he indeed the one who committed suicide? Or did he simply, as Maréchal says rather indefinitely at the end of his Opéra-Comique tale ‘die in poverty soon after’.  You would have thought some music journalist would have noticed. But I have just these two (contradictory) references … one in 1920 and one in 1933. Half a century after my last real sighting.

Having had entertainers amongst my friends, I learned never to believe all they said. One had at least three names, with driving licences in two of them. Pinocchio had nothing on him in the nose growing department. 🙂