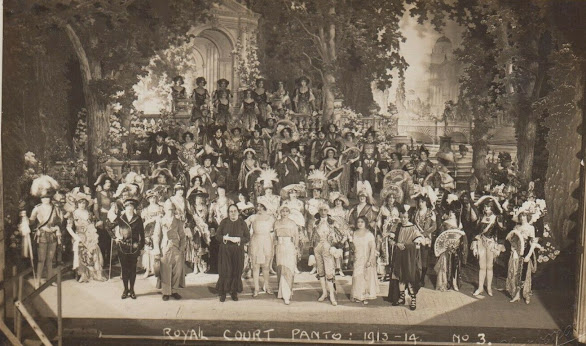 Liverpool. Christmas 1913. Well, I looked for clues, but ... which pantomime story fits that eclectic bunch of costumes? Hungarian headdresses, hussars, Napoleonic hats, a fairy prince in kneebreeches and ... is that a clergyman in the spot I would have expected to find the 'dame' of the affair? And who is the plump lady/principal boy with the curious Egyptian apron?

Well, if you guessed, you know more about pre-war panto than I!  The answer is The House that Jack Built. The fairy prince is Fred Barnes, the plump lady is Jack as played by Gwladys Soman 'of Dillon and Soman', the principal girl is Daisy Yates, and Billy Merson was Sammy. Which? What? So who is the clergyman? Or is it the dame?  Surely ... the principal boy is Jack Durden, and we all know Dame Durden... And who is the gent in the cross-gaiters? and the one in the dressing gown?

Billy Merson [THOMPSON, William Henry] (b Nottingham 29 March 1881; d Charing Cross Hospital 25 June 1947) was the success story in this production. The son of a joiner, 'Nottingham's own' started as a music-hall comedian ('droll songs and quaint patter'), and rose to become a star of the London musical comedy stage (Hardboiled Herman in Rose-Marie).

The rest of the cast knew varied fortunes in careers of different lengths.

[Katie] 'Gwladys' Soman, who had started her career in 1908 as a grisette in George Edwardes Merry Widow tour, became Mrs Robert H Dillon in 1918, after extended rehearsals apparently caused by a previous encumbrance. The couple visited Australia in 1916 with their comedy and pantomime act.

I see Daisy Yates [ELLIS, Ellen Maingay] playing principal boy in Dick Whittington at Dover in 1909, doing impersonations ('comedienne and dancer') at the Hull Hippodrome in 1910, and leading the dances in What Ho! Ragtime in 1913. She also ended up in Australia, during and after the war, where she seems to have made more noise in the law courts than on the stage. She won her divorce suit against Mr Thomas Henry Daniels, and her breach of promise suit against Mr 'Sydney Yates' (ie Culverhouse), but lost when she tried to sue Williamsons for not re-employing her. She stayed Down Under, married Charles 'York Gray', performed in musical comedy and revue through the 1920s .. Daisy Ellen Maingay Gray was still to be seen in Parnell Rd, Remuera in 1981 ... Fred[erick Jester] Barnes (1887-1938) 'light comedian' ('son of a Birmingham butcher' [Thomas W Barnes]) can be seen singing 'The Black Sheep of the Family' at the Nottingham Empire in 1909. 'He sings popular songs in taking style .. good voice'. He made his biggest headline to date when he helped an 'American heiress' with a broken-down car, fell in love, announced the wedding ... but the 'heiress's' parents insisted he leave the stage, so ...  Next he got himself hit on the head by a falling stageweight, then stood in the street selling banknotes for tuppence, raced in his car to put out a fire, tried the banknote trick again, 'Fred Barnes on his experience in prison'  etc .. and finally 'Former Star of the Music Hall' aged 53, found dead in his lodgings at St Ann's Road, Southend. Star? Well, it is a loosely used word ...  and the tales continued: 'Fred Barnes was told he had only six months to live.. tuberculosis ... '. It seems that he got drunk and gassed himself. 'The tragedy of Fred Barnes', 'Triumphs and Tragedies'

Well, one day a programme will turn up .... or the other photos from the set of at least seven ... but I'd still like to know about those costumes ... perhaps out of the theatre's wardrobe?

Posted by GEROLSTEIN at 3:19 PM

I think it is a very understated Dame. Not as outrageous as the more familiar Dames today.