A soubrette plucked from ebay ...

Doodling through ebay with my morning tea, waiting for the next wodge of editor's proofs to come through. There's always something fun to find, if you ar'n't in a hurry ...

Today, I happened upon this pretty lady 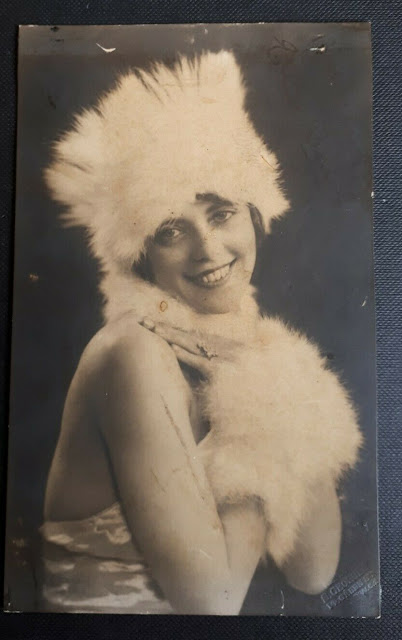 Wonder who she was. Also wonder who her milliner was. That's a very chorine-type costume, yes? Let's turn it over .. ah! 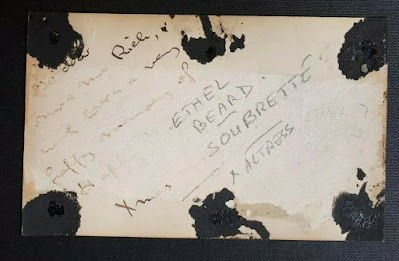 Soubrette, eh? Yes! There she is. 1918. Singing 'Land of Hope and Glory' at a Chelsea victory celebration. 1924: Miss Ethel Beard singing 'Mother England' and 'Under the Moon with you' in Bruce Bairnsfather's Old Bill revue, Ullo. Miss Betty Bright, Miss Ethel Beard and Miss Jean Lister and wow! J T Macmillan and George Mudie. Then, Carry on Sergeant at the Oxford. In 1927, she is touring in the Astaire show Stop Flirting (without the Astaires) for Donald Banks, as Vivian Marsden. Panto at Cardiff ..

She was clearly, by now, a little more than a soubrette, for in 1931 she turns up on the National programme, supported by just a baritone and a pianist in an hour-long concert! What next? My next sighting is in 1932 and she is playing Lucy Lockit in the Austin Beggar's Opera, in 1934 ... good heavens ... Nadina in a touring production of The Chocolate Soldier, which earns her a little para in the provincial press: 'she has played leading parts in nearly every country in the world, not only in England but in French, German and Spanish. One of her greatest triumphs was in India as Carmen with the Carl Rosa Opera Company. In England she created a furore in June's part in Clowns in Clover ..'  The Carl Rosa?  Is it true? Yes, there she is, singing Siebel in Faust in Bombay in 1930. Next sighting, 1935. Signora Vannucci in Romance. 1937. I guess it is she in the cast of 1066 and all That. 1940. Playing on the road in The Corn is Green with Phyllis Neilson-Terry.

Goodness, a fine career ... and there seems to be a lot more! Athough, of course, one mustn't mix this Ethel up with actress who died in 1918, nor with the one who played on the radio in the 1940s. Nor, of course, the potter ..

I think our photo must come from the earlier part of her career ... or is that a Nadina costume?

Posted by GEROLSTEIN at 4:04 PM