.
Occasional vocal music, written and composed to mark a public occasion – be it to celebrate a birth, marriage, death, or victory – only occasionally lasts very far beyond the event being marked. Which never stopped it, especially in the nineteenth century, being churned out professionally and amateurishly, either for an official occasion, or as a bit of bandwagon-jumping. Some second-rate publishers simply dragged a tune from their bottom drawer, stuck some simplistic and floral words to it, decorated it with a pictorial cover and a dedication to whichever duke, duchess, prince, princess or notability was involved and sat back to reap the profits. Others, however, went to respectable musicians and known writers for new works … which is where this wee tale starts. 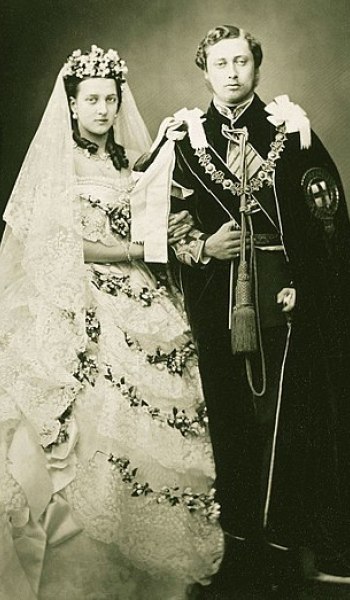 March 1863 marked the marriage of Queen Victoria’s son, Bertie – the future Edward VII – to the Danish princess, Alexandra. It was a royal festival to be made much of, as Britain was still under the cloud of the Prince Consort’s death, two years earlier. And it duly was. And the minstrels, from the Poet Laureate Alfred, Lord Tennyson, with his ‘Sea King’s Daughter from over the sea’, did their bit, right down to country vicars and maiden ladies with rhymes printed in local papers. Miss Hannah R Binfield, daughter of Reading’s musical pasha, composed music to words by Rev W Legg (‘Bride from Norseland’) and it was published by Chappell. The Alhambra mounted a cantata ‘Welcome, England’s Bride’ which as sung nightly by Tom Bartleman, William Parkinson, Miss McGregor and choir pleased well. 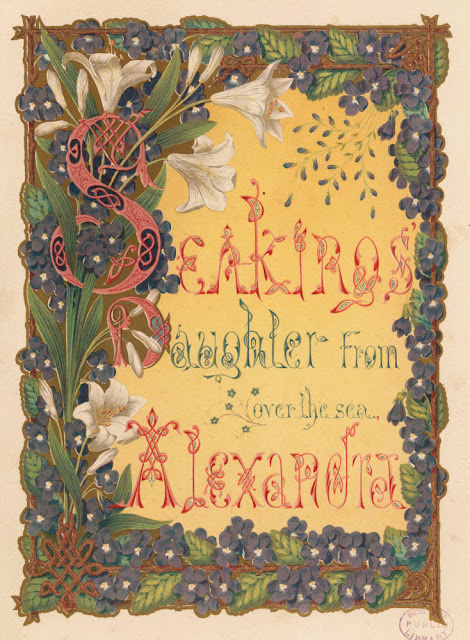 However, the most splendid celebration (apart from the event itself in Windsor), was that mounted at London’s Crystal Palace. Three days of Wedding Fêtes topped on Tuesday 10 March by a ‘Grand Performance in the Central Transept of Music written in celebration of the occasion. ‘Arranged’ would have been more accurate than ‘composed’. Augustus Manns put together a ‘Festival Overture’ the final movement of which was a kiddie choir version of the National Anthem ‘with new and appropriate words’. 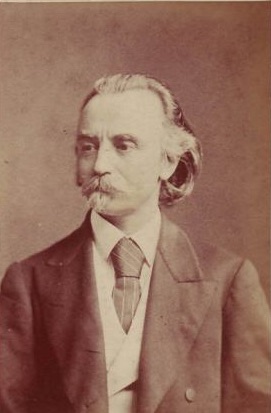 Manns also arranged a set of Danish airs, and topped it all off with singalong arrangements of ‘Rule Britannia’ and ‘God Save the Queen’. But amongst all the arrangements, and the performance of the music being played in church at Windsor, there was an original piece, a ‘Procession March’ by the young Arthur S Sullivan. And for a guinea, you could have a bust of Alexandra with her facsimile autograph on the back from ‘The Crystal Palace Art Union’. The Prince’s one wasn’t ready yet. I wonder if it ever was. 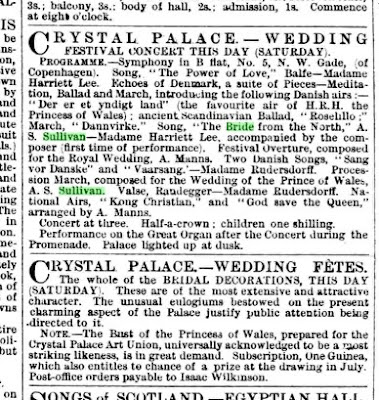 But no-one seemed to care. The Rooms were decorated gorgeously, there were flags, fountains, feathers, fiery torches, and plenty of music, among which Mr Sullivan’s march ‘with its stirring introduction and quaint melodious trios’ formed a well-liked part. So well-liked, indeed, that come the Saturday, it was given again. The Saturday concert repeated Manns’s overture and Danish Songs and Sullivan’s March, but instead of the wedding music Gade’s 5th Symphony was played, Hermine Rudersdorff sang two Danish Songs (and a waltz by her friend Randegger), and to sing Balfe’s ‘Power of Love’ and a new song written by the eternal H F Chorley and composed by Mr Sullivan, Mrs Harriett Lee. The song was titled ‘The Bride from the North’, but (a) who was Mrs Lee and (b) why was she chosen to premiere the wedding song? I mean the great Rudersdorff was there … It’s a bit like having Joan Sutherland on your bill and giving the new song to Katherine Jenkins. 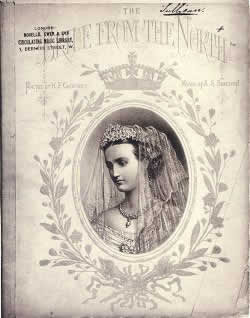 Well, I can answer (a), and if Manns’s correspondence survives perhaps we’ll one day know the answer to (b).

I should say, right away, that Mrs Lee was judged perfectly adequate, but I have no record of her ever singing the song again, and I actually only have notes of two other performances: by the young Euphrosyne Parepa at the Agricultural Hall on 25th March (the critic far preferred her in Ganz’s popular ‘Sing, Birdie, Sing’) and by Ellen Fitton, Wakefield's star singer, at the Lincoln Lay Vicars’ Concert at Lincoln Cathedral, the following month.

I guess Sullivan scholars will know more than I about all this, though Arthur Jacobs devotes but a few lines to the event in his biography, and doesn’t even mention Mrs Lee … so I shall. Then everyone will know who precisely she was ..

For twenty years, the name of the soprano, Mrs Harriette Lee (the extra –te assumed, doubtless, on account of the well-known, if aged, authoress of the same name) was seen regularly on the bills of concerts throughout London and the home provinces. Those concerts were very rarely those of the most fashionable variety, but, on a number of occasions, Mrs Lee shared a bill with the great and the celebrated of the Victorian musical world, and was, apparently, able to hold her unpretentious own.

Mrs Lee was born Harriet Sophia Gregson, in Wimbledon, the daughter of a Bow Street policeman, Thomas Gregson, and his wife Maryanne. However, she lost her father in 1848, and the English census of 1851 shows that the Gregsons had fallen on hard times: mother Maryanne is working as a laundress, eldest sister Mary is plying a dressmaker’s needle, and Harriet herself is a teenaged milliner. However, marriage would soon take Harriet away from a millinery bench. 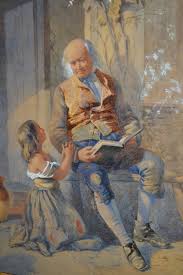 It was only after the birth and babyhood of her children, that Harriet began to look towards a career as a vocalist, and I first spot her on the bills of a London evening on 4 May 1860, when she took part in a concert staged by the Middlesex Volunteers, in which the biggest name of show was that of Miss Poole. Later the same year (30 August) she turns up on a mixed bill of known singers (Rebecca Isaacs, Lucy Leffler, George Tedder, Lewis Thomas) and beginners, at caterer Frederick Strange’s Benefit (‘English songs by English artists’) at the Crystal Palace. She delivered ‘The Beating of my own heart’ for the occasion.

In February of 1861, she made a first appearance at Musard’s concerts at St James’s Hall. Her name was not billed at all and she seems to have been a late addition to the programme, but The Times reported: ‘Allowances made for a first appearance the lady, of whose antecedents we know nothing, who promises to become an acquisition’.

In 1861 I spot her singing at the Barnsbury Institute, in a Masonic Concert with the Misses Poole, Isaacs and Susan Pyne, at Edwin Ransford’s concert at St James’s Hall, at Store Street for the Hullah Fund, and at Brentford as the soprano soloist in Elijah. There were undoubtedly many more engagements of a similar kind as a published list, in the music press of February 1862, signals: 25 February Ipswich, 26th Diss, 27th Bury St Edmunds, 28th Newmarket, 1st March Stowmarket, 3rd St Andrew’s Hall, Norwich, 4th Harleston, 5th Bungay, 6th Lowestoft, 7th Yarmouth…

She also made appearances in the London concert rooms – I notice her singing for Grace Delafield at Myddelton Hall, at the Horns Assembly Rooms, as vocalist in a Mr Myers’ Evening with Tom Moore, and at the series of 1862-3 winter concerts at the Hanover Square Rooms, where she gave Chalmers Masters’ ‘I Shall be Queen of the roses’ from his operetta The Rose of Salency. Later in 1863 she took the soprano part in a staged version of the operetta at the same venue.

She appeared at the Crystal Palace (14 March 1863) with Mme Rudersdorff at the Prince of Wales’s Wedding Festival Concert, giving the first performance of Sullivan’s ‘The Bride from the North’, ‘The Power of Love’ and Hatton’s ‘Fair Maid of Denmark’ (encored); alongside Parepa and Santley in the Royal Society of Musicians Benefit (‘The Beating of my own heart’ ‘sweetly sung’), with the Vocal Association, the Pianoforte Quartet Association (with Florence Lancia), at Society for the Encouragement of Fine Arts (with Lancia and Mathilde Enequist) and, in 1864, she was given a place on the bill at several of Howard Glover’s monster concerts (‘Auld Robin Grey’). However, most of her engagements-- and there were plenty-- were further afield, and when she went to Ipswich in 1865 (October) she was billed as ‘of the nobilities’ concerts and Exeter Hall’.

Through the 1860s and the 1870s, Mrs Harriette Lee was kept fairly regularly before the London and provincial public, coming out on the London platform for such dates as Ellen Bliss’s Hanover Square Rooms Concert of 27 February 1866, at the Guildhall Concerts, various Fancy Bazaars, Benefits and City Dinners, illustrating the ‘National Melodies of Ireland’, on the programmes of harpist T H Wright, at Lizzie Wilson’s and Augusta Manning’s concerts (‘Peacefully slumber’) at St George’s Hall (‘Name the glad day’) and at Langham Hall. On 7 July 1879, she mounted her own soirée at 28 Golden Square at which Jose Sherrington, Agnes Larkcom, Grace Damian, D’Arcy Ferris and Herbert Thorndike made up the programme. 1880 seems, however, to have been the end of her career, and my last sighting of Mrs Harriette Lee as a vocalist is at the Dramatic, Musical and Equestrian Fund concert of that year (11 February).

If Mrs Lee made a modest musical career, however, some of her descendants would leave rather a greater mark on artistic history. Daughter Harriette Jessie (d Marylebone 24 April 1890) married Henry Dunkin Shepard, an architect and gave birth to three children. Son Ernest Howard Shepard (b St John’s Wood, 10 December 1879; d Lodsworth, 24 March 1976) would become ‘perhaps the best-loved illustrator of children’s books since Sir John Teniel’, most famously as the illustrator of Winnie the Pooh. 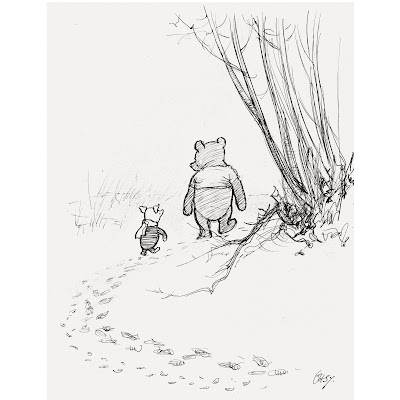 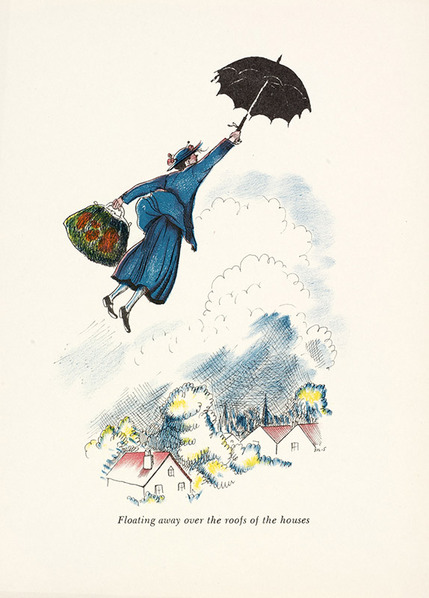 Posted by GEROLSTEIN at 7:01 PM