.
A combination of circumstances led me, a year or three ago, to a little coven of enthusiasts fascinated by the works of American composer Willie Fullerton. Which had led, of course, to an interest in his partner, designer, Percy Anderson, which led, in its turn, to an interest in their whole little group of gay theatrical men who flourished in the world of the turn-of-the-century musical theatre – Henry Hamilton, Paul Potter and, it seems … Hayden Coffin. Well, it’s not the first time that a masculine sex-symbol has been gay. Or, at least, helped them out when they were busy. And, by the company he kept, he didn’t seem to mind who knew it, although nothing was hinted in the press. To his armies of adoring female fans, ‘Tottie’ Coffin was Hugh Jackman all rolled into one. And his rather bland autobiography certainly had nothing of the salacious, or even colourful or insightful, to it. So I dug no further. Charlie, with his large, rawboned wife, and his gay circle of friends was, for what it mattered, surely homosexual to some degree.

But guess what? Today a got a surprising missive from Colin Perry, one of the best historical delvers and stitchers I know. To wit:

"Charles Hayden Coffin. CHC. Charlie. Tottie, to those in the know. Late 19th-century and early 20th-century heart-throb baritone. Born 1862, Manchester, to American parents, died 1935 Kensington, London. Married divorcee Adeline Maria Elizabeth de Leuw Randegger (actress, silent films) in Hamilton, Ohio in 1892. A late marriage, and they are rarely mentioned together… a convenient marriage? Well, people have drawn their own conclusions for a long time. There is copious information on his career, and he had, it seems, a good reputation for nurturing upcoming talent. Not much else to add. A quick look at his Wikipedia page – needs a lot of work to do him justice. Click on its Talk page to see if anyone is taking an interest…

What? A long detailed missive from his ... what? His grandson! He is offering evidence for the existence of a mistress, and illegitimate children, which is peremptorily dismissed by an editor. This MUST be worth following up! Gael Hayden Guthrie Lewis – well it is not a common name. He’s a company director so we have an address. I write – just in time notice a recent change of address, and the letter edited is finally, posted. Radio silence for a couple of weeks. Then a phone call – Gael has been in France! A torrent of emails and a cornucopia of evidence. A few weeks of cross-referencing information, building a cogent story from the newspaper archives, adding some family context on Ancestry. Now the story can be told.

Best to start squarely in the middle of the timescale with the incontrovertible evidence. A male child named Errol Blanchard Hayden Christie has his birth registered on 27 November 1918. Mother Mamie Christie of independent means, father named as Charles Hayden Coffin, an actor and singer. Aah, what’s to stop any wannabee single mother naming a celeb as the father? But the birth (11 October 1918) has been registered by both mum and dad! Charlie IS the father! That settled, it’s a bit of an anti-climax to just slot in all the other info. Gael’s mother, Crystal Hayden Christie, was born 12th September 1914. Mamie was coy – the father was named as a John Christie, a civil engineer. Her maiden name was given as Jefferson. Lest there be any doubt, we have a letter written, 21st April 1915, by Charlie’s elder brother, Walter: “My dear Mamie, I thank you for your charmingly kind note, and for the little glimpse yesterday of an earthly paradise. You have made dear old Charlie happy at last, and will have a great reward. The perfectly delightful little daughter we may hope should link us all up in a greater love. She may bring us some message of our beloved mother [Sarah Powell Coffin had died 21 February 1913] – I say our mother, as she is now yours. We both know she was fond of you, and I pray for her blessings.”

Mamie E. Christie, in the UK just-pre-war ‘1939 Register’, records her date of birth as 12th February 1877 (so her two children were born just either side of her 40th year of age). She was in fact born as Maud Ella Cohn, to Herrmann Cohn, a naturalised German ‘Australian merchant’, and Anita, daughter of medical Dr Maurice Davis, both wealthy Jewish dynastic families. Her brother was Jefferson Davis Cohn, a very successful businessman and horse breeder. A maternal uncle was none other than the celebrated Sir George Lewis, solicitor to the mighty. So she was a wealthy society girl. She seemed to violently dislike her first name of Maud so was soon instead ‘Mamie’. She sometimes adopted Jefferson as her surname too. The surname of Christie was religiously adhered to after the birth of her daughter in 1914. She had been an ardent amateur, even semi-professional, actress with appearances studded in the Stage. She was also an accomplished pianist – Crystal said she trained at the Paris Conservatoire. But at some point she caught something that left her profoundly deaf. It never held her back – she could lip read very well – and Gael remembers her holding court to hosts of foppish men in felt hats well into her seventies and eighties until she died 26th October 1966. So, backtracking, we first find her, in playbills preserved by the family, in the late 1880s playing Little Red Riding Hood and Beauty [alongside the Beast] in productions written by her grandfather, Dr Maurice Davis, accompanied by the children of such theatrical luminaries as George Edwardes and the Lovedays, and stage managed by the actress Alexes Leighton. In the papers, by 1891-92 she is ‘a child elocutionist of much promise’, doing benefit performances for hospitals and churches, followed by a touch of professional work in 1894, playing a Pastoral and one of Chopin’s valses on the piano ‘with a careful if not powerful touch’ for minor actress and promoter Lilla Norden. Just to remind ourselves she was primarily a society girl, it was off to the Windsor Ball with brother Jefferson in 1898. A hospital fundraiser playing ‘a dainty little Daisy Brent’ in Edwardes’s The Shop Girl in 1901. Next year, another benefit, acting in an original one-act comedy entitled ‘We Three’, a first work by Eric C Scott (son of Clement, no less!) and a starring role. 1903 and a high quality amateur part as Lucy Lorimer in Sydney Grundy’s hit comedy A Pair of Spectacles– alas not on the London Stage but for the London Rifle Brigade Musical Society, albeit with glowing reviews. She is moving in the right theatrical circles. 1910 sees her sending a wreath to the funeral of H J Loveday, so long stage director to Sir Henry Irving, brother to G B Loveday of operatic management renown, and, so, also brother in law to the wonderful Annie Tremaine/Madame Amadi.

Now she is getting close to Charlie Hayden Coffin. So, it is now time - what do we have now when we peer into our new family heirloom treasure chest? The fly sheet from the family bible in two hands separated by half a century: ‘To my beloved Crystal, x 1914, from Charles Hayden Coffin who received it from his dear Papa on his first birthday anniversary April 22nd 1863, London’. A 1919 letter from Charlie to his daughter: “Sweet Crystal. I was glad to get your letter and the drawing of Bowen. I shall soon be home now. Please tell Mummie to get my room ready for Sunday or Monday.” A letter from Mamie’s solicitor, dated May 1928, explaining to her that changing her name by deed poll to Christie could be done ‘silently’ so as not to alert Errol’s school that she was still, legally, Maud Ella Cohn. A photograph that must have been taken (by Mamie?) around 1928, still pasted in the family photo album (and annotated by Crystal), that shows a doting dad with his two children – Errol in school uniform aged about 10, Crystal, now looking very grown up aged about 14, and Charlie, therefore in his mid-sixties. This was no mere fleeting dalliance! And a quick dip back into the newspapers gives us the first image of Mamie, presenting the Bartlett Cup for fencing (sabre) to G. R d’A Hosking in April 1940. (both Crystal and Errol were champion fencers). And another photo a year later shows her presenting a cup for the junior foils. "And finally, a letter to the Radio Times of July 22, 1938 written by Crystal “As I am the daughter of the late Hayden Coffin…” – perhaps the relationship between Charlie and Mamie was more widely known at the time than we imagined…" 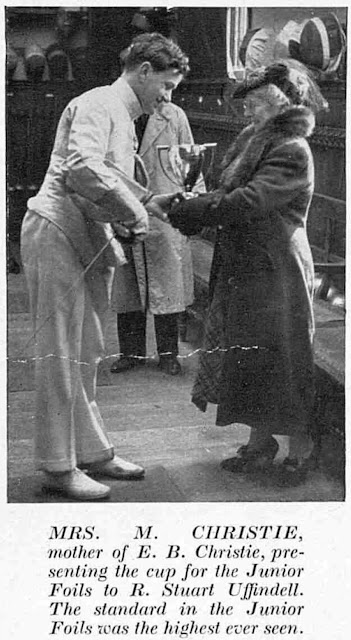 I can’t change my Encyclopaedia of the Musical Theatre: it's printed, published and reprinted and republished, and anyway it doesn’t really deal with the singer’s sex-life. But you know my mania for facts and ‘getting it right’. And I really love it when someone such as Colin, with the same devotion to facts and truth, as opposed to myths, comes along. Three cheers for Tottie Coffin, baritone superstar, and all he sailed in. 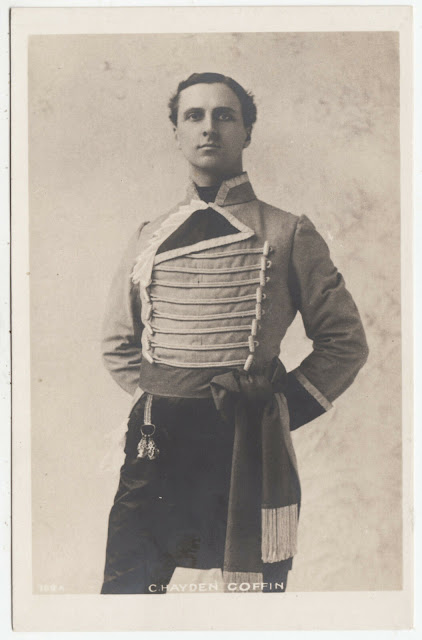