IVOR AND I: THE DANCING YEARS

.
Any week now, John Yap’s company, JAY Records, is going to release a recording of Ivor Novello and Christopher Hassall’s musical spectacular, The Dancing Years. And not just any old recording. A complete double-CD of the entire music – interludes, dance-music, choruses, the lot. Why am I writing about this before the event. Well, I can’t really do it after the event, because there’s a little bit of me in there, and I have heard the recordings way before the event. 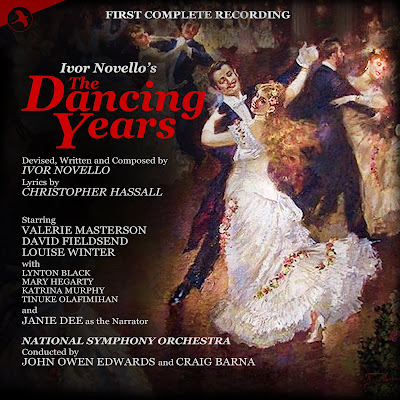 The Dancing Years and I go back a long way. When I was a teenaged basso in Christchurch, NZ, powering out Daland’s Aria and the Death of Boris,‘Three Fine Ships’ and the Dvorak Biblical Songs to piano accompaniment on the local airwaves, I took part in the odd stage show. Only the odd one, for University Latin and Greek had to come first. I had little or no knowledge of ‘show music’, apart from G&S, so such events as plump Audrea Beddie’s deliciously coy rendition of ‘Moonstruck’ and Natalie Brittenden’s tremulous soprano versions of Novello -- Clara Novello? Vincent Novello? -- were an eye-opener. Then when I was co-opted for the concert of a rival group, across town, for a kind of Nelson and Jeannette spot, with a lady from London (wow!) named Gillian, we were given what I seem to recall as being a duet arrangement of ‘Waltz of my Heart’ …

Well, I wasn’t going to sing much Novello over the years that followed. Ivor Novello clearly had a aversion to the bass or baritone voice (possibly because he didn’t have one … other musical writers, today, suffer the same inability to write for a low voice) and his scores, thus, included nothing that could interest me. Back to Verdi and Wagner, and on to light and show music of a more beautifully bass-baritonic kind.

It was a decade down the track, when I had renounced performing for writing, that I bumped into Ivor again, and much more thoroughly. Because, of course, he and his shows feature largely in volume two of my British Musical Theatre. They sounded like good colourful entertainment. So, I read them, played them. Yes, the dialogue was a bit … er … twee … thirty or forty years on, but the music, as sung on record by Bronhill, Hill-Smith et al, was lush and lovely. And when my friend, the soprano Diana Martin, starred in a revival of Perchance to Dream alongside Simon Ward, I had a chance to see a Novello work in an, admittedly less than Drury Lane-sized, production. As a period piece, it worked fine.
Flashback. When I had begun writing, in the 1960s, I had started with plays. One-acters for the British Drama League. Elektra was the first and best. The Women of Troy (yes, I was still in my Latin/Greek stage) won second prize and was published. But then I was off to London, to become the new 9-stone Gottlob Frick. Needless to say, I didn’t. And after a few years enjoying myself singing ‘Was I wazir’, Danilo in The Merry Widow and ‘Once Nearly was mine’ round the world’s oceans, I met Ian, and settled down to a long, long ‘married’ life.

Doing…? Write, said he firmly. So, I wrote. Plays. I still have some: Anyone for Armageddon, which actually got to casting stage with Duncan Wheldon, The Red, White and Blue Brigade, and even a Palladium panto, The Black Crook, for Louis Michaels (‘but it’s not Aladdin or Cinderella!’). I even adapted a couple of Ngaio Marsh mysteries. And there was an Arthur Schwartz musical for Dora Bryan. And a remake of Coward’s Pacific 1860 for Joan Sutherland. But none of them saw the light of a professional stage. Shame. They were/are good. But perhaps now rather old-fashioned. I mean, the aristocrats and right-wingers in the original plays are the GOODIES! Desperately unfash in 2018. 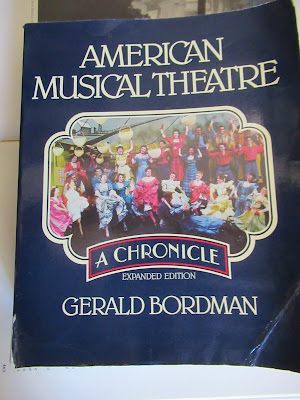 Then, one evening, Ian came home, from a trip to New York, with Gerry Bordman’s American Musical Theatre under his arm, and the rest is history. I didn’t become a playwright, I became an historian. 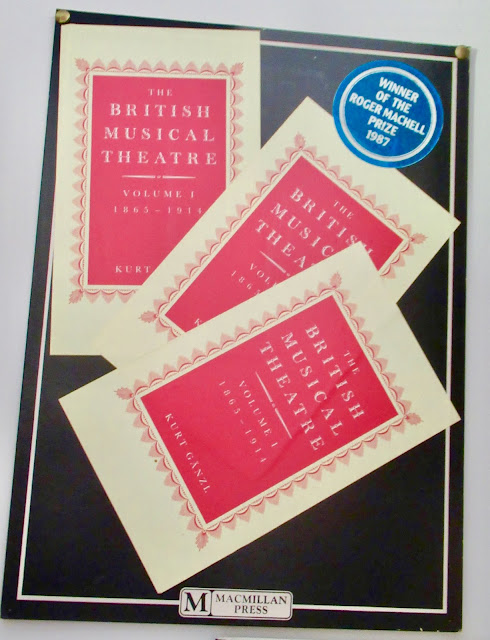 Now when my British Musical Theatre came out, with rather resounding results, some odd things happened. I was invited to speak on radio and on television, I was invited to write all sorts of other books, and blow me down, I was invited to work on the libretti of a couple of musicals. One was an American piece about, if I remember Abelard and Eloise, whose author-composer had recorded his curious and derivative score, in the fashion of the day, on vinyl. It was all right. I forget its name. Anyway, if the music was harmless, the text was .. um .. in need of mending. Rewriting. So I remodelled and rewrote (I’m good at that) and returned the script. Apparently the American was not at all happy! He didn't want ANYTHING changed. The project was abandoned.

But the same management had taken up the rights to The Dancing Years, which had been left in Ivor's will to the young son of producer, Tom Arnold. The book was proven and competent, not like the other piece, but --- the central plot premise was a horror and the language, well, twee. So, a second time, I went to work. The result was excellent. I liked it, Ian liked it, the producers liked it … but Mrs Arnold senior didn’t like it. Too much of Ivor’s text was changed. Well, of course it was. It needed to be. People didn’t SPEAK like that any more! I rewrote, but she was adamant. It all collapsed. I hope she gave the producers their option money back. They really had done well by the piece.

So, I had spent some months of my life (re)thinking and (re)writing The Dancing Years. And recently, I found the printed-up text the producers prepared. I think it is the revised version. And, oh dear, two CF-2 floppy discs --- one of each version – I say, if listening to John’s outstanding recording prompts anyone to think of producing the piece, and if Maxell discs can be revived … do give a chance to a now elderly gent who didn’t become a playwright or a librettist, thanks to this almost-final set-back, but who still made his life and career writing about, rather than for, the theatre! 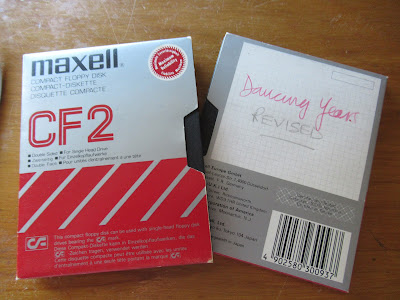 PS: I forgot to tell you my connection with this recording. I have been writing sleeve notes, off and on, for John, for what we will simply call ‘a very long time’. I think Pacific 1860 was the first. Well, here I am again (who else?), decades down the line, with the booklet for The Dancing Years. However, John also, with the goal of completeness, wanted to link the musical numbers on the thread of the show's story. Wisely eschewing the original dialogue, he had me write a slim narration to do the job. I curbed my prolix tendencies and … here it is! I never got to sing with Valerie Masterson, but at least I’m sharing a recording with her.