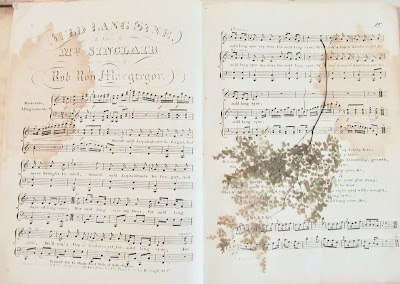 ‘Auld lang syne’ is somehow one of those songs that you don’t think of anybody actually writing. But, if pressed, folk are inclined to attribute it to the buzzword Scot of the eighteenth century, Robert Burns. They’d be half right. The version of the song that has become a New Year’s Eve classic chorus was arranged by Burns, who never pretended that it was anything else but a version of a much older song, and he registered it as such in 1788. 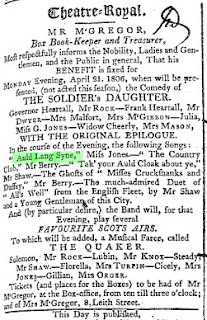 I see it sung in concert in Edinburgh in 1806 by a Miss G Jones, and in 1807 by Mrs Kemble and, in 1813, an arrangement for four voices was sung at the London Vocal Concerts by Mr and Mrs Vaughan, William Knyvett and J B Sale. In the same year, Penson, Robertson & Co published ‘Auld Lang Syne, with the additions, as sung with unbounded applause at the Theatre Royal, Edinburgh by Mr Sinclair’. I wonder what the additions were. 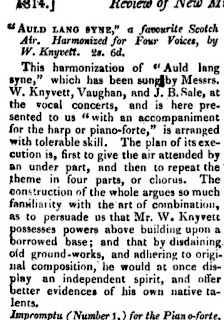 In 1813, Sinclair, ‘the only Caledonian melodist on the British stage’ was already a fixture at the Theatre Royal, Covent Garden, and he gave such national songs as ‘Scots wha hae’ ‘Roy’s Wife of Aldivalloch’ at Benefit concerts alongside the inevitable ‘Pray goody’, ‘The Death of Abercrombie’. ‘The Death of Nelson’ and the ilk. In 1816 I see he gave them ‘Auld lang syne’. He would sing it many, many times more, on that same stage.

In 1817, Walter Scott published his novel Rob Roy, his version of the tale of a Scots murderer, rapist and thief, alias Campbell, whose deeds ‘protected by several great men to whom he was useful’ had become the stuff of sweetened-up heroic legend. 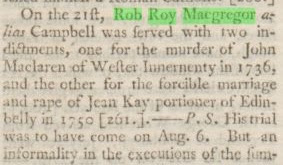 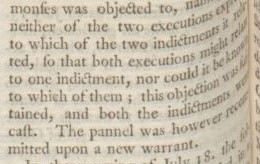 The theatres were close behind where Scott led, and less than three months later (12 March 1818) Isaac Pocock’s dramatized version of Rob Roy MacGregor opened at Covent Garden. I imagine that the fact of having Sinclair and his songs on the staff may have had something to do with the drama becoming a musical drama (which some critics objected to). 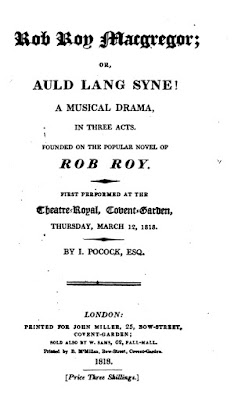 The Devon composer John Davy had composed, selected and arranged a score, largely from popular Scottish songs, and principally for the characters of Francis Osbaldistone (Sinclair, tenor), who was actually the main character of the story, and his sweetheart Diana Vernon (Kitty Stephens, soprano). Among them were ‘My love is like the red, red rose’, ‘Scots wha hae’, ‘A Highland lad my love was born’ (also included in this volume), ‘Roy’s Wife of Aldivalloch’ and, most prominently, ‘Auld lang syne’ which did duty as a title-song, for the play of Rob Roy was subtitled ‘or Auld Lang Syne’. Mr Macready, in the role of MacGregor did not sing. Apart from the two stars, only Taylor as Major Galbraith had a song: a version of Wordsworth’s ‘A famous man was Robin Hood’.

Rob Roy went on to become a staple of the British stage. Other versions quickly sprouted – George Soane’s was hastened on to the stage at Drury Lane while the Pocock play was still at Covent Garden – but it was the Garden’s one which proved to have the staying power. And stay it did, doing its bit to ensure that ‘Auld lang syne’ was sung in multiple productions, all round the English speaking world, for a century, eventually proving a popular warhorse in which slightly clapped-out star tenors could give what was a virtual recital of Scots songs.

But ‘Auld lang syne’ is the one which became an institution.

Posted by GEROLSTEIN at 2:35 PM