A musical mystery ... or fraud. 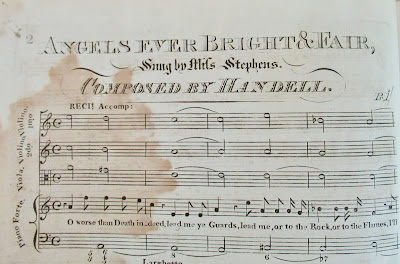 I am a little worried about the musical knowledge of some of those involved in the music publishing game of the times ... the other day it was Mozzart … or is there a trick involved? Is the misspelling intentional ..?

And these two. The Portuguese and the Sicilian. In Latin. Though we know them today as ‘O Come all ye faithful’ (which it is posited was written by a King of Portugal) and ‘Lord Dismiss us with thy blessing’.

But the next one is more than a trick. It is a puzzle. Or a fraud. It is all very well attributing an ancient melody to a Lusitanian monarch, but what do you do when a contemporary song is said to have been written and/or composed by a number of different people? 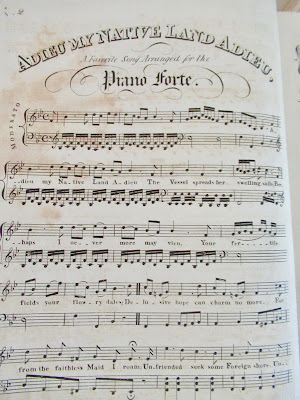 Well, it was a sentiment and an expression used often enough in song and story at the turn of the 18th century, most famously by Lord Byron in Childe Harold (1812). But this song was in existence a number of years prior to that. My copy is no help. It has no date, no writer’s nor composer’s name. Just the probably pirated music and words. But there seem to be a good few copies of this melody combined with these words, put out by various publishers, in libraries on both sides of the Atlantic. Some, like mine, have no author’s name. The earliest advertisement I have found for the piece is 1804. ‘New songs, sung at Vauxhall Gardens, Theatres and other places of amusement’. The Bodleian catalogue includes an uncredited copy which is recorded as dated 1797.

Well, putting aside those American editions dubiously credited to folk such as C K Moran, of whom I have never heard, and a Scots one rechristened Farewell to Albion’s Heather Hills, we come down to two probable claimants to the words and music of what was undoubtedly a reasonably popular song. One is John Westbrooke Chandler, Esq, the other is ‘the author of ‘Over the mountain and over the moor’’.

This latter piece, officially entitled ‘The Beggar Girl’ was an ultra-sentimental little ballad, of which a trio version ‘sung by Mrs Bland, Miss Tyrer and Mr Sedgewick in the new pantomime Love and Magic or Harlequin’s Holiday … at Drury Lane’ (1802) was the work of one H Piercy (sic) of no5 Windmill Street, from where self-published, autographed copies signed in green ink could be purchased. Mr Piercy was a small time musician and teacher (‘piano, harp and singing taught at schools of respectability’) who published one or two other pieces under his own name, but his ‘Adieu’ apparently (I have not seen a copy) appeared just credited to the writer of ‘The Beggar Girl’. 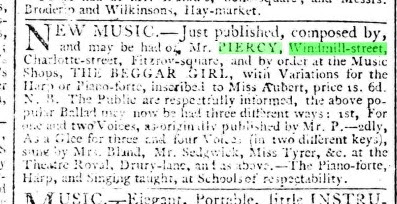 Mr Chandler was an altogether more colourful character. He even got in to the Dictionary of National Biography. But his history is full of holes and contradictions. The DNB tells us he was the illegitimate son of the second Earl of Warwick (but not who his mother was), made his name as a painter and died in an Edinburgh insane asylum before the age of thirty. Well, the painter bit was true, and is the reason that he has been potted for dictionaries. But Mr Chandler, as well as being seemingly depressive and somewhat deranged, is also undocumented. His birth date (understandably) and death date (understandably) are given widely differently, and the only obituary I can find for him – in the Athenaeum of 1807 – says he was 45 at his death. In Stafford. And that means his alleged father would have been a teenaged university student at his birth. 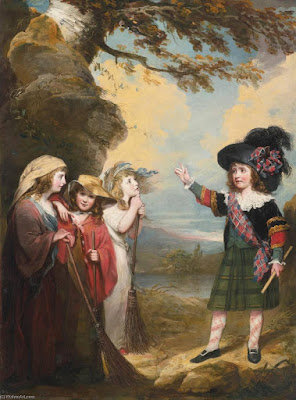 So, words and music for a song? Perfectly possible. Mr Chandler, when not painting, not only wrote a vast piece of heroic poetry, Sir Hubert, but also tinkled. But how strange to write one extremely popular song, and never again? Still, most copies of ‘Adieu’ bear the legend ‘written and composed by J Westbrooke Chandler’. Some affirm ‘sung by Mr Lee at Drury Lane’. Mrs Mountain and Dignum also get mentioned … Mr Lee? Which Mr Lee? You see what I mean about a puzzle. 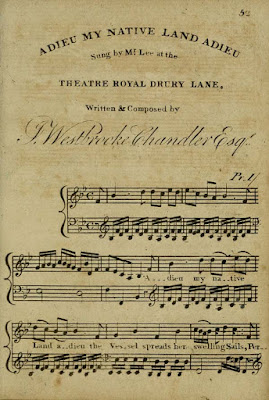 So, did Piercy or Chandler write our song? Or neither of them? Or were they the same person? I think not. Because in 1802-3 Piercy is at Windmill Street with his green ink, and Chandler is allegedly in Scotland painting the local aristocracy. But American academia throws a spanner in the works. Mr T L Philbrick attributes a woodcut entitled ‘The Beggar Girl’, published in York of all places, to Chandler. It is decorated with the verse ‘Over the Mountain and over the moor’, which we know was the work of … Mr Piercy!

Posted by GEROLSTEIN at 8:13 PM