What a week! They even put on a Winter Olympic Games to celebrate my 72nd birthday … a day highlighted by a bottle of my favourite whisky and a bread-and-butter pudding from Wendy, and a wonderful video of greetings made by my dearest friends in Berlin … and even the horses did their bit!

Over in Sydney, little Zaffirina (of whom we own one hoof) had her first start of the season. It was at Goulburn, in a field of eleven, over 1200 metres, and for goodness’ sake Zaffi was a warm favourite! 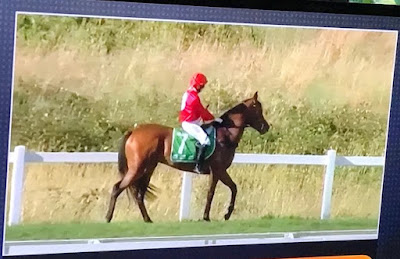 She almost delivered. Back to last at the start (as is her wont) she rattled home down the extreme outside at a rate of knots … the commentator thought she had got up, but alas not quite. Beaten a nostril! Never mind, we’ve obviously got a nice filly, and she’s still eligible for maiden races! 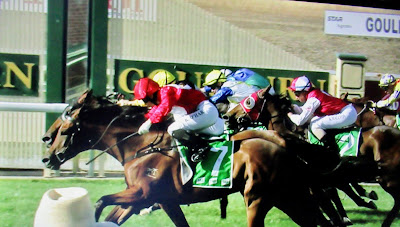 Five days later, it was the turn of Mister B otherwise Dynamite Paul. Since his surprise qualifying effort at only second time on a race course, he’s had a wee rest, and this was his first workout of the campaign which will lead him to his debut in the real races. It was to be er … eventful. Murray was doing quick turn-arounds, as he had horses in most heats. So having won the trot heat with Chivasion he zoomed back home (opposite the race course) to leap into the cart of Mister B, only to find chaos. Mister B had thrown a wobbler, broken his gear, shed a shoe … why? Flies. Motukarara is a festival of flies. Hateful itchy tickly things. The poor waiting horse had finally had enough of them, and lashed out, caught a hoof in a hopple and just about turned his sulky over. So while the rest of the field warmed up, Wendy and I, up in the stand, knowing none of this, worriedly waited as Murray whanged on a new shoe … and finally appeared over the horizon. No time for a warm up. But he got one. 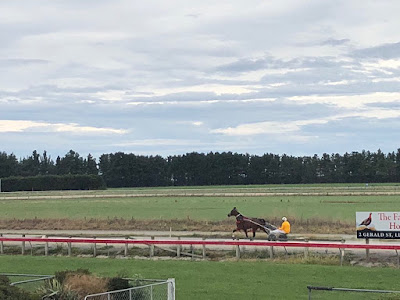 The inside horse was not liking his work. He reared up, and finally after the starter said ‘go’, and Mister B got away splendidly, a false start was called. Damn. Could he do it twice? Anyway he snuck in a quick lap’s warm up and then they lined up once more. Go! And he is safely away again! Murray dropped him in behind the leaders, in fourth place as they paced along at a good but not extravagant rate for two rounds  .. on the last round, Murray pulled him out, and in the straight it was no contest. Mister B cruised past the skipaway leader and away to pass the post 4 lengths clear of the field. (Sorry, no pic, as always at Mot. The finish is obscured by advertising).

Well, one more ‘rehearsal’ and it will probably be race day. I will see our feller in a real race before I set off for the Winter Palace at Yamba, and I think that – barring accidents – he won’t be finishing last! 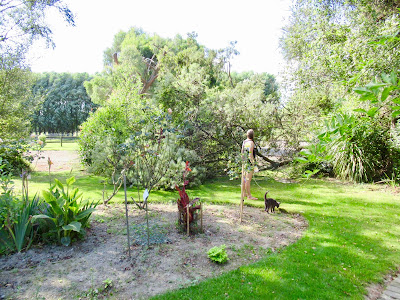 PS Just to keep our feet on the ground, the day finished with a very large tree in the garden deciding to commit hara kiri ….