Tonight, to the Grüner Salon of the Volksbühne, for my latest bit of multi-coloured Berlin entertainment.
And another splendid evening.
Actually after Felix Bloch Erben’s lavish and lovely riverside party yesterday, I thought I wouldn’t be saying ‘Viva il vino’ for a few hungover days: but….
Tonight, my date was with ‘Riccardo Vino and the Technicolors’.
Sounds odd doesn’t it. I’ve no idea why the 6-part band are Technicolors (especially as they were all dressed in unrelieved black), but what’s in a name?

The Grüner Salon was the ideal place for this programme. A slightly tatty 1930s 200-seater salle, decked out with green everythings, a jolly good bar (nooooo!), an excellent sound system, glitter balls, lovely waitresses … took me back to the Blackpool of my young days. 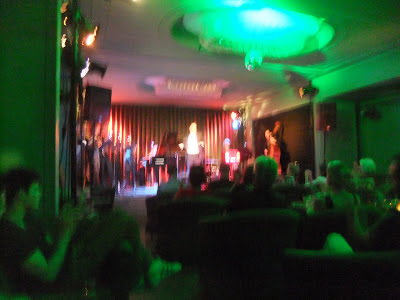 The programme. Il Signor Vino is a handsome, dapper, clever Italian man-boy (age? somewhere between teenage and middleage!) with a very attractive and unpretentious singing voice (no vibrato!) and a definitely appealing style.
He chatted (in German, and a little too much) and sang (in Italian and English, and not enough) to the music of his excellent band through an interesting musical evening, with, as always, some highs and lows. We had everything from ‘Arrivederci Roma’ to ‘By a Waterfall’, to a particularly good version of ‘The Trolley Song’, via some much more novel, tasty and tuneful stuff from the Italian back catalogue.

Let me say right away, it was a thoroughly enjoyable evening. The ‘act’ – which was in the way of being a first-time showcase – has a very definite potential. But at the moment it doesn’t quite know where it’s going. The first half I found delightful: grand 1930s-ish songs, sung with a perfect command of the manner, and with stylish little touches and movements that made me think of the wonderful French (I don’t know the Italians) chanteurs de charme of the years between the wars.
But the second half wandered off into a (well-done) imitation of a 50s pop singer and a rather unpleasant song about American whisky (?!!!) and rock’n’roll … and all the work done, so successfully, to establish the personnage of the charming Italian light-comedy-leading-man in part one went down the drain. We were into il signor Vino doing his cabaret act.
Is that what the show is supposed to be? If so, shame. Because the Riccardo of part one was what I wanted to see. He was delicious. Let him sing about ‘primavera’ and ‘amore’ and leave the Americano stuff to the folk who aren’t gifted as he is. 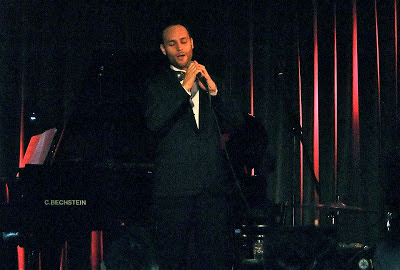 OK. I have to mention the name. Max Raabe. Whom I love. Riccardo could undoubtedly become an Italian Raabe. He has a better voice, potentially equal style ... but he doesn’t have – as yet – the experience, the confidence, the consistency of Raabe. It’s in there, but he needs a director, a …. well, he probably needs me. As I was.

Il Signor Vino is a work in progress. If he gets the right help, I am sure he will progress fast. And make himself a name. If I were still an agent, I’d take him on: and shackle him securely to the 20s and 30s repertoire …

But, I’m not, so, in the meantime, I’ll just watch and wait … and say, good luck Riccardo, your future is really in your own hands…
Posted by GEROLSTEIN at 4:08 PM