A Voyage to Vienna

It’s halfway through June … nearly the longest/shortest day (depending which hemisphere you are in) … and I have been two months back in Europe. Two months during which my activities have been decidedly ‘cultural’: opera, shows, concerts … and the good old blog, which used to chronicle my gallivants to colourful, far off places, has changed its character somewhat.


Of course, that’s because the new (old) Kurt can’t quite gallivant as before. But, with a little help, I can do very nicely, thank you. And this week, with the help and the strong right arm of my pal, Paul, I took my first trip back to Vienna for many, many years.

Where to stay? I looked up my dear little Pension Quisisana of years ago. Announcement. The old Qusisana is gone, replaced by a dashing new boutique… oh .. click … now, what was the other nice, wee place, I forget ... ah, well ... twenty years ago Le Meridien was dashing and new. It’s perfectly placed for walking about … go for the Meridien. Goodness! I rarely stay in big hotels: aren’t they expensive? That’s NOT expensive?

Our room at the Meridien was nice. Wonderful bathroom, comfy beds, unnecessarily complex wifi (when will hotels realise that free and easy-to-operate wifi is much more of a must than a TV set?), nice clean nineties décor, splendid staff … especially the lad who called us a cab and Doreen (!) at the desk…

Time for a wash and brush-down, and then a stroll to the Raimundtheater. Paul’s first glimpse at Wien. I, of course, know my father’s Geburtsort well. Ummm.
Why do I always go diametrically in the wrong direction?
The Meridien used to be on the upstage side of the Ring. It didn’t? Sigh.
Right. Find the Theater an der Wien .. ah! down the Linkzeile .. memories of the fleamarket in the 1980s … searching with Ian for European show-records …
Hmmm. I’d forgotten the Raimundtheater was in the suburbs. Probably because I’ve never been there. Just written about it. The Volksoper and the Theater an der Wien were my old haunts. 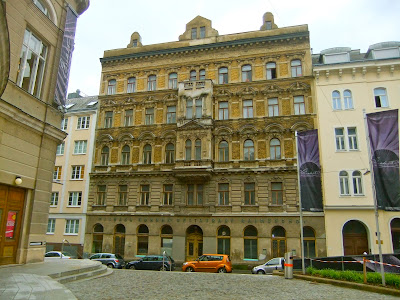 The lower Gumpendorfer is not the loveliest area of Wien, although some once proud buildings live there …. 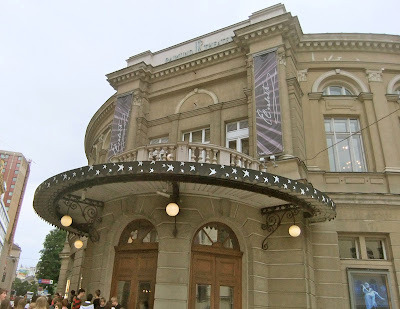 and Herr Raimund gave his name to a rather stolid looking theatre, which looked rather unbecoming on a grey and drizzly night  … but all was well. 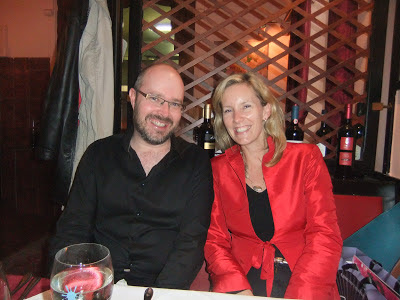 Our friend Sandra had a delicious resto sorted, where we three dined on excellent Spargel and salmon. And then … of course, it doesn’t matter what a theatre is like outside. Its what is inside that counts. And what was inside was a treat. 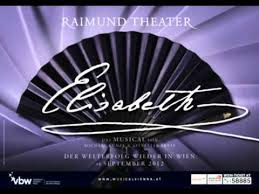 We had a magnificent evening in the musical theatre (see previous blog), and since the theatre had had the wonderfully useful idea of a 6.30 curtain up, we were able to reach our fin de soirée Bloody Mary (me) and Margarita (Paul) in the hotel bar – exploring for our preferred sort of Beisl or Stube starts tomorrow! – and sink into those nice white beds at a sensible hour.

Tomorrow, we (re)make acquaintance with the beauties of Vienna

Posted by GEROLSTEIN at 8:44 AM