Vienna by day, Vienna by night

We had arrived in a damp and grey Vienna. But when we awoke, the sun had got his hat on, and all was right with the world.

Old memories have to be cared for, so I led us down to the famous Café Museum for a Viennese breakfast of coffee, rolls and a nice soft-boiled egg in a felt fez. It was just the same as it used to be. All those impossible cakes and sweet things under glass. The smell of coffee. The newspapers. The waiters have got younger, I think, in 20 years… the newspaper headlines are much the same… 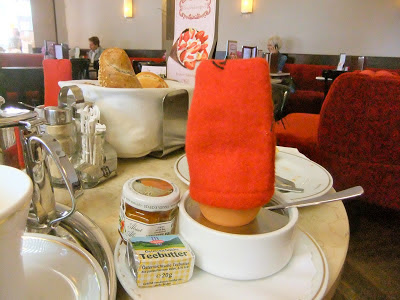 I’d scheduled the first stop on my hopelessly unguided tour of the Innere Stadt to be the ‘Mozarthaus’. Well, if you come to a musical capital with a musician, you have to be a bit musi-touristical. And our hotel room overlooked (just my luck!) the Robert Stolz Platz, so we needed a bit of upmarketing composer-wise.

So up the Kärtnerstrasse .. oh dear, Vienna is just like everywhere else. The beautiful old main streets and squares are just full of cheap and rubbishy shops. You have to go off the main drag and away from the main sights to get the real places. 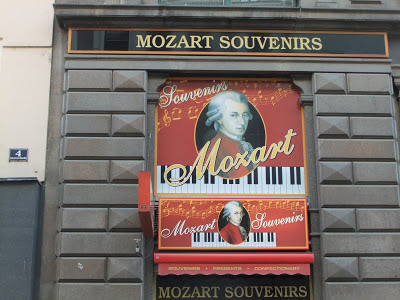 No Mozart Souvenirs wasn’t selling locks of Wolfgang’s true wig, it was selling the same sort of cheap nonsense sold in every tourist place in the world.

From Mozart Souvenirs to the Mozarthaus was but a short walk, but it takes one plumb past Vienna’s celebrated Stephansdom. I’m only 67 years old, so I’ve never seen this landmark church when it wasn’t dressed up in scaffold. But, my goodness, I might! They have made enormous progress in its restoration, and its roofs were twinkling beautifully in the sunlight 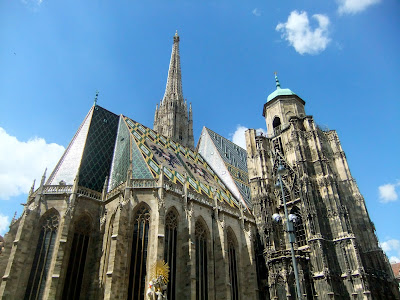 I wasn’t going to go in to the Mozarthaus (5 euros) because I have looked at that bare suite of C18th rooms before and, frankly, there is little to see. But I wanted a loo, and the man said the attraction had been ‘done up’ in 2006, so I weakened. It has indeed been done up, and very smartly. And it is no longer empty, but filled with very fair Mozarty things. But none of it, as Paul remarked, actually ‘his’. So its still basically of interest for just standing where W.A.M once stood, slept and wrote. 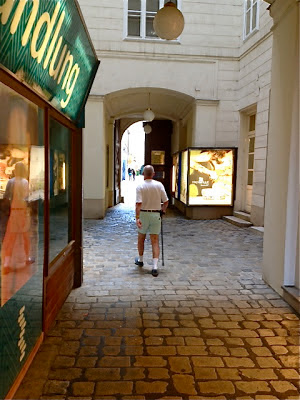 You weren’t allowed to take pictures (why?) but P snapped the foto of the day just outside the door. Skyscraper apartments aren’t a 20th century invention! 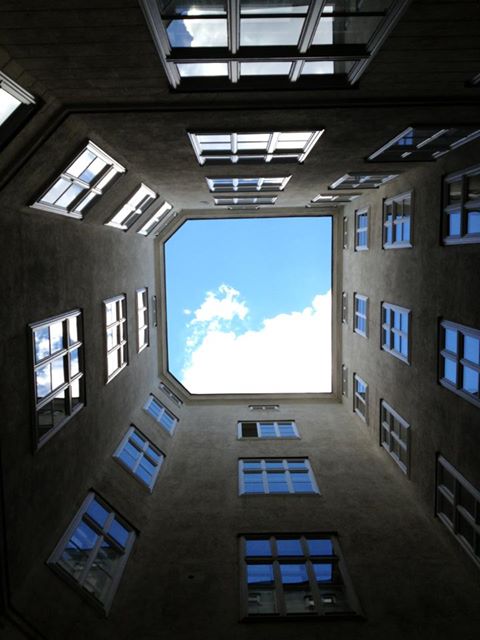 We wandered past the dear old Kammeroper (once my Vienna ‘base’) up to the Donau Canal to look at the very khaki-coloured Danube. I wonder if they still have the Sunday market on the quays. It looked rather sad and grubby, and was lined with commercial restaurant ships (and one Badeschiff), so we didn’t linger. 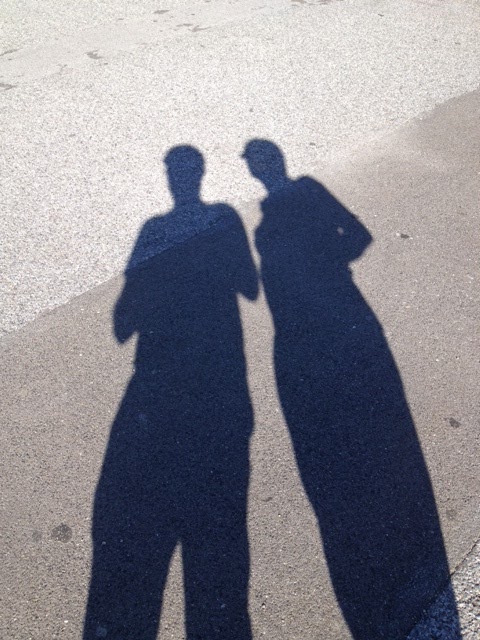 We turned on our heels (resisting Währing and great-grandfather Adolf’s grave) and headed back to the land of beautiful buildings and the not really over-commercialised Graben, in search of refreshment.
Needless to say, we ignored the large establishments round the place, and slipped down a sidestreet where we discovered the tiny Café Hawelka. With this plaque. I think we must have been in the Jewish quarter. But there seem to be several of those. Anyway it was a great little café and a pleasant spot… 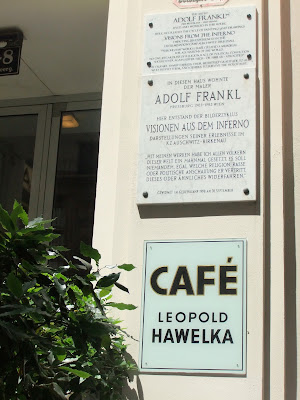 The real refreshment of the day was pre-scheduled to be another musical stop. When alone and lonely in Vienna in the 1980s, I used to take a glass at a little Café Opera (muzak: suitable), and at the end of the street was what was said to be the place where Schubert and his friends used to have their nightly pint. You know, Das Dreimäderlhaus Act I scene I. So ‘Die drei Hacken’ in the aptly-named Singerstrasse was a natural for us. And Wiener Schnitzel and Tafelspitz an obligatory menu. With a little glass of beer… 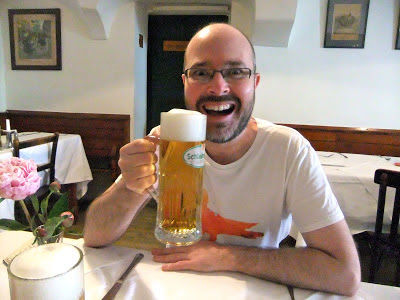 Where the story is good, the food is almost always bad. Today was a joyful exception. Everything about the Drei Hacken was delightful, food most definitely included. It will be a must on any trip to Wien. 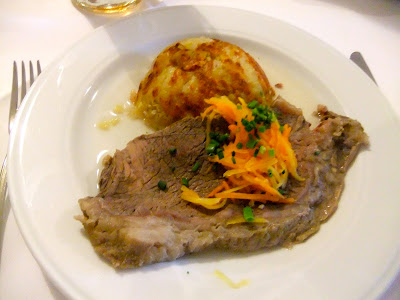 After a little digestive pause, we started on the second part of our Highlights-of-Vienna-in-24-Hours. I mean, you have to go to the Hofburg. So off to Schillerplatz and .. what? Herr Schiller on his plinth with the rainbow flag fluttering behind him? 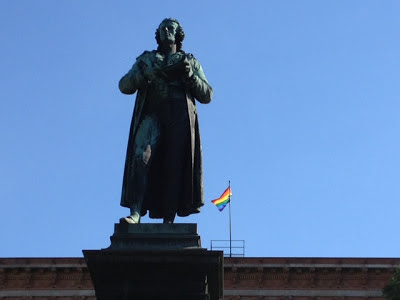 Was Schiller gay? I’ve no idea. But it turned out that we had hit Vienna in Gay Pride Week. Maria Theresia’s gardens were full of beflagged tents ... the rainbow flag decorated the posterior of a bronze horse … but I think we were the gayest thing there. A slightly forlorn girl worker obviously thought so. She pressed a rainbow package into my hand. A condom labelled Take the Test. Why me? Why not Paul? I suppose I should have been flattered. 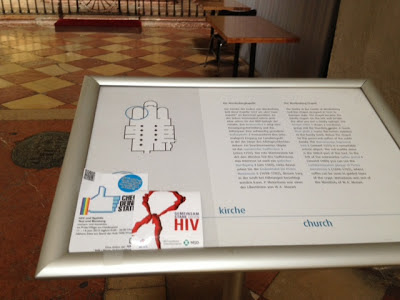 The Hofburg and the Museum Quartier were in a large part of their glory. Since those years when I used to walk through them every morning, to work, the scaffolding and restoration have come on hugely. I looked for the little door that used to lead me to the Theater Archiv … I think it was that one … sigh. 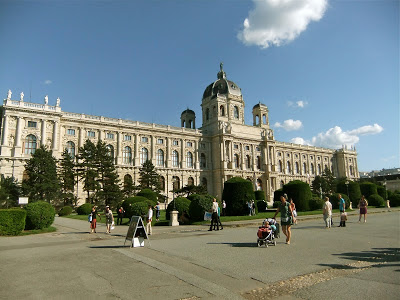 Out into the Michaelerplatz, which was being archeologised last time I was here. All done now. Excellent. And, underneath the alarmingly homophiliac statues of the gate (Gay Pride should have shifted out there) was a line of the inevitable touristy horse-drawn landaus. And one poor horsey chewing on the metal of the vehicle. So bored. Just wanting to be somewhere in a meadow, and hoon. His partner was semi-comatosedly dozing. He didn’t want to. I scratched his neck and ears. And then he didn’t want to let me go… I felt like jumping in and driving him off. But instead we did a church.

Neither of us is really into church tourism. But the Michaelerkirche called. And look whom I found inside! Metastasio! 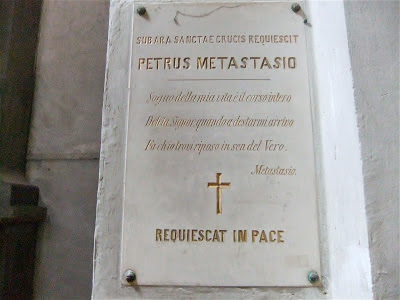 And this fellow. Whoever he is. Who looks as if he would enjoy Gay Pride too. I left him my condom. 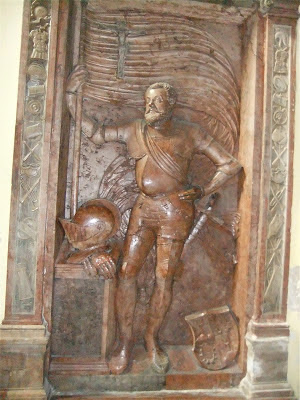 We completed the transit of Wien, via the Freyburg of happy memories, to the Burgtheater – just because it’s a theatre – then turned for the return trip. Our show was at Ronacher, not far from the Drei Hacken, at 7.30, so time, first, for the odd aperitif or snack. Where?
I’m pretty good at picking winning little places, but Paul is a champion. We were nearly tempted by one called ’Vino’ (Riccardo?) but we pushed on till the theatre was in sight at the end of the somethingstrasse (Himmelspforter, it seems). There were several cafés along its length, some with flowers and pretties. Paul chose the plain and dark one. OK. And was he right!

We left ‘Number 13’, its wonderful folk and delightful atmosphere, seven hours later. Oh, we popped into Ronacher for a bit in the middle, for the show, which wasn’t our kind of show at all (extra-loud, subtle-as-a-stick, made-for-American-teenagers), but the kids who played it were our kind of kids. And No13 is the gypsies’ caff!
And it was in the company of an adorable bunch of talented young theatricals, Lord bless ‘em, that we finished our night… 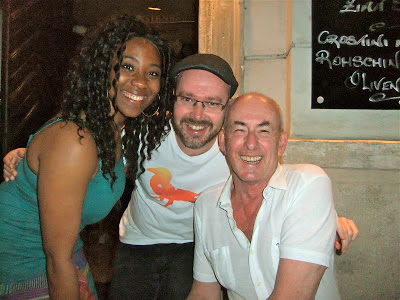 Oh, Number 13 had its plaque and its famous ex-resident too. The famous Hungarian Rakocsi! 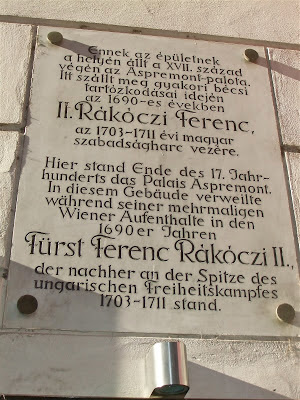 When youre booked to fly home in the mid-afternoon, after a late (for me) night out, the last day isn’t a day for plans and excursions. But we did have one highlight to come. After breakfast at the Museum, we wandered back to the hotel, past … the Steinway showroom. So – why not? – we went in. And Paul played on half a dozen 30,000 to 100,000 euro instruments. We liked the same one best. 29,000. But where would we put it…? J

Postscript. Just to make things absolutely perfect, on the other side of the world … well, our little Livia has been running very disappointingly since coming back from injury. I really thought she might be finished. Her race was 6am Berlin time .. but I made it, computer under the bedclothes so as not to wake my neighbour. But I did wake him … because she won!
Rah, Livia!  Rah, Wendy!  Rah, me!! 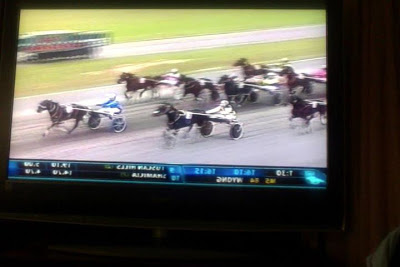 Posted by GEROLSTEIN at 9:27 AM