.
Well, right now New Zealand is the nearest thing to a home I have … and it's more than half a year since I set foot there. And summer has come to an end in Europe, or at least its threatening to, just a Christchurch is bursting into blossom… so, it’s clearly there that I should be, isn’t it?

My last couple of days in Berlin were as eventful as all the others.
Geerd returned from his romantic voyage to Switzerland, Horst resurfaced, Kevin’s friend (and now mine, too!) Florida Eser descended from Givrins for a flat-hunting expedition in Berlin, and we all headed for an evening out dining very agreeably indeed at the Fischerhütte on the banks of the Schlatensee. 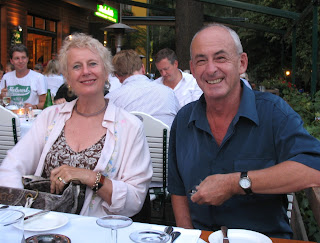 The next morning, Kevin chauffeured Florida around some of the choicer residentially-possible areas of Berlin … we took in breakfast on the Stuttgarter-Platz in Charlottenburg (I chose a Bavarian breakfast, which was a pair of very perfumed white sausages with mustard and bagel) … 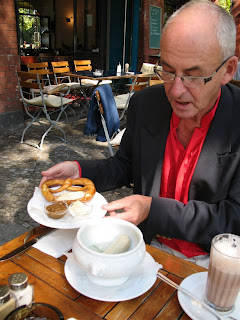 and then continued on to Prenzlauer Berg. The lovely old buildings of the area are rapidly being converted into dashing restorations, or giving place to half-million euro apartments, but a few derelict buildings still remain to remind you of the East Germany of not so very long ago. 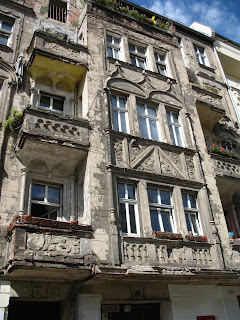 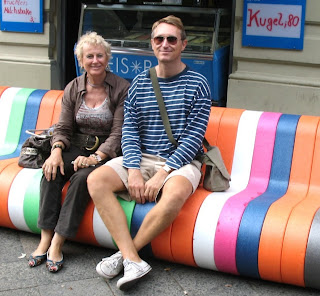 Then, a few hours later, I was on my way to Tegel airport. With my red cabin bag, stuffed with the necessities of life.. and nothing else.
Booking flights on the Internet is fraught with hazard. The Internet – notably the Travel Overland website -- doesn’t tell you that Air Berlin doesn’t book people and suitcases through onto Qantas, and that you therefore have to leave an extra hour between flights to allow for recuperating luggage, re-checking in etc etc. It just sells you almost impossible collections of theoretically adjoining flights and leaves you to get out of the merde thus created all on your own. My bad BMI Baby experience of last year had, fortunately, made me wary. I checked, and became aware that, with suitcase, I wouldn’t make it. So my suitcase remains in Berlin whilst I am now in New Zealand.
My thirty-something hours of airports and airplanes weren’t, surprisingly, all bad. Both the Air Berlin and Qantas desk staff were splendidly helpful and cheerful, and the dreaded change between the said two airlines (without luggage) at Frankfurt went like a dream, thanks to a chance encounter with an angel. Ravishing, 21 year-old Amelie from Charlottenburg (rising international TV presenter and surfing instructor), off for a few months backpacking round Australia, took me under her wing, got me safely to the plane, and we spent the flight to the other side of the world in jolly company. Amelie’s voyage to the Southern hemisphere will now, hopefully, include New Zealand.
The only hiccough in an otherwise comfy and punctual trip was the lateness of my final flight: Sydney-Christchurch on Emirates. But their plane was easily the nicest … so I may use them for the whole trip next year. If they promise to be on time… 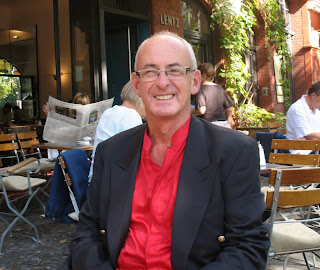 But that’s a good few months away. Right now, I am revelling jet-laggedly in being back at Gerolstein. A spick-and-span Gerolstein (Wendy has done amazing things in the gardens etc), glittering with white sunshine as it doffs its winter coat and prepares for spring. The grass is green, the plum-blossoms are out and the magnolia buds are cowering from the morning frosts. The horses are still as shaggy as mountain goats, but it won’t be long… the New Zealand summer is on its way. 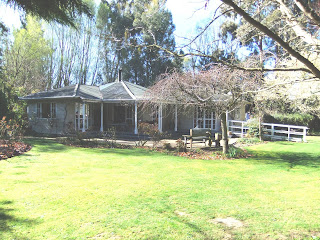