.
It’s a week since I landed in New Zealand. A week of jet-lag and of the most awful Qantas cold (I would definitely count it as flying flu) which, between them, have stopped me from getting sufficiently out and about, even around the green, green paddocks of Gerolstein.
I limped forth for doctor, blood-letter and dentist, I made it to the local racetrack to watch Elena rehearsing for her Big Day on Wednesday, I crawled through the grocery and the hardware shops and fulfilled other such necessities of life, but otherwise … well, I have barely even hugged a horse. 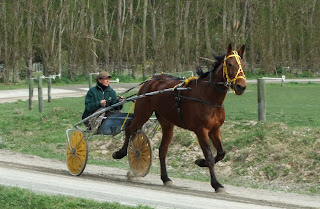 Today, however, dawned a perfect spring day. It was impossible to stay indoors, even to mull my plans for building myself a beautiful bathroom as an anniversary present. I’ve never had one. A beautiful bathroom, that is. Even in my Mayfair mansions, even in my St Paul de Vence triplex, glorious and luxurious homes that they were, the bathrooms wouldn’t have passed muster in a two-star hotel. And this one is the worst of all … see below. You couldn’t swing a starving kitten in it (sorry, Minnie). So, I have called in ‘Revamp Design’ and he is coming the day after tomorrow to look at smashing down a wall and … 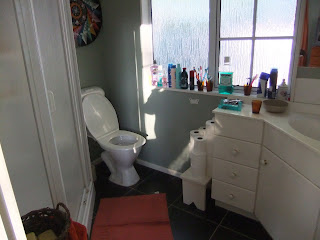 Getting ahead of the act, I this morning started a major spring clean and chuck out (‘if you haven’t used it in two years…’), which resulted in a vast heap of burnables, which needed to go on last year’s vaster pile of tree-toppings-in-the-paddock-waiting-to-be-burned, which meant that the mares had to be got out of the fire-paddock, and since the Grand Duchess is nine months gone, it was the perfect day to strip off her winter coat and let her feel the sun on her back, before she was moved on to the lush grass in a fresh and maternally-provocative paddock..
The Duchess is looking splendid. Big, motherly, glowing and splendid. Normally, she will foal at the beginning of November, so I had better make sure to be here. Even though, of course, the child she is carrying is not mine. Being already in possession of quite enough baby horses, I have loaned Duchess this year to The Man Who Knows More About Breeding Than Anyone. But, of course, I shall still be a godfather. 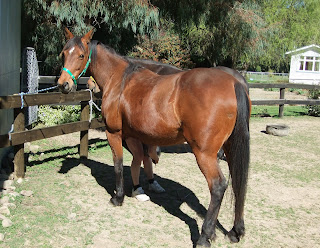 So. I’ve burned the annual fires, and with them I’ve thrown out great chunks of my old life: stuff that I’ve hiked, down the years, from London to St Paul to New Zealand. I know, on occasions like this you can burn too much. But I don’t think the National Museum/Library of New Zealand will want Gänzl manuscripts and memorabilia. This country has never really considered me a ‘New Zealand author’, any more than they consider my brilliant brother a ‘New Zealand poet’. (I will say however that the Library does annotate my cards ‘author is a New-Zealander’). Oh dear, ‘funeral’ pyres do provoke extraordinary thoughts.

But in a way, that’s what this is. During the winter, Wendy has worked magic in transforming the farm. It has never looked so lovely. But it is different. So now it is up to me. It is time, nearly three years on, to turn this place into ‘Kurt’s holiday home’ rather than ‘the place where Kurt and Ian lived, and Ian died’. The bathroom will be a good start. Go for the bathroom…?
Posted by GEROLSTEIN at 1:46 AM