Elena's Big Day, or 'I am a racehorse'

.
Well, it came at last. 23 September 2009. Three and a half years since Elena first became part of the Gerolstein family, and changed her maiden name of ‘Bromac’ for the rolling ‘Elena de Gerolstein’. She’s been through quite a lot since then, including that big operation on her throat, but since she returned to training and then to the workouts track, it’s been evident that she can run somewhat, and that she would undeniably make a racehorse. But fate still had the odd sneaky to throw at her. When she went to qualify something went wrong. When she was about to go a second time, we found that her corpuscles had been up the spout the first time and she wasn’t yet quite over it. So we scratched. Today was the third time. And this time…
It still wasn’t all smoothness. But not because of her. First of all, although it didn’t rain here, it did at Bank’s Peninsula, leaving a soggyish track which would slow the horses by a couple of seconds. Then, we arrived at the track, only to find that the naughty mare had left her bridle back at Gerolstein. So I wandered across to the Edmonds homestead to borrow a replacement. There I met a middle-sized dobermann named Weasel. When I took no notice of him, Weasel pouted and buried his teeth in my calf. So I returned to the racetrack, with bridle, but sticking-plastered behind, and with blood dribbling down my leg. Someone said it’s good luck to get bitten by a dog. If so, thank you Weasel, but next time choose a bit of me that isn’t naked. 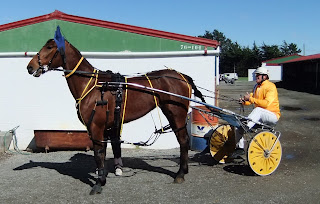 Elena’s qualifying heat had drawn a field of … two. But the other starter was a richly-bred Christian Cullen filly from the stud of my old amateur-driving colleague Mike Stratford, trained by the all-(or nearly all)-conquering Tim Butt. Classy company.
Off the mobile gate, Elena powered straight to the front, and Murray [Edmonds] kept her there, hooning along at safely a bit faster than the qualifying-rate needed, towing the other fellow along, until the home straight, where he loomed up greenly outside her. Murray let him loom, and when he zipped past, Murray let him zip. He knew he was five whole seconds inside qualifying time, and there was no sense in gutting our gigantic girl by giving chase uneccessarily. A qualifying trial (unless you are trying to sell your animal and want to look impressive) is just that: all you have to do is beat the clock, and you’re a ‘winner’. Elena not only did the time, she clocked 3 ½ seconds better than the time. On a soggy track, and with an unforced last 400 metres. Excuse us if we’re delighted.
I haven’t got any photos of the race. Well, I have several photos of Elena’s backside: she was gone too fast before the shutter closed! But I do have this one, as she came off the track, and I love it. Wendy hurrying to say ‘well done, our girl’ as Murray brings her in... a qualified racehorse at last! 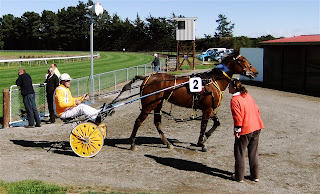 One last (for the moment) Elena photograph. I can’t resist it. Standing by the float, waiting to be loaded for the homeward journey. Upright and haughty, with that look that made me fall in love with her at first sight at Bromac Lodge in February 2006, saying: ‘I require to be taken home now, if you please’ 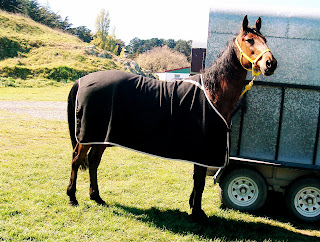 Tomorrow, on the other side of the world, Ténor will have his turn at the ‘quallies’ at the racetrack of the city of Caen … if he can do as well as she, this will be a wonderful week. Give or take a Weasel-bite.
Posted by GEROLSTEIN at 9:19 PM