Now, those of you who read this blog will know all about Elena de Gerolstein, Lucie de Gerolstein and D’Arcy de Gerolstein – how could you not --, but you may very well not have heard, except in passing, about Livia de Gerolstein..
Yes, another one.
But Livia lives not in New Zealand – nor even in France -- but in Australia.
And, yes, she’s ours. Mine and Wendy’s.

How did we come to own a horse in Australia? Well, its like this ….

During the weeks before I leaped on the late lamented Gazellebank and headed for Europe, half a year and more ago, a yearling sales catalogue came through the post. I do wish they wouldn’t. In the years when I wanted these catalogues, I couldn’t get them. Since I actually went and bought a horse (Elena), they never stop coming. And this one, for heaven’s sake, was from Australia. I remember it was an evening when Wendy was out, and I was dully watching Trackside and, for some reason (dull Trackside?), I picked up the despised catalogue and whoops … it opened at Lot 171. Bay filly Live or Die-Estelle Bromac. The said Estelle just happens to be my Elena’s sister. And there, on the pedigree page, were the names of our dear Tui (Hot Blooded Woman), Cliffie (Lite Gasp), Wilma (Lite Phantom) …
What on earth was this horse doing in Australia? Ah, well…
But in the days that followed, I kept opening that catalogue, until page 171 became stained with coffee, highlighter and ... well, just a little wine.. 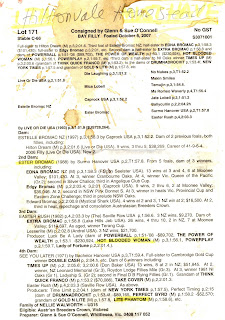 I talked (as I do), and finally Graeme Lang trekked from Melton to Glenn and Sue O’Connell’s place near Whittlesea to look her over, and reported that she was a nice and not oversized (sorry, Elena) girl…
But the sale was to be the day that I sailed out of Auckland. What to do? Should I? Shouldn’t I? Wasn’t this really a ‘coup de folie’? Well, maybe if she were really cheap…? Elena cost $20,000. So, say .. ten? ‘You’ll never get her for that’ said the pundits. Very well, I’ll go to eleven. Maximum. That way, at least I’ve tried.
And so, on the somethingth of February 2009, as the Gazellebank and I sailed forth for Nouméa, at the price of exactly $11,000, Wendy and I became the owners of Elena’s niece, the filly who we will call Livia de Gerolstein (or as near to that as the Victorian racing authorities will allow us), and who is now in work at Mr Lang’s place in Melton, Vic, with the prospects of making an early two year-old. (Hear that, Elena!).

I, of course, haven’t yet met Livia, but Wendy managed to grab a couple of days respite and dash across the Tasman Sea … ermmm, cousin Tracy may not be David Hamilton with a camera, but at least Wendy has now driven our youngest ‘daughter’ and I – until I in my turn dash across the great divide, have a kind of a photo. 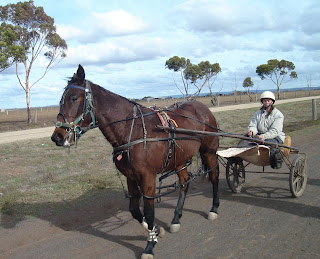 Welcome to our little family, Livia. Along with Elena, Tenor, Rosy, Lucie, D’Arcy, Rose, Mikie… from Les Baux, Normandy, to Sefton, New Zealand, by way of Melton, Victoria…
Posted by GEROLSTEIN at 11:20 PM