I strayed today.  In my daily pre-breakfast zip through the pages on ebay, I have a system. Well, you have to reduce the number of items to look at or breakfast would never happen. So I 'search' for my keywords with a few minuses.  -Rare. Anything labelled 'rare' is almost certain not to be. -! Any listing full of exclamation marks is going to be a waste of time ...    I haven't got the time to waste on such as 'RARE! Dancer!! Christina Nilson'. Anyway, that's my ebay method.

I also, alas, have a handicapped right arm/hand (legacy of a stroke) and have been reduced to typing with two fingers, so sometimes mistakes happen, and yesterday I pushed the wrong key when applying my filters and landed on 'Rare Antique Victorian American Costumed Singer Emma Nichols PA CDV Photo Lot!'  Emma [J] Nichols? Never heard of her. A plain little lady with the most preposterous cloak and tiara .. what on earth was she. Well, let's have a late breakfast ... 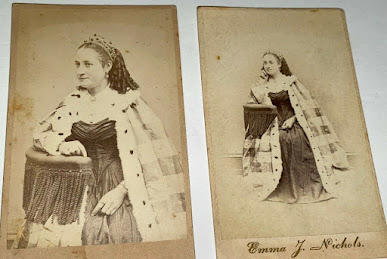 Emma J NICHOLS was indeed, for a decade, a singer in the western part of America. But that is not a costume. That was evidently her platform garb. For Emma was a ballad singer with minor concert groups in, mostly, the western part of the United States.

By 1860, already, she is advertising as a teacher of singing, and by 1862 she is the soprano with Father Jim T Gulick's 'Continental Old Folks Company', a company performing olde tyme songs, in 18th century costumes around 1 and 2 night stands from New Brunswick, Trenton, Princeton, Bordentown, Burlington, Mount Holly, Frankford ..  fellow performers, Messrs George M Shep(p)ard, J H Holloway and Gulick.

Mr Gulick went on to become one of Newcombe's Minstrels, the Dupres and Benedict Minstrels.

'Father Kemp's Old Folks Company' 'from Reading, Mass' (37 members) had originally (1857?) been an amateur group which had sung its 18th century chorales in costume at Niblo's Garden in 1859. The star act was 92 year-old Grandfather Foss with his Great Grandfather Fiddle. Emma soon transferred to the Kemp group (now 22 people with her as featured soprano), which made a trip to England in 1860 to show their novelty act. Mr Nichols was now 'Father Kemp's treasurer.  Emma 'the celebrated New England Songstress' stayed for nearly a decade years with these two troupes (which became ''Father' Kemp junior's' and the Continental Old Folks), progressing in her billing to 'the Jenny Lind of America'. In 1869 I see her setting out from Neponset, Mass, as a member of Spaudling's Bell Ringers, through Plainfield, Washington, Hackettstown, Orange, Newton, Newark ...

In 1870 (20 February), Emma gave birth to a son, Edwin Bowley Nichols, by  time Mr Nichols was listed as 'professor of music'. I don't see her performing thereafter. She is listed in 1870 as 'Music teacher'. Thomas is 'farm labourer'.

Emma died of peritonitis at home at Plaistow NH, one day after her 39th birthday. I don't know what became of Thomas. Edwin (shoecutter) married, had a son, and weeks later committed suicide (24 October 1896), aged 26. The son changed his name ...

Bit of a sad tale, really. Better put my filters back on.

And look what's turned up after all that! 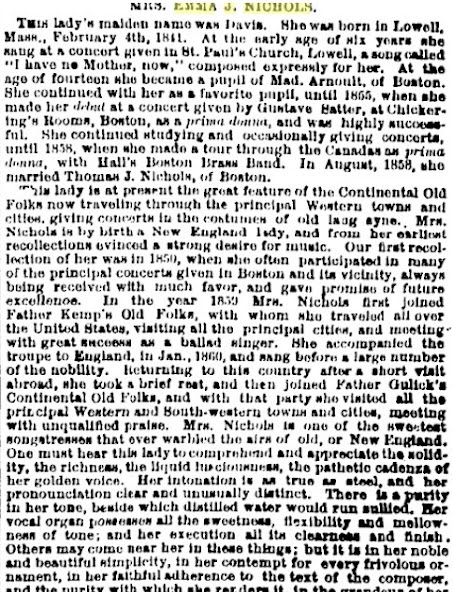 Happily, they don't carry the story to its end.

And what IS that cloak? An 18th century New Hampshire national costume?

Posted by GEROLSTEIN at 6:21 PM