I came upon this photo today.

That looks pretty old, said I to myself, said I. 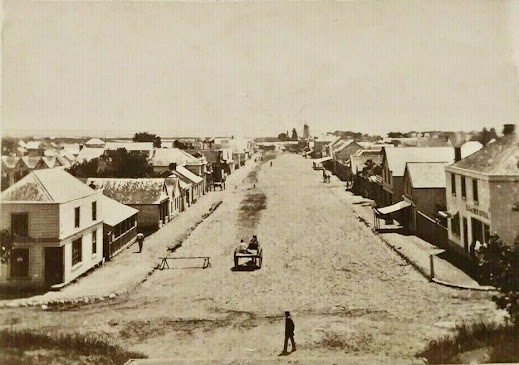 Well, the city of Nelson is not very much older than the birth of commercial photography, and I see that the Nelson museum's collection of photos begins 'from the 1860s' ... so ...

Alexander Fletcher (b Macduff 1838; d Fitzroy 13 November 1914) -- who took this photo -- set up as a photographer in Bronti (sic) Street 'next house to Captain Walmsley', Nelson at the end of 1861, and he left the city, with his new bride, Catherine Reid McGee, the pubkeeper's daughter, in 1870.  So we can safely say that this shot ws taken 'in the 1860s'. He wasn't Nelson's first photographer. Mr. J N Crombie, Mr Lane and Mr Davis had variously preceded him, along with others of brief duration, by three years or so, but Mr Fletcher was the first to make an extended go -- nine years -- of it. After which he, apparently, had a shot  at gold-mining, before heading to Melbourne ...  where he ran an art gallery in Collins Street, and supervised the Fine Arts at the Indian and Colonial Exhibition ... wow! he was presented with a bronze medal by the Prince of Wales for his organisation of the Melbourne Exhibition 1882.

Anyway, I didn't intend here to write a history of Nelson, or building or photography in Nelson. Just to preserve, for my own pleasure, this picture of the early days of Nelson ... the city where I grew up.

Posted by GEROLSTEIN at 6:47 PM