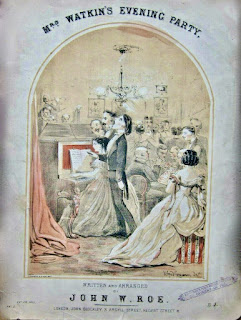 Born in Norwich, into a local family of beer-sellers and cotton-manufacturers, Roe was the son of an elder John Wiggett Roe (b Norwich 3 September 1775; d Norwich, 11 March 1812), well known in the area for his prowess as a vocalist, and his wife Mary, née Newsom.

His career is just a little bit difficult to decipher wholly accurately, as during the 1840s there were three Mr Roes active in the London musical world, the other two being a Mr John Roe, organist, conductor and music teacher, originally of Manchester, and J W Roe’s own brother, James, also an organist.

I have, however, discovered just why, through the 1830s, I can find no trace of Mr J W Roe in the musical listings of the nation. The 1841 census for Greenwich shows us Mr John Wiggett (sic) aged 20 ‘chemist’ with his wife, Eliza, their three year-old son, John, and 10-month old Robert, boarding in Royal Place, in the company of another ‘chemist’, Mr William Frost Green, his wife, Frances, and their children, Harry and Mary. Frances Green was the former Frances Roe, John Roe’s elder sister. And William Green was the brother of young Mrs Eliza Roe, ‘of St Mary, Whitechapel’ (m City of London Church, 31 August 1836). So Mr J W Roe, like his father, began his singing in an amateur capacity.

And we can, I think, firmly reject him as the Mr Roe, organist of St George the Martyr Church, Southwark, in spite of the fact that this was the same church at which the Greens had been wed in 1838.

Roe seems to have become a professional vocalist around 1843, when he was engaged as a member of the little choir at the new (1842) Temple Church, alongside William Dando, Enoch Hawkins, Mr J Lee and John Calvert 'late of St Paul's', and a group of boys amongst whom was the young W H Cummings.

Roe devoted himself principally to church and part music over the following years, but he also struck out a sideline, which would ultimately serve his memory better.

On 4 November 1845, he mounted a concert at the Crosby Hall, with the participation of 'Miss Thornton' (Annie Mogg) and Edward John Hopkins, the organist from Temple Church. The evening was entitled Facts and Fancies Musically Illustrated. Amongst the fancies were comical versions of the stories of Robinson Crusoe and Little Red Riding Hood, set to musical arrangements by John Liptrot Hatton, another sometime organist at the Temple.
On 26 January 1846, he put up another evening, a more conventional one, at the Princess’s Theatre, under the title The Madrigal and Glee Writers of England and their compositions,with a team of singers including the Williams sisters, the Pyne sisters, Hobbs, W H Seguin and Hatton, but on 4 July he was back with ‘Music for the People’ at National Hall in Holborn, and a few months later was to be seen on the bill at Laurent’s Casino. On 3 November 1846, he returned to Crosby Hall with Moriatt O’Connor, Hobbs, Dando (violin) and Hatton, in an entertainment titled Music, Mirth and Melancholy.

Mr Roe’s comic songs and scenas, however, caught other and important eyes. Hatton purveyed the comical 'Mrs Watkin's Evening Party', and John Parry, the outstanding Victorian purveyor of the classy comedy number, also picked up on Mr Roe. By the time Roe’s 1847 concert came along (Crosby Hall 22 December), Parry’s repertoire had been enriched by ‘King Canute, or the Cold Water Cure’ and the excessively popular ‘Miss Harriet and her Governess’ with words by J W Roe. ‘Our Native Land’, ‘in three short volumes’ a potted history lesson from Julius Caesar to Queen Anne, set by Parry followed, and at Roe’s 1848 concert – after a first half devoted to the Tempest music of Purcell -- Parry delivered their ‘St George and the Dragon’ for the first time. ‘King Alfred, or the Old Woman and the Cakes’ was their next collaboration.
Mr Roe was still a member of the choir at the Temple in 1848 – alongside Seguin, Young, Benson, Hodson, Lovell and Dando – but at some stage, not too long after, he left London, and took up residence in Hove. He was paragraphed ('author of some of Mr Parry's most popular songs') as preparing an entertainment for George Buckland, and he can be seen there in the 1851 census ‘professor of singing, 39’, with Eliza, and their children John Edward, Robert, Alfred, and William, and the four orphaned children of William and Frances Green.

On 9 March 1852, he mounted one last concert in London, at the Store Street Music Hall. Louisa Pyne, Miss Thornton, Priscilla Horton and Henry Phillips took part, as did the English Glee and Madrigal Union and the Temple choirboys. Glees, anthems and ‘a variety of popular pieces’ were given, but there was no mention of a new comic song.

This concert was to be Mr Roe’s last, for he died early in 1853, at the age of 41. His songs lived on, however, in the hands of such as J L Hatton (‘Mr Brown’s Serenade’, ’The Adventures of Little Red Riding Hood’, 'William Tell') and Buckland. The story of Mrs Watkins and her Evening Party was given by George Loder as far afield as New Zealand, by Robert Farquharson in Australia, and was still being performed round the English-singing world, by the very people it burlesqued, half a century later. 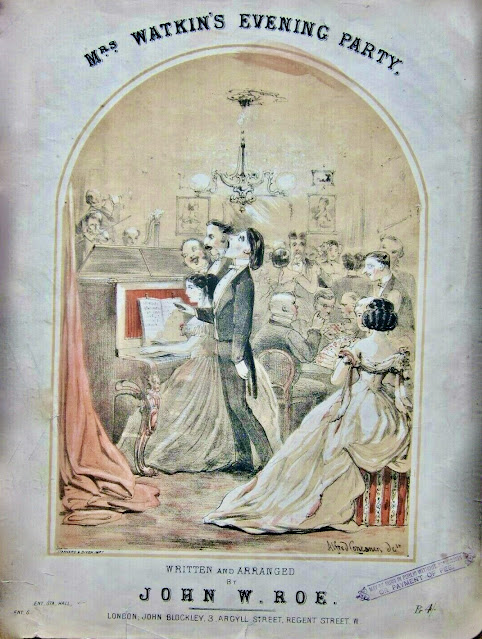 The family’s contribution to music sacred and comic was, however, not yet done. Eldest son, John Edward Roe (b Whitechapel, 28 January 1838; d Brighton, February 1871), by profession an organist, wrote and composed a number of pantomimes and comic songs, but has made himself a place in the small print of the world’s reference books thanks to a hymn-tune entitled ‘Weston’. He was organist to the Brighton Harmonic Society.

Nephew, Frank William Green (1842-1883) went decidedly further, and flooded the 1870s with pieces of light comic theatre and songwords, such as George Buckland’s ‘Mrs Somebody Swallowed a fly’ (music: Alfred Lee). His stage credits included the burlesque The Lying Dutchman, and a plethora of pantomimes and provincial extravaganzas.

The other Mr John Roe (b Manchester c 1815), and his wife Frances née Johnson (b Southwark 28 February 1818, m 5 January 1841), billed inevitably as ‘Mrs John Roe’ were in evidence in minor venues in the 1840s and the 1850s, he playing and conducting and she as a soprano vocalist. Her ‘first appearance’ was billed at O H Toulmin’s concert of 28 December 1843 at the Assembly Rooms, Kennington, and when she sang at the Society of British Musicians she was allowed ‘a charming voice and a style wholly unvicious’ if somewhat ‘timid’. She sang for several seasons in the mid-1840s at the Vauxhall Gardens (‘Di piacer’ etc), and Mr and Mrs John Roe mounted regular concerts, usually at the modest Store Street venue, at which they, their daughter, Frances, also an organist, and Mrs Roe’s singing pupils appeared. Mr Roe seemingly also ventured the flute. Their ‘annual’ concert can be noted through the 1850s, and my last sighting of Mrs Roe is in 1858 singing, alongside Mrs Dixon, at the West London Choral Society. By the 1871 census they can be seen living in Barnet, where Mrs Roe is listed as ‘retired music teacher’. She died there in the early months of 1875.


The latter (‘John Roe jun’) seems to have been the original teacher of Cicely Nott before Jullien got into the act.

Posted by GEROLSTEIN at 9:42 PM