Well, here I am 'locked down' in Yamba. Those in charge have really made a mess of the management of this 'crisis' in Australia.  However, I foresaw this and, last market-day, I martyrised my aged arms and legs carrying double rations up the hill!  I made a huge pot of warming Zuppe, to which I shall add daily ... so all is organised .. 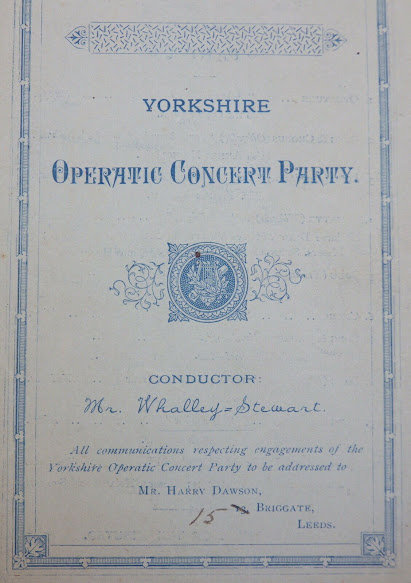 This programme caught my eye, because it contained much Gilbert and Sullivan material ... 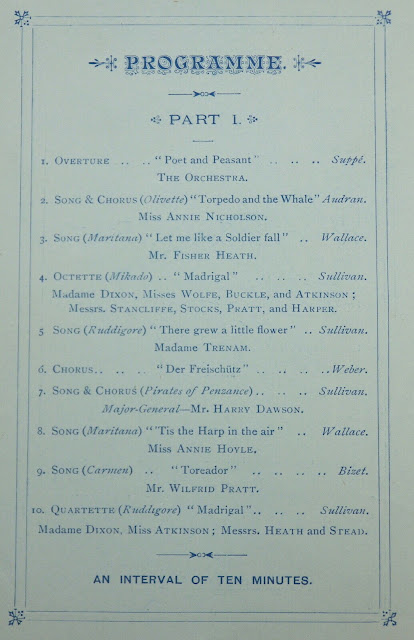 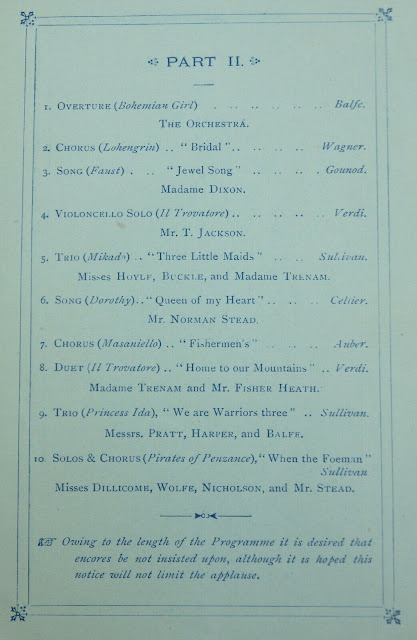 So, when did it date from? No dates on the item, and I'd never heard of one of the Leedsian folk in the lists. Clearly, they were amateurs. Or nearly.  Seemingly this group was trying to be a clone of Josef Cantor's very successful semi-pro Operatic Concert group ..  Did they succeed? I soon found out. No. They didn't. Mr Whalley-Stewart's half-cocked organisation lived for just over a year, during which time they gave three and a bit concerts at the Leeds Coliseum and two twice-dailies at Scarborough over Easter. Finish. 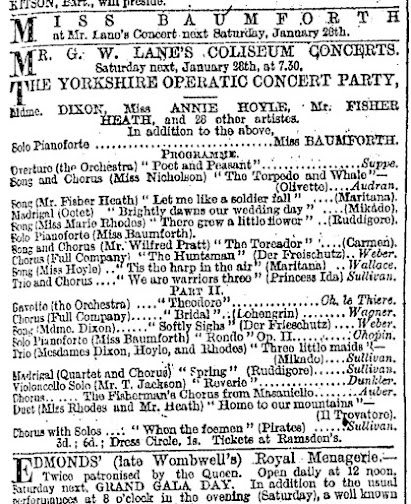 Hmmm. Some slight variations from the programme there. Mrs Trenam seems to have dropped out. And a few typos ...

Well, they got a notice in the local press ...

So, who were these folk? Start at the top of the bill.

'Madame Dixon' is impossible. The splendid Mrs Dixon of the past decades was living out her last years in Wales. Who was this one? And why 'Madame'. Oh, Lord, they have Madame Shaw and Madame Atkinson as well. Oh dear, I thought Leeds was above such provincialisms.  I see 'Madam Dixon of the Albert Hall concerts' (ah! the Albert Hall, Sheffield!) singing the May Queen with the Witton-on-the-Wear Choral Society. Elsewhere it's Madame Dixon of the Leeds and Oldham concerts'. Between 1887 and 1892.

Annie [Eliza] Hoyle (b Armley x 14 July 1864). 'Of Wortley'. Well, of Armley, really. One of the seven children of Alfred Hoyle of Beulah House: 'woollen manufacturer employing 75 men' and his wife Mary née Armitage . Yes, there she is, in 1883, singing at a Wortley concert, in aid of the Congegational School Chapel Roof. And with the Leeds Orchestral Society, singing Bennett's May Queen. And -- Lilliput love us -- on the same programme Mr J Sidney Jones jr played two Chopin Waltzes and a Mazurka! Thirteen years before The Geisha! Gaul's The Holy City in Halifax, the Leeds Masonic Institution, and with Jones sr and his Leeds Rifles band playing selections from Princess Ida. Annie, as usual, sang 'Auntie'. Mackenzie's Jason at Armley, Stainer's The Daughter of Jairus, Cummings's The Fairy Ring, at Shepley, Harrogate, at the Coliseum concerts with W H Dawson of York Minster, in a concert party for that frightful busybody F W Crossley (he was into saving Liverpool lassies from being loose), in the Messiah at Bramley and Pudsey, Acis and Galatea in Leeds, The May Queen at Stockton, Dr Spark's Immanuel première ...  Annie was experienced, capable, delightful and throroughly deserved her billing in this company.  She didn't appear with the company again, though, for 21 May 1889 she married Mr Lewis Alexander Grant of Formby, timber salesman in Prittlewell, Essex. She had a son Henry Armitage Grant, a daughter Dorothy Lillian (Mrs Raven) who died, as did her father ... guess where: Napier, New Zealand ...  I suppose he was the Lewis Alexander Grant, boarding-house keeper and sawmiller of Taumaranui and serial bankrupt ...

The top-billed gentleman, Mr William Fisher Heath (b Bishop Monkton, Yorks 19 October 1861; d Leeds 6 December 1939) was not a virtual professional like Annie. He had a day job.  The eldest son of a landed farmer, he became a school-teacher, which employ he pursued throughout his working life, rising to become a long serving headmaster, and local president of the NUT in the 1920s. However, professional, semi-pro or whatever, he ran a career as a tenor vocalist, in parallel to his day job, for more than twenty years. I see him as a pupil of the ubiquitous Dr Spark in 1883, singing 'In native worth' under his teacher's aegis, and from there he quite simply carried on, appearing regularly, singing everything from oratorio to 'Once Again'  or 'The Message' and a selection from Dorothy.  For twenty years and more. Always to agreeable notices.

The originally announced mezzo for our concert, as we can see from the proof programme, was Mrs Eleanor Trenam (née Eleanor Rhodes, b Leeds 1858, d 40 Craven Tce, Leeds 11 August 1914). Mrs Trenam had been a Yorkshire concert regular for some years, she had also been a wife for a few years, but her telegraph-man husband had died young. She had worked as a schoolteacher, but latterly she taught singing.  However, she was on the local performing scene at least 1884-1896. Later, she remarried and became Mrs William Broomhead, wife of a glass stainer ...

However, as we see from the notices, she didn't do it. She was replaced by Miss Marie Rhodes. Miss Rhodes was actually Mary Ann Rhodes (b Holbeck; d Leeds 18 March 1954), daughter of Titus Hainsworth Rhodes, mechanic, and his wife Eleanor ... and yes, I thought, too, that she must be related to Mrs Trenam; but if so, it was distantly. It was a kind of silly nom de musique to choose, because 'Marie Rhodes' was a well-known actress, but Mary Ann would way outlast her namesake. And, anyway, from 1895, she was Mrs W Fisher Heath, under which name she performed locally for another decade, while producing seven children.

Proceeding down the bill, we find Mr Wilfrid/Wilford/Wel[l]ford Pratt. Baritone. (b Hollin Bank x 17 Aptil 1853; d Brierfield 1932). He's the fellow whom the press criticised for his lifeless Escamillo. But he sang around the Lancashire and Yorkshire towns and villages for forty years. He was born in the Little Marsden/Brierley area, the son of a shoemaker turned factory stoker/fireman Robert Pratt and his wife Elizabeth née Landless who worked as a cotton powerloom operative, and I see him as early as 1868 singing 'Mother, I've come home to die' in a local concert. His younger sister, Maggie (b New Rd Little Marsden 3 January 1860) was a 'pleasing soprano' and the two of them can be seen in the late 1870s singing at hometown occasions. Wilfrid began as a warehouseman, but became a cotton warp dresser (I see him 'of Messrs Pickles Bros' in 1903), and sang on the side. He married (1 October 1879) Margaret Clegg (d 9 Oxford St, Brierfield November 1930), daughter of local engineer, and they had three children, of whom a son and a daughter survived.
He was fairly active in the 1880s, but after his stint with the Concert Party his appearance became occasional. I see him singing -- alongside his son, Thomas (24 June 1887-1951) cotton warp dresser -- at a Concert in the Conservative Club Billiard Rooms at Brierfield.
I haven't done so well with the minor players ... but what about the two gentlemen displayed on page one. Mr Whalley Stewart and Mr Harry Dawson. They seem to be in charge of the 'team'.
'Whalley' wasn't 'Whalley' at all. He was the son of Scotsman Alexander Stewart, brassfounder, and he was born at Albion Court, Leeds 4 June 1863 as plain William Stewart. And by profession, he was a lithographic draghtsman. However, he was also a keen amateur musician, and it seems to have been on his initiative that the group was formed. And, I would suspect, that this fancy concert programme was printed. Anyhow Whalley, who had removed with his parents to Barkston Ash, didn't stay long in the concert world. After this experiment, he tried his hand at local politics, 'oil and cake merchant', and in 1896 I see him referred to as 'bandmaster of the Industrial School Band'.
In 1892 he married Mary Jane Fawcett, began a family, and went back to lithography. Until in about 1906, they all packed up emigrated to ... New Zealand. They settled in Stanley Bay, Auckland, where Whalley became bandmaster of the Devonport Brass Band, founded the Auckland Mounted Rifles Band, zipped off with them to Egypt (where they gave concerts) for the duration of the war, and returned home to Waitematata, and NZ radio concertising. He died in Devonport 19 April 1925.
Harry (b Leeds 28 June 1864; d Harrogate 14 September 1926) started life as a lithographer, too. His father, John Dawson, was a draper and master milliner at 15 Briggate, and Harry had musical training with Dr Spark. In his mid-twenties he had a brief crack at comic singing, before settling down to lithography, marriage (Mary Isabel Harrison), five children and an ultimate career as a house furnishings merchant in Harrogate and Knaresborough.
So, that leaves us Annie Nicholson, Miss [M] Wolfe, Miss [Bertha] Buckle, Miss [Lottie?] Atkinson, Mr [?H] Stancliffe, Mr [A] Stocks, Mr Harper, Mr Norman Stead, Miss Dillicome (!) and Mr Balfe (!!).
Norman Stead (b Holbeck 28 November 1864) was a member of a musical family, the children of monumental sculptor and stone merchant Ezra Stead of Oulton cum Woodlesford and his wife Ruth née Sheard. The first three of their children -- Mary Elizabeth, Norman and Ernest Paul -- all performed as vocalists. Ernest was the most successful. He spent time in the choir at Peterborough Cathedral, and later sang in the Leeds concerts and taught music. Norman continued to work for his father, and at my last sighting, widowered in 1911, he was a traveller in the oil business.
Lottie Atkinson 'of the Coliseum and West Rising concerts' '28 Cobden Place, Leeds' was Charlotte Emma Atkinson (b 1864), daughter of John W Atkinson and his wife Matilda. She was another Spark pupil. So this is probably she, out without her Christian name. Which was soon (29 September 1890) to become Mrs William Walter Alderson.
Bertha [Swinton] Buckle (b Hutton Hill/Leyburn 1861; d 1908) was an ephemeral singer. She was a daughter of a Captain in the North Yorkshire militia. The Captain 'of Sowerby Thirsk' and his eleven children (what's so fearsome about that?) lived at the Micklegate, York, with seven servants. I see her singing a couple of times, but more often in the society pages. Bertha went off to London, married Warren Bruce Smith 'of Aubrey Lodge, Emsworth', and died a few years later.
The rest .. they show up once or twice, with or without an initial ... and vanish again ... back into their real lives ...
Post scriptum. There is one singer whom I must mention. When Annie Hoyle went off and wed, her replacement as soprano was a lady billed as 'Madame F Shaw' .. 'of Harrogate'.  She was apparently a good vocalist. Anyhow, she had only just become Mrs Frederic William Shaw: up till now she had been Mary Ann Lupton (b Wortley x 25 December 1864), and a tailoress who sang. I see her in concerts from 1885. Her mother, née Ann Haywood, was also a singer. Mr Shaw subsequently became the registrar for Harrogate, and Mary Ann gave up singing and helped him in his job. They had a son, Arnold Lupton Shaw, and a daughter Sylvia Theodora (Mrs Lockhart) who did not carry the music into a third generation.
Well. That's what went on in the city of Leeds ...  it was fun to visit it 130 years later .. all because of a little bit of blue paper ..

Posted by GEROLSTEIN at 1:56 AM