Cartesians: Who WAS Janet Edmondson ...?

Back a bit, before I became (temporarily!) a rabid exhumer of ancient D'Oyly Carte players, and was just a nice, ordinary musical historian, I used to pass by the occasional baritone or soprano and think 'hey, where did he/she suddenly spring from'. You know, a name you've never seen before, and bang! playing leading roles in good productions to fine reviews and the re-bang! Gone again. Name changed? Dead? But where did they COME from? I have, this week, re-bumped into a couple of these, in D'Oyly Carteland. So, I thought ... well, my grand bit of teckery on the Beauty Stone boyos is going to be a hard act to follow! .. I'd have one ... more ... last ... try ...
And bingo! I caught a fish!
Janet EDMONDSON. Springs to life in the 1880s, plays Leonora Braham's roles in a great chunk of the Carte repertoire, mostly in Boston, alongside folk such as Brocolini, Tom Karl, Henry Dixey, Arthur Wilkinson, Alice Carle ... then switches to starring herself in Canada, writing ... and by the end of the decade is gone again. Married? Name changed? Dead? Damme, it's too bad: who was she?  All I had were these delicious notices, David Stone's summary of her G&S career, and this photo ... such a sweet little Arcadian shepherdess .. a year on so into her career, and all of, doubtless, twenty years old. 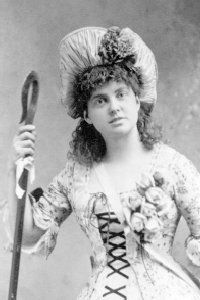 Like Hell. Madame was thirty-four, a wife and the mother of six ... but it's taken me half a day to find that out. First, I had to work out where 'Miss Edmondson' came from. Scotland? America? England? Ah, yes! She advertises 'pupil of Randegger'.. 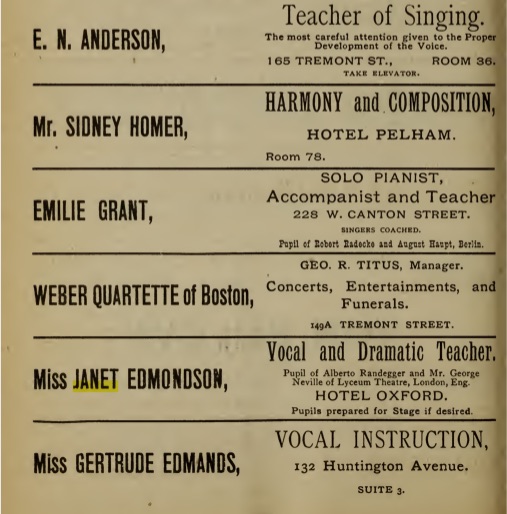 And there she is, June 1880, at St James's Hall, London: singing Elizabeth Philps's 'Forget-me-not' at that lady's very elegant concert. Mrs Edmondson. No, no. That can't be. She's always 'Miss' in America. See: in August a snippet in the US trade press saying that MISS Edmondson 'studying for the operatic stage and singing in concerts in London' has arrived back in America? Back? Slowly, as I worked through the career, little tips surfaced: she had a daughter ... she had a sister, Mrs Lillie ...  mentioned in a surviving letter .. 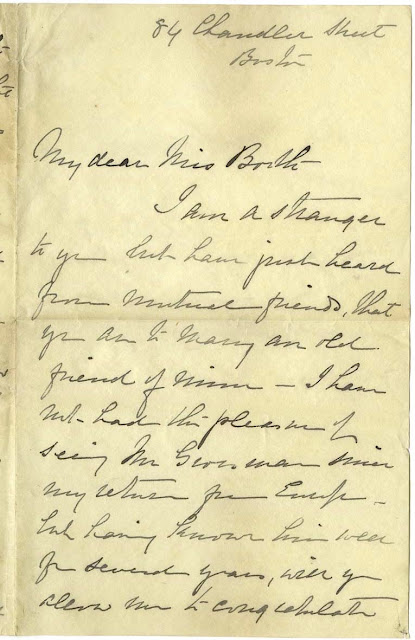 Signed Janet Edmondon Walker. Yes, around 1900 she becomes Mrs Walker. But the daughter ...?
Plod on.
1881 playing Petrita in Donna Juanita with H B Mahn and Jeannie Winston. 1882, with the Boston Ideals, no less, as Angela to the Patience of Marie Stone, with Lillian Russell in the same role (and, I doubt not, understudying in each case) 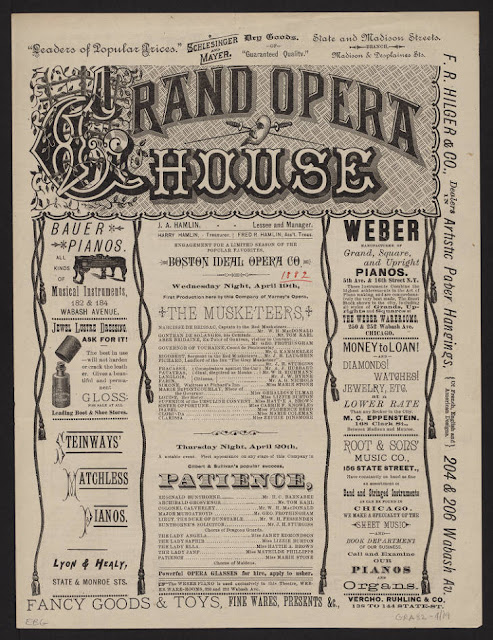 Then off to Boston, as leading lady of the troupe which was to baptise the new Bijou (ex-Gaiety) Theatre. 'Sweet-voiced' Janet took the role of Phyllis in Iolanthe .... 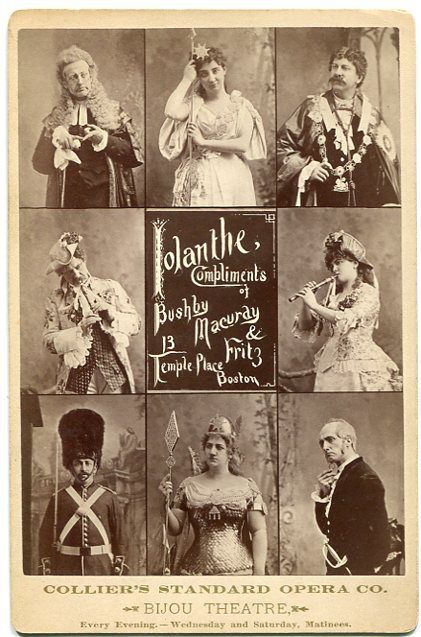 The Bijou followed up with the new musical Pounce, with Janet again as ingenue, then mounted The Sorcerer in which she scored as Aline. When she missed a couple of performances, she was depped by ... Geraldine Ulmar. Next up was the Edward Solomon piece Virginia, with Janet in the title-role, which was then taken on the road ...  Back in Boston, in February 1884, she took the title-role in Princess Ida, for John Stetson, and she scored again while, down south in New York, in Carte's own production, Cora Tanner was doing rather poorly. 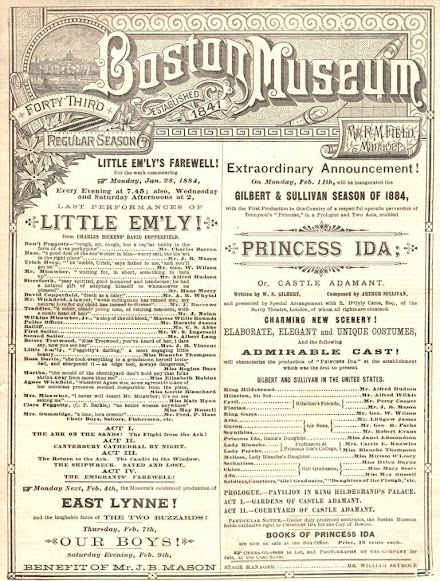 Finally came the news: Miss Edmonson was to put together her own company, and had taken the Chrystal Opera House in uptown Montreal for the summer. Janet opened 8 June 1885 with a good company -- Fessenden, Arthur Wilkinson, Joseph Greensfelder, Alice Carle, Percy Cooper -- and a new musical: J C Robinson and C J Bush's A Very Odd Trick. It was far too tricky -- a clever but rather University Common Room piece based on the game of whist, in which Janet played the Queen of Hearts -- and was swiftly replaced by The Sorcerer, The Pirates of Penzance, Princess Ida, Iolanthe, Patience, Neuendorff's The Rat Charmer of Hamelin ... Janet quickly got out of the Chrystal and moved to the Theatre Royal, but it was no use. She closed her season, and headed home to Boston.
Back home, she sang in concert with the Boston Pops Orchestra and the Boston Symphony Orchestra. she took part with the old pals, headed by the Wilkinsons, in a season at Oakland Garden, she penned pieces for the papers, and in 1889 she joined the Wilkinsons one more time, playing Bettina in La Mascotte in Portland ('a fine singer and actress'. And that was pretty well it. But now she is referred to as 'Mrs Edmondson Walker'. Hah! I thought. She has married, and retired.
Wrong. She had been married 20 years, She would be officially married for another ten. And she was really Mrs Edmondson Walker. Though she had never been Miss Edmonson. Her birth name was Janette Eldridge White, known as Nettie, and she had been married, at nineteen, to a young lawyer ...

So we can now write Janet EDMONDSON [WHITE, Janette Eldridge, Mrs WALKER] (b Binghampton, NY 5 October 1846; d ....). Well, it's an improvement with space for more improvement.
Father, James E White, was a Judge of the NY Supreme Court, mamma was Rhoda Elizabeth Waterman, daughter of a general. Her ten brothers and sisters included another judge, another general, a senator, a nun of the Sacred Heart, London, a writer of textbooks on mythology ... Mrs Lillie wrote too, so it was little wonder than Nettie, in later life, lifted a pen ...
She didn't have much time in her young days: she was busy with Llewellyn John (1867-1925), Gerald Griffin (1869-1909), Katharine Anne (1870-1900), Cecil Thomas (1872- ?), Rhoda Janet (1877-1970, Mrs Edwards) and Ellen Constance (1879-? Mrs Morse). But hey! What's this? Ellen says she was born in Austria ... so Janet was already on her travels, pregnant ... in 1879! I wonder where the other 5 babes were...
Here is Jeanette in Huntingdon Avenue, Boston in 1900 'vocal teacher', with Rhoda and Ellen, both 'teacher of languages', all chopping years off their ages ..  Nettie says she is a widow. She isn't of course.  Anymore than she is 46. Hubby is back over in Iowa, where he's been since before 1885, and they are in the process of getting divorced. And she is 53. Since she stopped performing, she rather oddly began calling herself Mrs Janet Edmondson Walker, but since it was, until 1900, correct, why not! 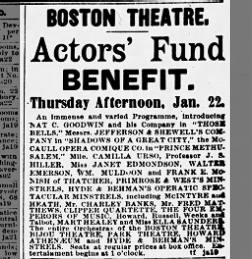 As well as writing (The New Governess, Fortune by Land and Sea), Nettie also took up directing amateurs, notably those of Harvard University for several years, but she would swap Universities in 1905, for the family removed to California. Alameda, it seems, for that is where Ellen married Captain Morse of the US Army in that year. And Nettie started directing the productions at Berkeley. I see them doing The Mikado and, goodness!, The Grand Duke ...
I don't know what happened after that. My last sighting of Nettie Walker or White is crossing the Atlantic in 1912. She says she's a widow and chops ten years off her age. I thought I'd chase up the children to see if she was living with one of them... well, Llewellyn went to Iowa with his father and became a printer; Gerald too ended up in Iowa as a lawyer; Katharine died in Boston of a haemmorhaged gastric ulcer, presumably with her mother, aged 29; Cecil started off as a stenographer, but found his way into stocks and bonds and ended up as the C T Walker Guarantor Trust, a banker and a Who's Who chap: he was still going strong in Buffalo in 1940; Rhoda seems to have had a very jolly life skimming around Europe, and Ellen got to go to the Phillippines as an army wife. But what became of Nettie?
Posted by GEROLSTEIN at 4:53 AM