Cartesians: the little soprano who remade herself... into a star!

It has become my hobby these last months to track down the 'whatever happened to' and the 'whence came (s)he' of the C19th D'Oyly Carte players. A number of them have tried to trick me by changing names in mid-career, so I have become kind of suspicious of artists who seem to have no past and no future. But I don't think I have come upon one quite so apparently determined to erase her past as the little lady who played the Princess Nekaya in Utopia (Limited) with the imported company in New York: Miss Aileen Burke. In her 'remake' of herself, she changed her surname, her date and place of birth, wiped her early career from her lifestory ... and, at fattish and fortyish, became a great big shining star in the West End musical firmament ...
Aileen [Daisy] BURKE (b Calcutta 14 February 1873; d London August 1939) was born in India. Not in London, four years later, as she would later claim in her Who's Who in the Theatre entry. Her father was a London commercial traveller by the name of Alfred David Burke (this she did admit!), her mother Emily Isabel[la] née Outhwaite, and they were married in India (I wonder what Mr Burke was travelling in) and had their first five chidren there before returning to Britain and Battersea. There they had a bunch more children (making ten in total), before father decided he'd had enough and did that mid-life thing of walking out on his family ...
In the meanwhile, Aileen had begun to study music and attended the Royal Academy. In see that, in 1893, she was commended in the contest for the Parepa Rosa Scholarship behind three ladies I don't know. And a few months later, she was on the road playing the Princess Nekaya in D'Oyly Carte's company.
She travelled to America to repeat her role, and following that season, remained in America for more than two years, appearing with Louise Beaudet's company (alongside C D Marius), at the Star Theatre as principal girl, opposite Irene Verona, in Sinbad and as the Duchesse of Parthenay opposite Lillian Russell in The Little Duke ('a dainty little singer with black hair and eyes) ... and then Miss Burke vanished. And Miss Aileen d'Orme 'pupil of Marchesi', Sbriglia e tutti quanti arrived in London in early 1897 ... and 31 March opened at the Shaftesbury Theatre in 'the Armenian opera' The Yashmak 'fresh from the Paris conservatoire ... making her stage debut'. 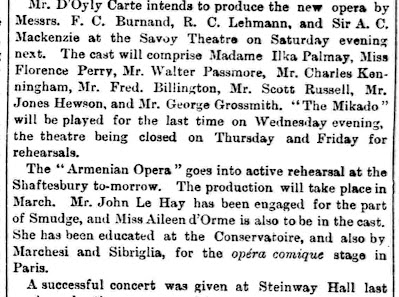 I think Mdlle d'Orme was recognised ('a newcomer, apparently, with a charming voice and appearance') but I can't see that anyone 'outed' her. But the www still features quotes such as 'Miss Aileen D'Orme was born in London of French and Irish parentage and completed her musical education in Paris ..'. 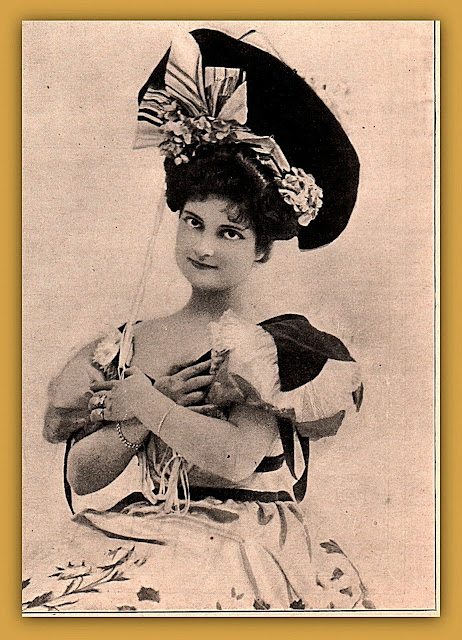 She sang 'Hush, little girl, don't cry' and Lambelet's 'La Vie' in The Yashmak, and then moved on to London's productions of The Wizard of the Nile (Abydos), The Royal Star (Lucy Jebb) and The Coquette (Nella) before she was cast to play at Daly's Theatre in the revival of A Gaiety Girl (1899), playing the Juliette Nesville role of the maid, Mina. She took over the part of Yung Shi from Florence Collingbourne in San Toy, succeeded Maggie May as Princess Mehelaneh in The Country Girl... 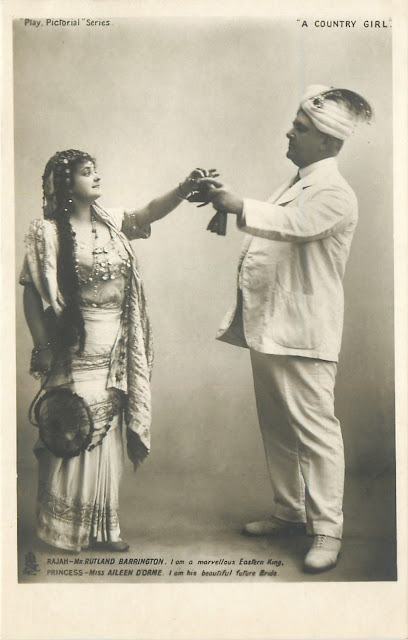 I'm not quite sure what happened next. I think it was a man. Anyway, she disappears from Daly's Theatre and a few years later is married to one George Earle Baker. Mr Baker was connected with mining speculation at Great Cobar in Western Australia ... she tells us that she 'retired on her marriage' (1908) and did not appear again until 1914. 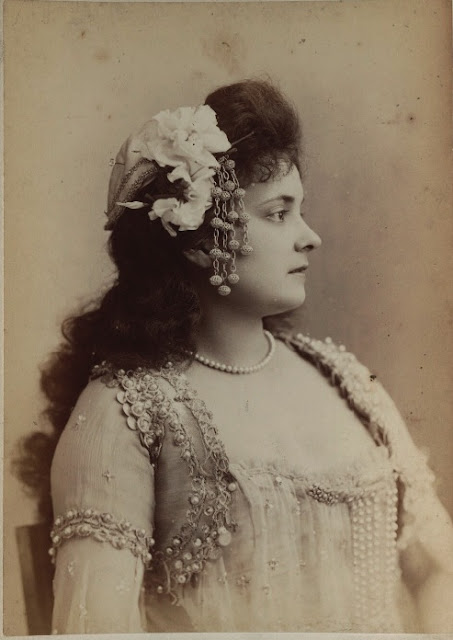 That appearance was (according to WWIT) in concert, and was followed in 1916 by the role that would make her a name: the plump and pleasing Alcolom, opposite the Ali of Courtice Pounds, in  the war-time spectacular Chu Chin Chow. 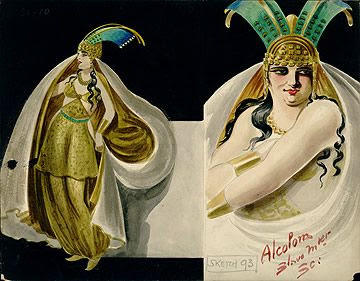 She duetted 'Any Time's Kissing Time' and, later, gave the beautiful 'I Long for the Sun' for five years.
Her domestic arrangements, however, took an opposite turning. Mr Baker's speculation went sour, he went bankrupt ... and he also began messing around. When Aileen divorced him, it was not Great Cobar which got the headlines, it was Chu Chin Chow! 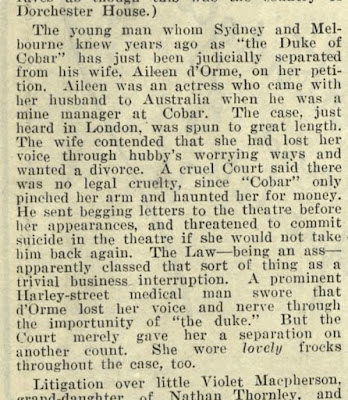 In the post-Chu Chin Chow years, Aileen went on a concert tour with Clara Butt, in 1924 Mrs Aileen d'Orme Baker 'dramatic soprano' can be heard on WEAF, New York, and, as late as 1930, I see her singing on British radio. She also made a number of recordings.