.
This photo caught my attention today. I don't know why. Perhaps it was the name 'Holman', which once played a part in American and Canadian musical theatre ... anyway, they have provided me with a few hours sport, and now they can have their five minutes in the limelight. 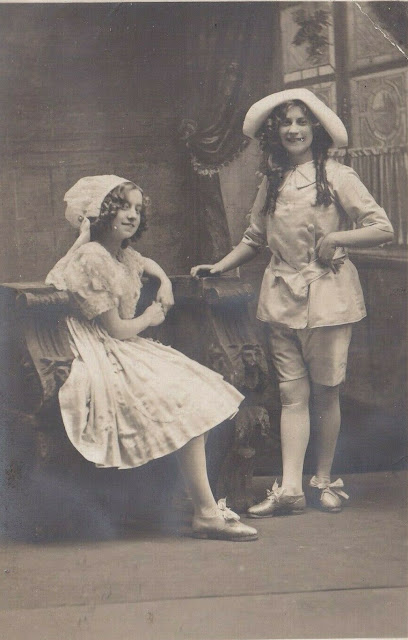 Yes, they were sisters. And, yes, their name actually was Holman. And they were a little supporting music-hall act for almost a quarter of a century. My first sighting of them is in 1897, 'tyrolean vocalists' at the People's Palace in Sunderland. My last is in 1920, at Derby ...  I would imagine this Mancunian photo was taken in the earliest days of the 20th century.

My first job was to find out who they actually were and whence they came. And that proved easier than it might have. Because on one of the rare occasions that they advertised in the trade press, to show off the fact that they had been playing the Babes in Babes in the Wood at Sunderland, they mentioned 'Mr John Holman' conductor (available) as well. Brother? No, father. Perhaps the John Holman RAM (!!) who was conducting at the Hartlepool Alhambra in 1893? So I went looking up around Durham way and ... 1906. John Holman, professor of music, 116 Granville Street, Grimsby ..

There isn't a lot to describe. 'Charming song and dance artists, ''Sing in pleasant style ... dance neatly'. The notices never say what they sang or danced, they didn't earn enought space for that. But they did what they did for more than 20 years, on the lower regions of bills at Hippodromes, Palaces and Empires from Exeter ('always heartily received in the West Country') to Dundee. They got their biggest press notice in Dundee, when Blanche got into a girlie dressing-room squabble, got a slap on the face from her victim's gentleman friend, and it all ended up in court. From where it was smartly kicked out.

Mostly, they appeared on bills made up of minor artists, performing pigs, dogs, acrobats, blackface comics, comedy jugglers, trick cyclists, progressively larger bits of cinematography, but I have spotted one or two familar names, from Harry Tate (1897) in kiddie days, to Walford Bodie and to Lydia Kyasht, Will Hays, Toby Claude, Daisie Irving and Marie Lloyd 'in her Paris gowns' during the war years ... 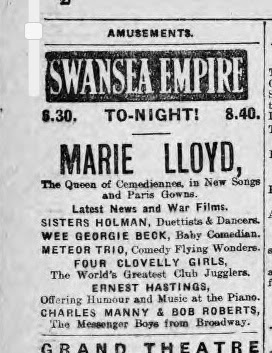 I don't know what happened to the sisters after the act broke up. I've chased all the sisters ..

Edith went back to her sewing machine, married a plasterer's labourer from Bawtry, Notts (Alfred Marshall) and I see her last in 1911 living with her sisters
Florence also plied her sewing machime, married a Mr Oswald Desmond Mather, had a daughter, Dorothy (Newcastle 1906) lost him, and lasted through till the 1950s.
Gertrude married a gent's outfitter from Chesterfield, Philip Sidney Smith. She too had children, of whom only a daughter, Margery (Chesterfield 15 August 1903) survived, and vanishes from my ken after 1911, when she is living with the Holmans and her husband is with his parents in Chesterfield. Doesn't look good.
Lilian strayed to Leeds to work as a waitress. She also strayed otherwise, too, and gave birth to three illegitimate babes before she married Harry Bowers, the father of the last two. Almost unfairly, she then had a long married life and died in Grimsby 24 December 1948. Harry lasted till the following year. Lillian's descendants have invested ancestry.com, so we actually have a photo of her ... 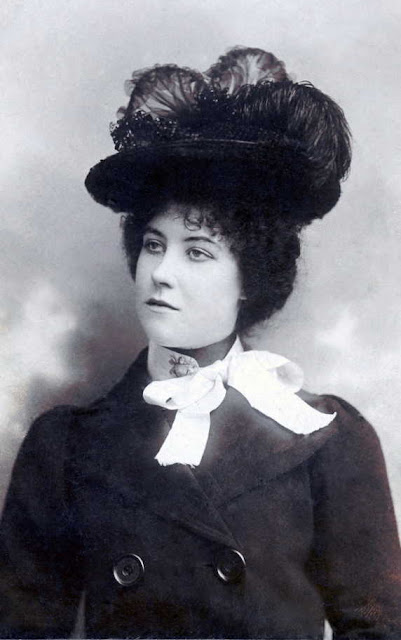 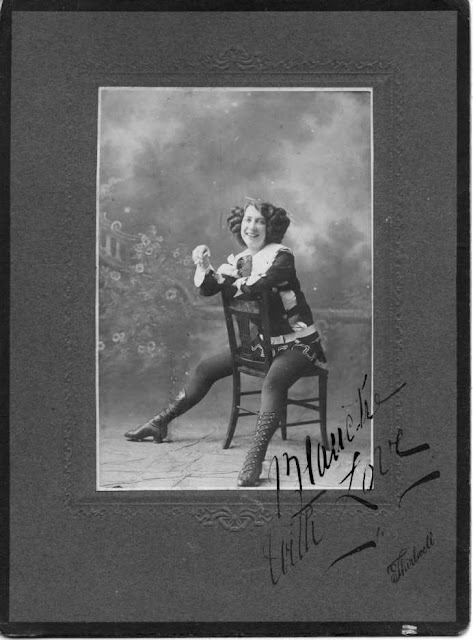 As for Beatrice ... well, the family says she died, unmarried, aged 60 in Leeds. So, maybe she did. She'd clearly dropped the 'Cornelia' ...

And that's them. The Sisters Holman. One of the thousands of 'acts' which provided popular entertainment to the music-halls of England in their declining days ...

Can anyone add any more information about them?

Posted by GEROLSTEIN at 9:28 PM