When one writes of James Garbett, there is an automatic roll-on to the name of Edward Rolle. All through the 1810s and 1820s, where you saw/heard one, you almost always saw/heard the other: singing together in duet, trio, and many a glee party. The Bath Harmonic ‘professional members’.

But the two men were alike only in that way. They had wholly different lives. Whereas the tenor, Garbett, seems to have led a quiet and comfortable bachelor life in Bath, with little or no other interest or activity than music, the bass Rolle was twice wed, with half a dozen children, at least two or three ‘day jobs’, fingers in all sorts of pastries … and he still managed to rack up a career as a vocalist at least as well-furnished as that of his friend, over an even longer period, and eventually outlived Mr Garbett by over thirty years. 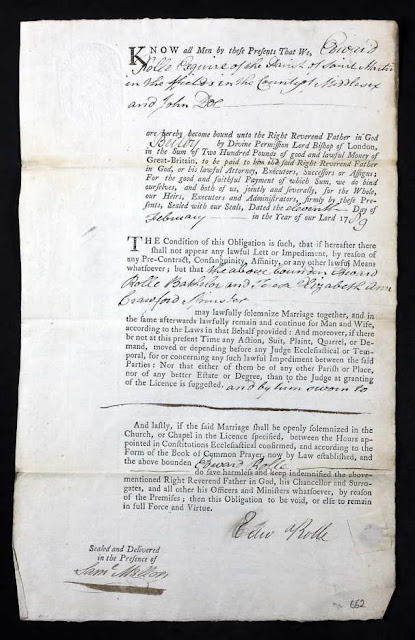 Edward Rolle was born in London, so the birth registers tell us, the son of a ‘barrister (Esq)’ of the same name and his wife, Teresa Elizabeth Ann née Crawford (m 13 February 1789). I think ‘barrister’ might have been exaggerating things a little: I see an Edward Rolle inducted as a law clerk in 1790, and spending time in Fleet Prison, presumably for debt, in 1792. But maybe that was a different Edward Rolle. There were one or two of them about. One of them was a Rev down Wiltshire way. ‘Of Salisbury Cathedral’, they said at his death, in 1791. Which puzzles me just slightly, because when our Edward first comes into view he is … ‘of Salisbury’. A relative of some sort? But throughout his life he always filled in ‘Putney’ as his birthplace. And two brothers were born in London, before I lose track of the 'barrister branch' of the Rolle family.

The first post-baptismal viewing mentioned comes when he is still ‘Master Rolle’. Boy soprano. It is 1804 (22 August) and he is billed as a solo treble at the year’s Salisbury Festival, where Mrs Billington is prima and one of the Mr Harringtons features. Now, a boy soprano who features in a Festival in a cathedral town has, I reckon, almost certainly, to be a chief singing boy from the cathedral choir. And I am sure that that is what teenaged Master Rolle was. Does it seem too much to assume, then, that E Rolle 14-year-old cathedral choirboy at Salisbury was in some way connected to the late Rev Rolle of Salisbury Cathedral? I can’t find it said anywhere. I suppose it could just be a coincidence. But ...

Skip on a bit. When Rolle died, aged 75, it was said that he had served over half a century, latterly as a College vicar choral, at Wells Cathedral (that was one of his ‘day jobs’). But here we are, a further decade earlier. Even though no one mentions Salisbury Cathedral. Just ‘of Salisbury’. Oh well. 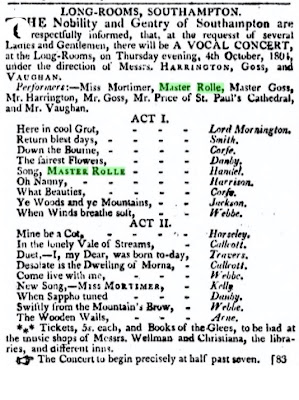 Edward only had a couple of seasons in the soprano limelight. But he was clearly the star boy of the area, appearing in concerts and Festivals with the favourite singers of the time and place, as well as such national identities as Mrs Second, Bartleman and Vaughan, and I see him, several times, featured in a solo piece of Handel or Carnaby while the men contented themselves with performing in the part-music. 28 November 1805, I see him at the Salisbury New Rooms in a ‘Lord Nelson Memorial’, and then … quiet.

Quiet for some two years, until he re-emerges in the small print of the Salisbury Festival 1807 (26 August). He is now Mr Rolle. Bass. And still ‘of Salisbury’. Over the next few years, I spot him singing at Winchester, Devizes, Andover, and other places between and beyond, time and again on bills with Mr and Mrs Harrington, until, in February 1815 his name appears on the programme (‘his first appearance at these rooms’) for Andrew Loder’s concert at Bath, with Loder and James Garbett, the Misses [Sarah] Wood and [Julia] Bartlett, Mrs [Mary] Ashe …

Those folk, the gentlemen and the ladies, were to become some of his most frequent collaborators over the years to come, and by 1817 he could be billed as ‘Mr Rolle, [late] of Bath’. The next chapter had begun. It was a chapter which would continue, voluminously, through the 1820s, and musically it so resembles the musical life of James Garbett, that I shall not repeat the details here. Just the differences.

Firstly, Edward Rolle was married (2 February 1812) to Miss Mary Ann Lambo[u]rn of Christchurch, Hants. At St Thomas's, in Salisbury. Their son, Edward was born the following year. There were to follow daughters Eliza (Mrs Frank Good), Mary Teresa (Mrs John Webster Hallam), Mary Ann (Mrs Orlton Cooper) and Amelia, and apparently one more son, Henry Jennings Rolle, who became a Bath chemist. And all of these were ‘born Wells’. So, it look as if 1813-5 marks Edward’s move from Salisbury Cathedral to Wells Cathedral, and to the city and church where he would spend most of the rest of his life.

I have spotted one or two wee Rolle-ian landmarks as we wander through the 1820s. An 1822 directory of Somerset has him living in Close Hall, Wells, described as a music teacher. But 1826 sees a vast change of occupation. His second ‘day job’. Edward Rolle became the landlord of the Swan Inn or Hotel, 18 Sadler Street, Wells. And there he would stay (with occasional ‘sellings up’ and diversions to the Piper’s Inn in Ashcott) for some thirty years. Now he didn’t just sing at those jolly festive club dinners and civic beanfeasts which supplied so much of a singer’s wages, and gentlemen’s entertainment, he catered for them as well! 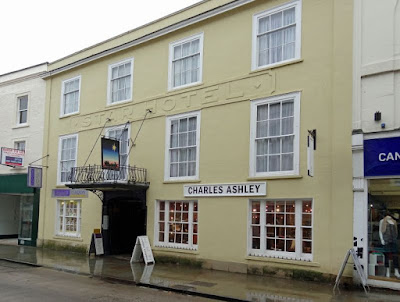 In the 1830s, his singing activity somewhat decreased. But life carried busily on. He became a city councillor and then, in 1841, wife Mary Ann died. Edward and unmarried daughter Amelia continued at the Swan. They are still there in the 1851 census, in spite of several attempts or ‘attempts’ to sell the lease, and seemingly some liquidity problems, which seems to have been caused by a feckless son-in-law. 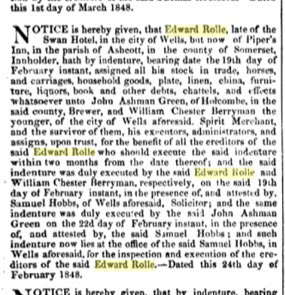 In 1855, Rolle remarried, a widow lady, Elizabeth Weston, 'relict of John Weston of Wells', and they can be seen in the 1861 census, no longer at the Swan (which seems to have been taken over by one Frederick C George) but back at Vicar’s Close, Wells. Elizabeth died there 7 November 1862. I don't know why Edward died in Brecon. His schoolmistress daughter, Eliza Good, and her ne'er-do-well vet husband had moved to Wales, but ...  But, anyway, he had lived a truly full life: not least, as a Somersetshire singer...

NB I havent followed up the children, but I find it interesting/amusing that Edward chose to christen his younger son 'Hery Jennings Rolle'. Because that was the name of the 17th century Somersetshire gent whose family went on to become the Lords Rolle ... connection or pretension?

PPS the family historians have had a hell of a go at this one, perverting the name of Rolle into Rollo or Kolle ...